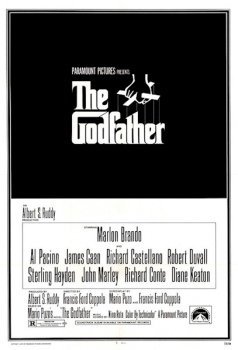 An offer you can’t refuse.

Based on
The Godfather, a novel by Mario Puzo.

The Story
1945: Michael takes his girlfriend to his sister’s wedding, where she’s introduced to his family, including his father, Vito — the Don of New York’s Corleone crime family. Over the next decade, decisions made by the family lead to escalating gang war, and just as he thought he was out, Michael is pulled in to the family business.

Our Hero
A good college kid who dropped out to fight in World War 2, Michael Corleone has distanced himself from his family’s criminal activities… until a series of events find him drawn inescapably in.

Our Villain
According to the AFI, Michael is the 11th most iconic villain in film history. Of course, he winds up a Mafia Don, so he’s hardly a good guy in the traditional sense, but we’re surely on his side, at least throughout this film. Even in that context, I think you could argue the titular Godfather himself, Don Corleone, is the villain: his one son who tried to escape the life of crime is pulled into it after a string of poor choices and unfortunate incidents land the family in trouble.

Quote Most Likely To Be Used in Everyday Conversation
“I’m gonna make him an offer he can’t refuse.” — Don Corleone
(According to the AFI, this is the second best movie quote ever.)

Memorable Scene
The opening is the perfect scene-setter for the movie. On the day of his daughter’s wedding, Don Corleone hears requests for favours. One man asks for retribution against men who assaulted his daughter, which he has been denied by the legal system. Corleone questions why the man didn’t come straight to him, but ultimately grants the grovelling father his wish. Here, the film has established its pace, its tone, and themes of family, respect, and the important point that these criminals think of themselves as the honourable ones.

Write the Theme Tune…
Italian composer Nino Rota composed the majority of the soundtrack (Carmine Coppola contributed some music), including the famous main theme. Apparently a Paramount executive described Rota’s score as too “highbrow” and urged it be ditched, but Coppola won out. Considering the music’s subsequent fame and familiarity, I think we know who was right.

Technical Wizardry
The dark but amber-tinged cinematography by Gordon Willis is gorgeous. It’s stuff like this that high definition was made for.

Making of
Cinematographer Gordon Willis insisted that every shot represent a point of view, placing his camera around 4ft off the ground and keeping the angle flat. Coppola persuaded him to do a single aerial shot, in the scene when Don Corleone is gunned down, by telling Willis that the angle represented God’s perspective.

There’s a first time for everything…
According to IMDb, “Coppola turned in an initial director’s cut running 126 minutes. Paramount production chief Robert Evans rejected this version and demanded a longer cut with more scenes about the family. The final release version was nearly 50 minutes longer”. Studios love extended cuts for DVD these days, but choosing to take up more time in theatres? Not bloody likely.

Next time…
Debate rages as to whether sequel The Godfather Part II is an even better film. Either way, it was the first sequel to win Best Picture (and still one of only two). In 1977, Coppola edited the two films together in chronological order, along with some deleted scenes, to form The Godfather Saga miniseries, aka The Godfather: A Novel for Television. (Although it’s not been released on home media since VHS, it has been repeated on TV in HD, meaning copies can be… acquired.) Over a decade later, Coppola turned his duology into a trilogy with The Godfather Part III. Although generally reviled whenever it’s spoken about, it has a not-bad 7.6 on IMDb and was also nominated for Best Picture, as well as six other Oscars. (Part III was later added to the chronological cut to make The Godfather Trilogy: 1901-1980.)

What the Critics Said
“It seems that the first question everyone asks about The Godfather is concerned with Marlon Brando’s interpretation of the title role. That is the way the movie has been programmed and promoted: Brando, Brando, Brando, and more Brando. The word from advance hush-hush screenings was wow all caps and exclamation point. […] So to answer belatedly the first question everyone asks about The Godfather: Brando gives an excellent performance as Don Vito Corleone [however,] though Brando’s star presence dominates every scene in which he appears, the part itself is relatively small, and there are other people who are equally good with considerably less strain, among them the extraordinarily versatile James Caan as the hot-headed, ill-fated Sonny Corleone, Richard Castellano as the jovially gruesome Clemenza, and Robert Duvall as Don Vito Corleone’s non-Italian consigliere, Tom Hagen.” — Tony Ortega, The Village Voice

What One Single Critic Said
“I don’t see how any gifted actor could have done less than Brando does here. His resident power, his sheer innate force, has rarely seemed weaker. […] Al Pacino, as Brando’s heir, rattles around in a part too demanding for him. James Caan is OK as his older brother. The surprisingly rotten score by Nino Rota contains a quotation from “Manhattan Serenade” as a plane lands in Los Angeles. Francis Ford Coppola, the director and co-adapter (with Mario Puzo), has saved all his limited ingenuity for the shootings and stranglings, which are among the most vicious I can remember on film. The print of the picture showed to the New York press had very washed-out colors.” — Stanley Kauffmann, New Republic (the one and only critical review on Rotten Tomatoes)

What the Public Say
“Few people could have anticipated during the course of adapting Mario Puzo’s best-seller The Godfather to the big screen that it would become a lasting legacy in cinema. Forty-plus years have passed since its theatrical release, yet it stands the test of time as not only one of the greatest depictions of a crime family, but as one of the best films ever made. […] That lasting popularity isn’t a fluke; the Godfather films stand the test of time because these aren’t just movies, they’re cultural touchstones.” — Colin Biggs, Movie Mezzanine

Has it really been almost eight years since the IMDb Top 250’s unshakeable #1 was usurped? The Godfather sat pretty at the top of that user-voted ranking for the best part of nine years, its balance between critically-acclaimed filmmaking finesse and quotable gangster machinations almost perfectly calibrated for that website’s prevailing demographic. (It’s since settled at #2, hardly a failure.) It’s not just IMDb users, though: The Godfather places 6th on the latest iteration of The 1,000 Greatest Films, the as-near-to-definitive-as-you-can-get poll-of-polls compilation. It’s for the same reasons, really: The Godfather combines thriller elements and striking violence with a strong understanding of character and a believable exploration of organised crime, a world as fascinating as it is morally repulsive, for a whole that is as artistically accomplished as it is palatable to the mainstream. 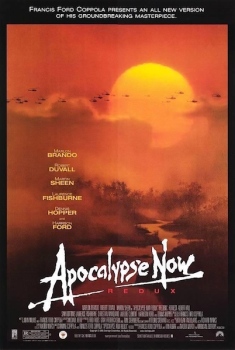 Francis Ford Coppola presents an all new version of his groundbreaking masterpiece.

* This appears to be due to the Blu-ray removing the end credits, but the number of disc reviewers who haven’t even noticed the discrepancy is remarkable.

Based on
Heart of Darkness (loosely), a novella by Joseph Conrad.

The Story
In the middle of the Vietnam war, burnt out soldier Captain Willard is given a top-secret mission: locate US Army Colonel Kurtz, who’s gone renegade and is leading his own personal army in unauthorised attacks, and terminate his command. Travelling up the river on a Navy patrol boat, its crew unaware of Willard’s goal, they see snapshots of the war and the elements of human nature it exposes — the very horrors that drove Kurtz insane…

Our Hero
Martin Sheen is Captain Benjamin Willard — not exactly a hero, but certainly the narrator. Already mentally wracked by his experiences in Vietnam, he may not be the best person to send after another officer similarly mentally afflicted…

Our Villain
Marlon Brando — top billed, only on screen for minutes, and a nightmare to work with… but another performance for the ages as the rambling, insane, but insightful, Colonel Kurtz.

Best Supporting Character
A Golden Globe, a BAFTA, and an Oscar nomination rewarded Robert Duvall for his turn as the commander of a helicopter unit, Lt. Col. Kilgore. More than that, though, was true immortality in the form of the movie’s most famous quote: “I love the smell of napalm in the morning.”

Memorable Quote
Colonel Lucas: “When you find the Colonel, infiltrate his team by whatever means available and terminate the Colonel’s command.”
Willard: “Terminate the Colonel?”
General Corman: “He’s out there operating without any decent restraint, totally beyond the pale of any acceptable human conduct. And he is still in the field commanding troops.”
Civilian: “Terminate, with extreme prejudice.”

Memorable Scene
The sound of unseen helicopters circle. The Doors playing. A pretty forest… which explodes into flame, under the barrage of a napalm attack. One of the most iconic opening scenes.

Technical Wizardry
Apocalypse Now was one of the films that pioneered the creation of surround sound, now the industry standard. Nowhere is it better exemplified than in that opening scene, with the helicopters circling the room.

Making of
“My movie is not about Vietnam, my movie is Vietnam.” Apocalypse Now was a notoriously troubled shoot, for all kinds of reasons, from an uncooperative Brando, to Martin Sheen’s heart attack, to the cast and crew’s copious drug use… Originally scheduled to shoot for six weeks, it ended up filming for 16 months, and took nearly three years to edit.

What the Critics Said
“this might be the most audience-friendly art-house film ever made, and that’s where the sheer majesty of Coppola’s daredevil balancing act comes into true focus. Coppola’s art is stripped of pretension; what lies on screen may as well be Coppola’s — and probably several other peoples’ — heart, laid bare for all to see, somehow expressed through arguably the most populist of all mediums. It may be messy, but it’s also vivaciously alive.” — Rob Humanick, Slant

What the Public Say
“The most critically acclaimed movie of 2001 was made 22 years ago… The new material isn’t entirely necessary, and some may find it excessive… But Redux’s virtues far outweigh its flaws. Apocalypse Now in any version remains one of the richest, most extravagant moviegoing experiences of my life.” — Jeffrey Overstreet, Looking Closer

The first (and, indeed, last) time I watched Apocalypse Now was shortly after the Redux version had been released, when Francis Ford Coppola was busy proclaiming it was the only version that would be made available ever again. That didn’t last, of course. Adding some 49 minutes of footage to the praised theatrical version, Redux divides viewers and critics on whether the extensions make a classic even better or just dilute it. If there’s a consensus, it’s that in either version this is a great movie. I’ve never got round to the original cut to compare for myself, so it’s the longer one that makes my list. My favourite quote about it comes from Danny Boyle: “It’s imperfect; which every film should be.”