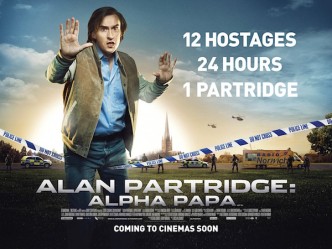 Steve Coogan brings his popular character to the big screen. When Partridge’s radio station colleague Pat (Colm Meaney) is fired, he takes a group of employees hostage at gunpoint. At Pat’s request, Partridge is sent in to negotiate.

Some claim the film hinges on in-jokes and references to the numerous Partridge series, but that’s poppycock: as someone who’s never watched one, I didn’t even sense I was missing something. Indeed, even as someone who’s never seen the character’s appeal, I thought the film was hilarious. A bit long, and it doesn’t really know how to end, but, otherwise, consistently funny. 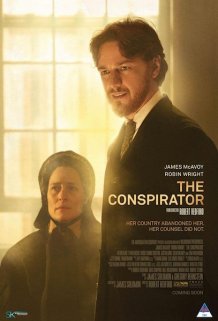 Although John Wilkes Booth is famous as the man who assassinated Abraham Lincoln, he was merely the person who pulled the trigger: eight people were tried for conspiracy to kill America’s 16th President; this is the story of what happened to the only woman among them.

Or, rather, it’s the story of the young lawyer who is forced to represent her. Rather than cave to pressure and more-or-less let the prosecution have their way, he fights her corner against a ludicrously biased system that would execute her without trial if only they could. The sheer weight of this bias — and the fact the story is from history, rather than a created-for-the-movies tale (with all the idealism that would bring) — means there’s a sort of crushing sense of inevitability about how it plays out. Some have criticised the film for lacking tension, a complaint that I think is to some degree misplaced — especially as, not knowing what happened, I felt it was fairly tense towards the end.

As the lawyer, James McAvoy has to lead the film against a few experienced names, but he can hold his own (which I suppose shouldn’t be a surprise at this point) and is easily the best thing in the movie. OK, so he’s saddled with a well-worn “lawyer so dedicated to the case he sacrifices his personal life” character arc, but that doesn’t mean he plays it so half-heartedly. The only acting weak link is Alexis Bledel, who somehow seems far too modern;

or rather, like an actress versed in playing modern characters struggling gamely with a period one, and coming up short.

The Conspirator takes a footnote from history and turns it into an engrossing legal drama. What it lacks in originality is made up for through compelling performances and the exposure of little-known facts and incidents surrounding one of American history’s most famous events.