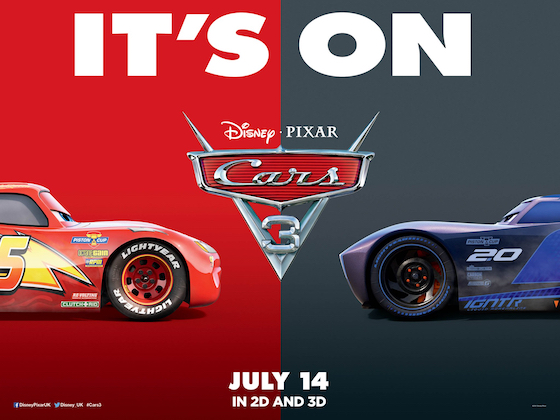 At this point I think it’s fairly well known that the Cars movie series continues not because of any artistic desire on the part of Disney/Pixar, but because the toys the films generate sell like hotcakes. Indeed, that situation hasn’t necessarily changed with this third instalment: apparently Cars 3 features 65 different individual racers, more than both the previous films combined. And several of those appear kitted out in different paint jobs. Disney gotsta make that toy money! The disregard with which they hold the actual movies is perhaps demonstrated by the fact this third one is helmed by a first-time director, Brian Fee, whose previous credits are as a storyboard artist on a couple of Pixar productions. Maybe they lucked out, then — or maybe they actually knew what they were doing promoting him — because I think this is easily the best film in the Cars trilogy.

Beginning with nary a reference to the events of Cars 2, racer Lightning McQueen (Owen Wilson) is back doing what he loves: racing. That’d be American-style racing, i.e. constantly turning left for hundreds of laps. Anyway, turns out there’s a new generation of hot young racers, who are less on their way up and more already here, led by Jackson Storm (Armie Hammer). They use advanced training techniques and statistics to beat the old guard — soon all of Lightning’s contemporaries are choosing to retire or being forced out, leaving him the last one standing… until he crashes in the final race of the season. Is his career over? Well, what do you think? With the backing of a new sponsor, Sterling (Nathan Fillion), and all the latest high-tech gear, Lightning sets to work training with young wannabe-racer-turned-coach Cruz Ramirez (Cristela Alonzo). But as he struggles to regain his mojo, perhaps there’s something to be said for the old ways after all… 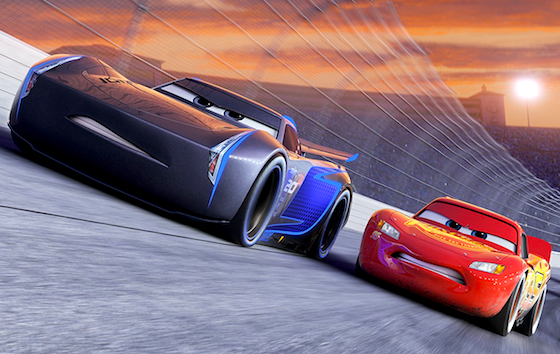 Although I wouldn’t say sports movies are my bag, I think Cars 3 probably benefits from taking a more clean approach to that genre, ditching all the spy hijinks distractions of the last one. That purity of genre keeps it straightforward and focused. It also re-centres itself on Lightning McQueen, shoving Mater (Larry the Cable Guy) back into a cameo-sized supporting role, which is about where he belongs (I wouldn’t say he’s likeable in small doses, but he’s tolerable). It still finds room for humour and levity, just in a more natural, less goofy way.

Around that, it actually takes a run at some weighty themes — specifically, old age and obsolescence — and carries through on them too, with a finale that goes for more of a “finding worth in what you do next” ending rather than a “still got it (for now)” one. Such maturity means it’s perhaps more suited to Pixar’s grown-up fans than their young ones — it’s a surprisingly serious movie, in fact, without being po-faced about it. That said, you could probably play down the thematic stuff and just be entertained: there are still good set pieces, both action-based and comical, to keep the right family-friendly tone.

It makes for a winning combination. Cars 3 may not trouble the upper echelons of Pixar’s greatest achievements, but it is the best of their Cars movies — the first of the trilogy I remember genuinely enjoying, rather than just finding tolerably okay. That might sound like a low bar to set, but Cars 3 clears it admirably.

Cars 3 is available on Sky Cinema from today.