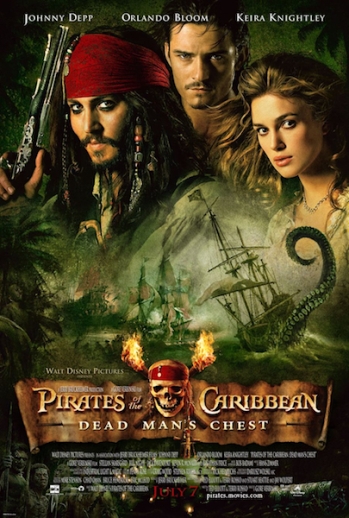 Captain Jack is back

Here’s the first in a sporadic new series of posts, inspired by my 100 Favourites entries, which I’ll be using to plug some of the gaps in my review archive. As a good starting example, this is the only Pirates of the Caribbean film I haven’t covered before.

Based on
Pirates of the Caribbean, a theme park ride at Disneyland.

The Story
On their wedding day, Will Turner and Elizabeth Swann are arrested for piracy. To secure a pardon, all they have to do is bring in Captain Jack Sparrow. Meanwhile, the aforementioned pirate captain is hunting for a key that he can use to unlock a chest that contains leverage he may be able to use to escape a debt to the horrifying Davy Jones…

Our Heroes
Jack Sparrow (or, as half the characters pronounce it, Jack Sparrah), the pirate captain who looks like a drunken fool but is actually in possession of a sharp mind. Also Will Turner, the swashbuckling ex-blacksmith determined to prevent the execution of himself and his beloved. That would be Elizabeth Swann, the governor’s daughter who is altogether more capable than would be expected of a woman from this era.

Our Villains
The pirate-hating East India Company is represented by the scheming Cutler Beckett, who seeks to rid the seas of pirates. To do so, he intends to control Davy Jones, captain of the Flying Dutchman. A tentacled terror, Jones seeks primarily to add more damned souls to his crew — including one Jack Sparrow…

Best Supporting Character
Will Turner’s father, Bootstrap Bill, was condemned to the ocean’s depths, where he ended up committing himself to servitude on Davy Jones’ ship. Well, unless Will can find a way to set him free…

Memorable Quote
Elizabeth Swann: “There will come a time when you have a chance to do the right thing.”
Jack Sparrow: “I love those moments. I like to wave at them as they pass by.”

Memorable Scene
A large chunk of the climax is a set of interconnected sword fights that most famously include three men duelling each other inside a runaway waterwheel. And while that’s good, my favourite bit has always been Elizabeth, Pintel and Ragetti fighting off Davy Jones’ crew while sharing two swords (and a chest) between the three of them.

Truly Special Effect
Davy Jones is an incredible creation, the writing mass of CGI tentacles that make up his face conveying a slimy physicality that remains impressive even as some of the film’s other computer-generated effects begin to show their age.

Previously on…
Inspired by a Disney theme park ride, nobody expected much of Pirates of the Caribbean — or, as it was hastily subtitled once someone at Disney realised this could be the start of a franchise, The Curse of the Black Pearl. As that someone knew, it turned out to be something very special. Dead Man’s Chest retrofits it into being the first part of a trilogy.

Next time…
The aforementioned trilogy concludes with At World’s End, which was shot back-to-back with Dead Man’s Chest and so wraps up its many dangling plot threads. The series continued with standalone instalment On Stranger Tides, while this year’s Dead Men Tell No Tales, aka Salazar’s Revenge, looks as if it seeks to tie the whole shebang together.

The Pirates sequels have all come in for a lot of criticism ever since their first release. It was inevitable, really: the first is basically a perfect blockbuster action-adventure movie, something any follow-up would struggle to live up to. However, I think Dead Man’s Chest has improved with age. It lacks the freshness and elegant simplicity of its forebear, true, but it still has inventive sequences, memorable characters, impressive effects, and a generally fun tone, even as it’s setting up masses of mythology that will only be fully paid off in the next instalment. That also means it doesn’t quite function as a standalone adventure. But if you readjust your focus slightly, so that the film isn’t about beating Davy Jones, but instead about finding the chest and settling Jack’s debt to Jones, it’s more self-contained than it appears.

The fifth Pirates of the Caribbean movie, under whichever subtitle they’ve chosen for your country, is in cinemas from today.