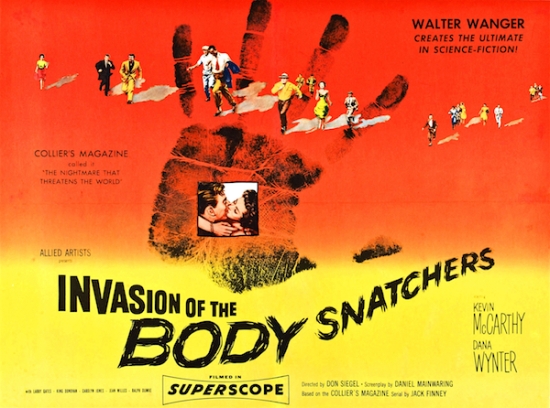 A sci-fi thriller about a stealth alien invasion using human duplicates (clue’s in the title), this original film version of the oft-remade Invasion of the Body Snatchers is best not at genre-movie chills, but at evoking and commenting on paranoia and what causes it.

Thematically, the narrative of insidious outsiders slowly replacing good honest people with braindead versions who are on their side has been read as either anti-communist or anti-McCarthyite, with some critics claiming the framing story (more on that in a bit) changes it from the latter to the former. Allegedly none of these themes were intended — not by the author of the original story, the screenwriter, the producer, or the director. Which doesn’t mean you can’t see them there. Indeed, director Don Siegel felt the anti-McCarthy subtext was inescapable, but he tried not to emphasise it. Whichever reading you prefer, or none, the sense of unease, distrust, and lurking danger that the film creates are a peerless reflection of paranoid feelings.

Although I deemphasised the genre aspect above, that doesn’t mean it lacks for sophistication there either. It’s as much a thriller as it is science fiction, and more mature in that regard than what’s commonly brought to mind by the phrase “50s sci-fi movie” (whether that’s fair or not). The way the mystery slowly unravels — the calmness of it; how even our heroes unwittingly allow some of it to happen — sucks you slowly deeper into its anxious grip. (“Slowly” being a relative term, because this is a short, quick movie.) Nonetheless, the most outright SF elements — the plant-like pods that the clones emerge from — are suitably creepy. Not in themselves, but when they first burst open and the bodies inside begin to ooze out… Though not strictly a horror movie (at least not as we’d define it today), those moments are chilling. 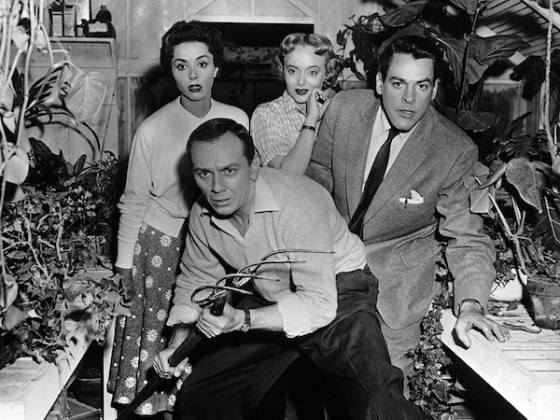 The impact of this sequence is supported by the black-and-white photography, which helps obscure any cheapness or amateurism to be found from the era- and budget-restrained special effects work. But such photography benefits the film as a whole, too, with some great film noir visuals during nighttime scenes. Siegel had previously helmed several such crime pictures (and would go on to a couple more) and it’s clear those skills crossed over. It also works very nicely with the film’s paranoia — what’s lurking in the shadows?

In some respects it’s amazing Invasion of the Body Snatchers is as successful as it is, because the studio chose to dick around with it in a couple of ways. Originally the film had some humour, which (as I think we all know by now) definitely can have a place in a horror movie, generally to help manage tension levels. Despite successful test screenings in which the audience screamed or laughed as appropriate, the studio ordered the humour be cut. I guess they then felt they’d made the film too glum, because they next ordered the addition of bookend sequences, against the wishes of both the producer and the director. It’s clear these couple of scenes were shot much later, with much less care given to their quality. They do somewhat detract from the pervading pessimistic, bleak, increasingly hopeless tone — which was why they were added, of course, so at least in that respect they’re a success.

Those late additions aren’t bad enough to ruin the film, however, which still comes away as a well-made exercise in tension.