Notorious for having numerous cuts forced upon it by censors, over 40 years after its initial release Witchfinder General — now uncut — seems almost tame. But gore and sadistic violence certainly aren’t the main attractions — there’s a lot more to the film than that.

Though I’m sure it was quite horrific in its day, there’s nothing here to rival the gore or gruesomeness of today’s horror movies; or, indeed, of horror movies being produced in other countries around the same period. Not that I’m advocating censorship, but one advantage to the previous cutting of the film is that it’s been restored from vastly inferior sources (it looks about VHS quality to me), making it possible to note what the censors felt needed removing. It’s interesting that, with only one brief exception, all the cuts are of violence to women, while similar violence towards men remains intact. Very moral.

(There are two ‘complete’ versions available now, often labelled the Director’s Cut and the Export Cut. As usual, Movie-Censorship.com has more details, but there seems to be no difference in violence (despite what IMDb may claim) — the latter merely uses some alternate takes,

shot against Reeves’ wishes, featuring needlessly topless wenches. This is the cut shown by the BBC.)

If the violence isn’t disgustingly gory, what’s truly horrific is how real it is. I have no idea if the torture and execution methods are historically accurate (the lead characters were real people but the plot is far from historically accurate), but the opening hanging is nasty due to the woman’s distress, the later burning tortuous because we know that, at some point in history, for whatever reason, this kind of death penalty was dolled out… If it’s horrific or scary it’s down to the threat of violence, or the cynical sadism with which people are tortured, rather than gory special effects (indeed, the blood on display is marvellously fake) or supernatural goings-on (of which there are resolutely none).

In fact, if we’re discussing genre, it’s more like an historical action-adventure, with soldiers dashing around the countryside, horseback chases, bar brawls, ambushes, and the occasional sword fight. If you changed the villain from a witchhunter who tortures and murders in Very Nasty Ways for money, to a dastardly chap who just stabbed people for money, the film would still function and the controversy would instantly evaporate. I’m not saying they should have, because that’s not the point; just that, in structure and (in many places) tone, 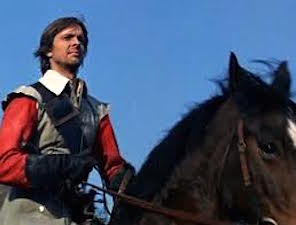 Tom Baker (not that one) and director Reeves’ screenplay (adapted from Ronald Bassett’s novel and nothing to do with the inspiration for its US title, Edgar Allan Poe’s poem The Conqueror Worm) adds a surprising amount of depth for either genre. It largely eschews the politics of the era — both the good and bad characters are on the side of Cromwell, the civil war only cropping up to provide period detail or motivation for characters’ movements — instead developing character and thematic interest.

Take hero Richard Marshall’s relationship with his beloved Sara’s guardian uncle, John Lowes. Lowes dislikes both Richard’s cause and his prospects, but is prepared to condone their marriage so Sara can escape the witchfinder’s path. Or the myriad minor characters who are well prepared to do as they’re told, or report people as witches just to get rid of them, often in silent agreement with the witchfinder and/or magistrate that everyone knows these people aren’t guilty of any real crime, but are still prepared to say or do whatever because someone wants rid of them. Thematically, one can read points about the corruption power can bring, in particular abuse of political situations. 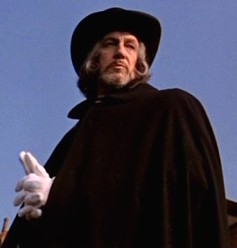 Best of all is the witchfinder himself, excellently portrayed by horror stalwart Vincent Price. Indeed, all the credit may lay with him, because it’s his line deliveries and uncertain looks that make the character conflicted early on, a man who may believe he is genuinely doing good for Christian values, but is seduced down darker paths by money, power, lust, and the prospect of revenge. When he allows himself to be lured to Sara’s bedroom as payment for leniency on her uncle, we’re uncertain if he’ll take what’s intended or use her loose ways as proof of witchery. That it’s the former quickly indicates how seriously he takes his espoused Christianity.

In the rest of the cast, Ian Ogilvy makes for a suitably dashing, morally centred hero as Richard, while Robert Russell is equally suited to the part of brutish, loutish, but insightful torturer Stearne.

The picture is nicely shot, with a suitable realism to the locations. Though one of the most horrific things about the whole movie is some of the most dire day-for-night footage I’ve ever seen — it seems to consist of leaving the sky rather bright while everything else is darkened 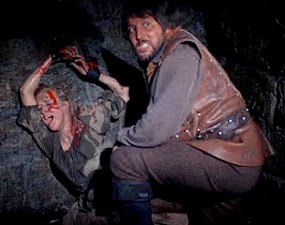 to near-silhouette levels of blackness. It’s even less convincing than that fake blood. I enjoyed the score too. A completely new one was written for the US release, but I presume this was the original because it was slightly calmer and more haunting than one might expect from an action-adventure-horror movie (which I presume was the reasoning for the replacement).

Despite the controversy, Witchfinder General will no longer please the gore-seeking brigade of certain horror fans — no bad thing. While it’s undeniably sadistic in places, it’s appropriate for the dark, realistic theme of the story. It may not be factually accurate, but it conveys well the sense of a dangerous, violent, morally bankrupt era. Its place as a British horror classic is well earnt.