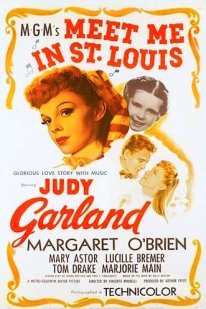 Someone (who exactly is long lost to the depths of my memory) once observed that, though a lot of people claim to not like musicals, they’re quite happy to acknowledge their love for The Sound of Music, or Grease, or Disney films, or (these days) Mamma Mia, apparently unaware that all those bits where people start singing make those films musicals. I expect such a person’s defence would run along the lines of affirming they like those musicals, but don’t like musicals on the whole. Despite its occasional fair placing on lists of great musicals — or even great films, sometimes — I think Meet Me in St. Louis would fall into that second group.

The film is based on Sally Benson’s autobiographical stories, collected as 5135 Kensington, though at times it reminded me of Pride & Prejudice — a family of daughters seeking marriage — albeit a version of Pride & Prejudice with much of the dramatic tension removed. For instance, Austen’s tale spends a long time creating a bad impression of Mr Darcy, only to eventually reveal his (mostly) good intentions. St. Louis, on the other hand, manages all of five minutes (if that) in which John Truett (the Darcy-ish character) is suspected of having done something dastardly before the truth is revealed. 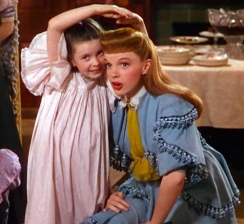 Judy Garland is fine in the lead role — still playing a teen, despite being 21, but suitably distant from Dorothy. Margaret O’Brien receives prominent second billing in the role of ‘Tootie’, despite being just seven years old. She was, I learn, something of a star at the time, in spite of her young age, which perhaps explains the (arguably) undue prominence in both the credits and the film itself. That said, she’s a rather good actress, and picked up an Oscar for her performance here (and other roles she played in 1944).

Most of the time Meet Me in St. Louis ambles along agreeably enough, throwing in a few nice songs — including well-known numbers like The Trolley Song and Have Yourself a Merry Little Christmas — before (spoilers!) everything turns out alright in the end. It’s all perfectly pleasant, but I’m not sure I could offer it any higher praise than that.