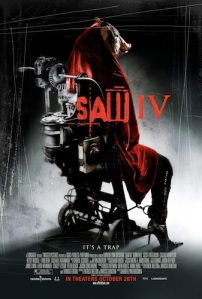 Saw IV is the final film in the series directed by Bousman, and will also be my jumping off point (for the time being). According to IMDb (which I presume is sourced from a commentary or something), Bousman had been intending to depart after Saw III, but was persuaded to stay when a twist in the fourth film’s script managed to surprise him, something he thought the franchise was by then incapable of. But do not let this get your hopes up, dear reader, because Saw IV lacks any twists that even come close to those in the preceding films. What caused Bousman to continue is a mystery, and some viewers will inevitably feel the same way about continuing with the series themselves.

After the overly gory third film, Saw IV returns to the franchise’s roots by playing more like a thriller than a horror film — even more so than the previous instalments, one might argue, as aside from a couple of jumps and a few instances of gore, the story and its key sequences move forward via police investigation, endless flashbacks and copious twists. The Saw franchise should be applauded for trying to be more than just another slasher series, but needs to learn the value of restraint in other areas.

The plot, for example, is incredibly complicated. This could be a good thing — it’s rare for the fourth film in a franchise, especially a horror one, to demand so much from its audience — and the viewer not only has to pay attention to the events on screen, but have a pretty good awareness of those from the last two films as well. Despite its complications, such connectedness is actually a reason to retain hope for the franchise, because it really tries to be about more than just how graphically it can slaughter people.

Unfortunately, any effort on the part of the viewer isn’t rewarded. Saw IV is too complex, ultimately descending into the realms of incomprehensibility. There are around four different plot threads, at least two of them jumping around in time like a TARDIS with ADD. Goodness knows how many different time zones are included, how many of them progress in a linear fashion, and whether or not they actually have any bearing on each other. Even references to previous films are confused: while this clearly begins some time after the end of Saw III, it then jumps back before Saw III, and then during Saw III, and then with Saw III, and then after Saw III again… but not as far after it as that opening scene. And that’s just the main plot.

A lot of the complexity is in aid of answering hanging questions from Saw II and, especially, III, but the mass of backstory leaves you wishing for a standalone ‘Test of the Film’ plot, which the first three essentially are. As already expressed, such an intricate array of stories is not necessarily a problem, but neither new writers Patrick Melton and Marcus Dunstan nor director Bousman have the required skill to guide the audience through such dense material. Nor the experience to know when less can be more, clearly.

Fortunately, Bousman seems to have learnt that “less is more” with the deaths. After the excess of Saw III, the gore feels pared back here. The one notable exception is an entirely extraneous autopsy that opens the film, which goes beyond the last entry’s brain surgery in the gruesome stakes. Apparently it’s to prove Jigsaw is unquestionably dead, but it does it with more glee and explicit medical detail than necessary.

Elsewhere, however, the savagery shortage is welcome — except that, in the process, Bousman seems to have misplaced the tension present in the first two films. The only real suspense is an opening trap that is, again, almost entirely extraneous to the rest of the plot, although one trap later on — featuring an abusive husband pinned to his wife — is moderately ingenious, achieving Jigsaw’s proclaimed ideas of apt justice in ways many previous traps failed to.

And what of Jigsaw this time? He may be dead, but instead we’re treated to flashbacks of John Kramer’s pre-Jigsaw life. As you may remember from my complaints in Saw III, revealing more about our villain is, in this case, not a good idea. Seeing Kramer before he was an Evil Bad Guy is clearly an attempt to make him a real person, one inspired to engage in a killing spree by every-day, real-life events. As with the other thriller elements, grounding the villain in the real world — and trying to give him plausible, relatable motivation — sets the Saw series apart from the vast majority of other horror franchises. But there’s no need to understand Jigsaw, and the more we learn about him the less impact he has. His soul is laid bare here, but by trying to make his actions plausible it continues to strip away the mystery and highlights how ludicrous his traps are in reality — they work fine in the conceit of a horror movie, but trying to imply it’s a real person doing these in the real world is one suspension of disbelief too far.

Which kind of sums up the film, really. Saw III went too far with its gore, and now Saw IV goes too far with its plot. As the series rattles on to its fifth instalment (and this year’s sixth, and next year’s seventh, and at least an eighth beyond that), its only hope for regaining a decent level of quality — in my opinion, of course — is to keep the gore at a manageable level, and keep the storytelling at one too.

Technically I watched the Unrated/Extreme extended cut of Saw IV. The differences are numerous but ultimately minimal. Those desiring a full list of alterations can find one here.