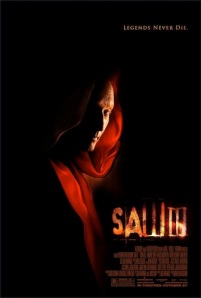 I’m reliably informed that, in the UK, we do our best not to allow people with psychopathic tendencies into the armed forces. In the US, on the other hand, they let them all in. And they also let them make movies like this.

Along with it, the gore feels less justified. The traps have an element of invention about them, but the punishment doesn’t fit the crime in the same way it did in the first two films. There is arguably an explanation for this (to share it would be to spoil some of the plot), but that seems a thin excuse for a lack of intelligence on the part of the writers. In fact, one of the most gratuitously gory scenes is a brain surgery sequence that’s almost entirely unrelated to anyone’s test. It’s shown in unrelenting, unnecessary detail, coming across as the makers using some kind of “but it’s a medical procedure” excuse for showing more grisly detail than they might otherwise be allowed.

The story that links the monstrous set pieces together is a bit of a mixed bag, continuing dangling threads from the previous films while producing a few of its own that seem unconnected. It lacks the focus and straightforward drive of the first two instalments, but leaves the viewer longing for such a thing. The main test, once it gets underway, is quite a good idea, and different again to its predecessors. Here we have one man facing those he holds responsible for the death of his son, and it’s up to him whether they survive their traps. The traps may not be as clever as before, but the storyline is different enough to engage the audience’s interest.

But before the worthwhile bit can begin, we have a section that just feels like housekeeping — where Detective Matthews has got to, what happened next to Detective Kerry, what Amanda is up to now. Worse, woven around the main test is another story thread — one that finds Jigsaw on his deathbed (perhaps) and deems it necessary to fill us in on Amanda’s backstory. Unfortunately, this latter part is incredibly dull. That the film’s final moments reveal it was more relevant than previously expected does invite a re-watch, but the prospect of sitting through the sadistic mutilation — and nonetheless boring expository scenes — for a second time is just as off-putting.

Not only is the Jigsaw subplot dull, it’s also too revealing. One of the many things that marks Saw out from its horror stablemates is that Jigsaw is a real man, not a supernaturally-powered being, but he still works best as an enigmatic figure, menacing characters in occasional scenes that offer no more than a handful of tidbits about his past. Here, he’s both over-central and over-revealed. The more we learn the more his mystery is removed, he becomes less interesting and, worse, less threatening. Tobin Bell’s performance is as good as ever, but the character works better in fewer, more condensed doses.

As well as endless backstory, the screenplay also offers another final array of twists. The closing revelations were some of the best bits of the last two films, so are naturally loaded with expectation here. Personally, I didn’t find them to be much of a surprise, most of it guessable from too far in advance. Rather, the final round of frame-long flashbacks are desperate to make the viewer think it’s more of a twist than it is, kind of like the filmmakers explaining why something’s so clever in spite of it being a bit obvious. To be fair, these ‘twists’ aren’t stupid — in fact, they’re quite good — but I wasn’t surprised by them. As if Bousman and co were trying to redeem themselves, the scene that follows is quite tense, and one very final twist — just when you thought they were all twisted out — does manage to surprise. And it’s a cliffhanger to boot.

Indeed, despite a certain finality at the end, Saw III is ready-made for at least one further sequel (of course, as we now know, it’s got four and counting). There are all kinds of little bits that go unexplained here, from characters to blink-and-you’ll-miss-them plot-points-in-waiting, not to mention that it ends on that fairly substantial cliffhanger-twist. That it’s so brazen in its lack of comprehensive answers will irritate some, while others will delight in the knowledge there are still more mysteries to ponder.

Visually, Saw III is overcooked. The cinematography is too stylised, heavily filtered to offer a single-colour-saturated look for each location. Such a technique can be beneficial in certain contexts — Traffic, for example, lucratively uses an even more extreme example — but here feels like someone was let loose in the grading toolbox. Equally, the trickery with scene transitions — where different locations have been built on the same set so as to move between them without any editing or digital effects* — may have looked clever in 1940, but now seems needless. Worse, it confuses the storytelling and the audience’s sense of geography. It’s one thing tricking your viewer with plot twists, another entirely to needlessly mislead their understanding of filmic space. These wannabe-flashy transitions are inspired by similar ones in the preceding films, but there they were neatly subtle and surprisingly effective, while here they don’t look as cool as someone clearly thinks, as well as initiating moments of befuddlement.

Despite my ever-growing catalogue of complaints, there is a bright side for Saw III. What could have been just another rehash of the same basic plot conceit ramped up a bit more — from two people trapped in a room, to half a dozen trapped in a house, this could’ve just been a dozen trapped in an office block — instead chooses to come up with a new narrative structure. Yes, it’s still based around defeating a series of traps/tests, but in a genre where some franchise entries are merely distinguished by the different modes of death — if that — it’s tantamount to a revelatory change of style. It also holds the distinction of being the only Saw film so far I want to rewatch to better consider events (and, from a filmmaking standpoint, its narrative structure and balance), even if other elements put me off.

Though it’s Jigsaw’s story that merits this feeling, I’d still rather have less of him and more of the test he’s got on the go. Sadly, I think the franchise is headed in the exact opposite direction.

* This technique was definitely used in Saw IV (according to IMDb), but I don’t know if it was also applied here or if it just looks like it was.