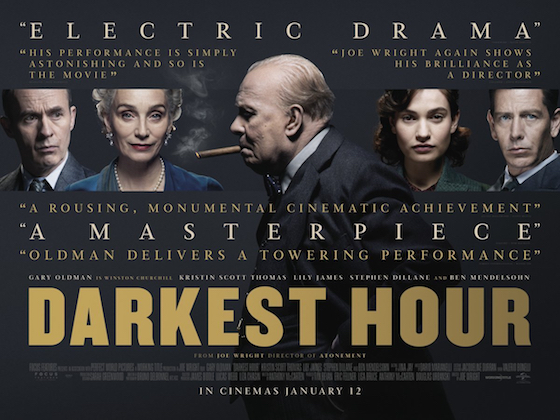 2017 was, for no readily apparent reason, a banner year for stories about Dunkirk making it to the big screen. In April there was Their Finest, a film about people making a film about Dunkirk (how apt). In July there was Dunkirk, Christopher Nolan’s high-profile telling of the evacuation itself. Finally, in January 2018 (because, when it comes to films, January and February are part of the previous year in the UK) there was this, the story of Winston Churchill becoming Prime Minister of the UK in May 1940 and immediately having to deal with the situation in Dunkirk, alongside calls from within his own government to negotiate peace with Hitler — something Churchill was not inclined to do, despite the odds of winning the war not being in Britain’s favour.

The Dunkirk connection was certainly played up in the film’s marketing (the trailers made it look like Dunkirk 2), but while that situation does have a significant role to play (and both films climax with a recital of the same uber-famous speech), it’s only part of what this film’s actually about. Which does actually make it quite a neat companion piece to Nolan’s movie: it expands on the political backdrop surrounding Dunkirk, placing those events in a wider context. In doing that, it presents a different perspective on familiar events. Churchill is widely remembered as a great and beloved leader who saw us through the war, but here his own party treat him as something of a lame duck Prime Minister, and spend most of their time trying to convince him to take a different course of action.

In this respect, Darkest Hour seems dead set on removing the rose-tinted memory of World War 2 which says that “of course we stood up to those evil Nazis”. The film reminds us, and reminds us hard, that there were many people in positions of power who thought the best course was to acquiesce to Hitler — to give in and seek peace with him — and that, in many ways, their opinion was not irrational. Certainly, the film makes the case that it was the safer route in order to both secure the lives of our troops and hold off invasion of our shores. It’s relatively mature to both not hide from that reality and present the arguments as at least somewhat reasonable.

That said, the film fails to maintain the veneer of unvarnished historical reality for its entire running time. In the third act, Churchill boards a train and encounters members of the public in a sequence that is shamelessly, manipulatively, almost tweely patriotic and sentimental… and yet I kinda got suckered in by it anyway. I think that’s got something to do with these dark days we live in — wouldn’t it be nice to believe The General Public would want to stand up for what’s right in the face of overwhelming odds? Whether it’s historically accurate (maybe everyone was just better back then?) or whether it’s a nostalgic view of what people were prepared to stand for, I don’t know; but either way, it’s effectively aspirational.

A film like this is powered by it performances, and obviously Gary Oldman — subsumed in makeup to turn his slender frame into the famously rotund Churchill — is the stand-out. He thoroughly disappears into the role. Obviously the prosthetics help a good deal with that, but it’s also the voice, the gait, the mannerisms. Naturally he dominates the film, but there’s still some space for quality turns in the supporting roles. In particular, Stephen Dillane as the film’s de facto villain, Halifax, gives a performance that, in its own way, is just as mannered as Oldman’s (the lisping voice), but also just as subtly believable and well measured. Pretty much the same thing could be said about Ben Mendelsohn as King Colin Firth George VI.

But then there are other roles that are less well served. The women, mainly. Lily James’ secretary seems to be present merely to give a significant role to a female character, and to try to humanise Churchill by charting a very familiar “he’s tough to work with at first, but he’s got a heart of gold and is just super once you get to know him” arc. Similarly, Kristin Scott Thomas very nearly has an interesting part as Churchill’s wife, his long-time partner who’s been consistently overlooked in favour of his dedication to the public, but that’s an underdeveloped thread.

So, Darkest Hour is a strong movie in many ways — the male performances; Joe Wright’s classy direction; the way it manages to be simultaneously a more-realistic-than-most depiction of the “maybe we should surrender” debates in the early days of the war and a patriotic “we shall never surrender” entertainment — but it’s also let down by some of those lapses into cliché and sentiment. How susceptible you are to the almost-propagandist “this was our finest hour in the face of terrible odds, both at home and abroad” narrative may dictate how much you like the end result. For me, the aforementioned successes outweigh the faults on balance, but there’s no denying there are problems.

Darkest Hour is available on Sky Cinema from today. 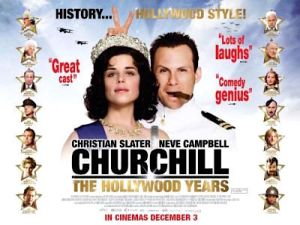 What if the Americans made a movie of Winston Churchill’s life, prone as they are to re-write World War 2 history to show they won it all by themselves?

This is ostensibly the premise of this spoof from some of the team behind Channel 4’s The Comic Strip. I say ostensibly, because the film is bookended (for padding, I suspect) with scenes that suggest that the real Churchill was an American GI, and the British simply re-wrote history using a somewhat chubby actor called Roy Bubbles. Sadly, the joke was funnier when it was riffing on those US historical re-writes.

The problem with killing that joke is, it’s the best one the film’s got. It’s also just about suitable for a five-minute comedy sketch, or, at a stretch, a series of sketches. The strategy for drawing this out to movie-length seems to have involved those bookends, as well as bunging some outtakes at the end and including a bunch of ridiculous, irritating, and unfunny subplots with Hitler and his entourage. It’s a shame to see the talents of actors such as Antony Sher and Miranda Richardson frittered away on such material.

This is all being a tad harsh, because Churchill actually has its fair share of amusing moments. The supporting cast of British TV comedians are mostly very good, Neve Campbell’s posh English accent (usually such a stumbling block for Americans-as-Brits) is as good as anything a British actress could have delivered, and Christian Slater and Romany Malco make for a likeable pairing. But, again, most of the best bits are of sketch length, and so wind up spread out among the padding.

In that respect it’s quite a shame, because there’s a good idea, good potential, and some good laughs in here.