A squire fakes being a knight to win a jousting contest, and a lady’s affection, in this medieval comedy-adventure.

Renowned for its anachronistic use of rock music, there’s actually not much of that, but there’s plenty of comedy and adventure — too much: it’s a little long (that there’s an extended DVD beggars belief). An able cast keep it ticking: Heath Ledger hefts the derring-do and romance, with comic support from Mark Addy, Alan Tudyk, and Paul Bettany; but love interest Shannyn Sossamon is clearly miscast.

Though a favourite to some, I wouldn’t say it’s under-appreciated, but it’s a fun romp. 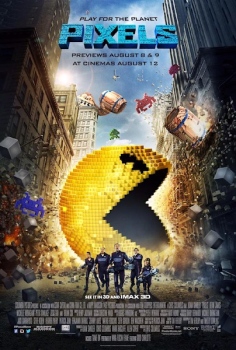 Adam Sandler, eh? He has his fans, though apparently not among people who can write because you rarely see a good word penned about him. The one exception is Punch Drunk Love, and that’s because it’s a Paul Thomas Anderson film, and that’s why it’s the only Adam Sandler film I can remember seeing. I didn’t like it.

So why did I watch Pixels, which was as poorly received as Sandler films always are? Good question. It had a good deal to do with the short being good (I reviewed it back in 2010), and being intrigued how that concept — which makes a neat three-minute visual idea but doesn’t have any plausible narrative potential — could be converted into a full-length feature. Of course, a daft idea for a film, plus Adam Sandler, plus bad reviews — plus weak trailers — doesn’t add up to a recipe for success. To my surprise, then, I largely enjoyed it.

The plot sees aliens intercept signals from classic arcade games and believe they are a declaration of war, and so attack Earth in the form of said games made real. The best person to stop them is cable guy Adam Sandler, who used to be a video game wunderkind, and is fit for the job mainly because the President of the United States is his best mate — that would be Kevin James, as the unlikeliest US President in history. They also rope in Sandler’s old gaming rival, Peter Dinklage, and are chaperoned by Michelle Monaghan’s Lieutenant Colonel, who doubles up as a love interest for Sandler (of course). Later, Sean Bean and Brian Cox slum it in inexplicably small roles. 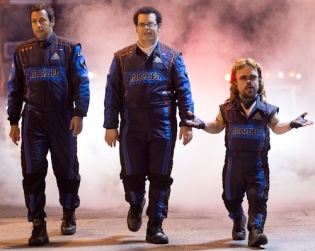 Pixels is the virtual definition of brain-off entertainment. The story has the plausibility of a kids’ daydream, the humour is frequently unimaginative, and the action sequences mostly coast on their basic concept rather than trying to elevate them. And Peter Dinklage is going to get a reputation for having terrible taste. I mean, I liked Knights of Badassdom, but hardly anyone else did, and now this… “Stick to TV, Peter Dinklage,” people are going to say. Assuming they’re not already.

But for all that mediocrity, I spent 100 minutes feeling gently entertained. I laughed a few times; the action was, as I say, passable; and there’s a bit in the Donkey Kong-themed climax with a remix of We Will Rock You that I rather liked. I don’t imagine I’d ever look to watch it again, but for a completely undemanding time-filler, well… (Nothing like damning with faint praise, eh?)