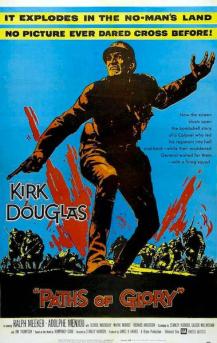 “The paths of glory lead but to the grave,” wrote Thomas Gray, and Stanley Kubrick — adapting from the novel by Humphrey Cobb — sets about proving him right.

Kubrick’s depiction of war is excellent, from long tracking shots through the trenches, to the nighttime wilderness of No Man’s Land, lit only by flares that reveal it’s strewn with bodies, to an epic and perfectly-staged battle that is a visual and aural assault. Indeed, Winston Churchill claimed that the film was a highly accurate depiction of trench warfare and the sometimes misguided workings of the military mind, and it’s so effective that it was banned in France for its negative depiction of the military. I’m sure the story could have been equally well applied to any military in the habit of killing its own men, but hey, it’s always fun to pick on the cheese-eating surrender monkeys.

Even beyond the battle scenes the film remains bleakly realistic: the depressing Old Boys’ Club-style hierarchy of the military (still all too much in effect, as series like Generation Kill reveal); the unjust unrecorded trial (an excellent courtroom sequence that can stand up to any other); through to the inescapable finale. George Macready’s villain is as chillingly evil as they come, because he’s so believable. Lying, manipulating, selfish and dishonourable, yet he produces all this from an opening scene where he appears to be a perfectly honourable General (though one has one’s suspicions). Even at the very end, when some small measure of genuine justice has been wrung from the whole sorry mess, one of the few remaining almost-likeable characters is fully unmasked as just as bad as the rest. Kubrick tries to instil some hope with his final scene, but by then he’s done too fine a job of wiping it out.

There’s a debate, it seems, about whether this can accurately be described as an anti-war film. It’s patently not pro-war, with its ineffective officers, self-serving high command, corrupt legal system and senseless slaughter for absolutely no military gain; but the argument that it is less a commentary on war and more on human nature — how people, not just soldiers, respond to the opportunity for glory, and how they attempt to cover their own tracks when it goes wrong — certainly holds some weight. The final scene, which is in almost every other respect entirely unrelated to the main narrative, supports such a theory, as does the source of the title. But just because that’s true doesn’t mean it’s not anti-war as well; or, at the very least, anti-military (if that’s not the same thing).

Perhaps reaction to the film depends on your ideological stance. I’m all too prepared to believe the military is corrupt and unjust because, well, that’s how they always seem. As such, Paths of Glory does an outstanding job of fulfilling and reinforcing these preconceptions, particularly in its refusal to end justly. If you have some measure of faith in the forces, however, you may think it’s an unjustified attack on your beloved institution. Each to their own.