Didn’t get Toy Story 3 for Christmas? Pick it up in the sales, then, because it’s bloody good.

Much was written about Toy Story 3 when it was released this summer, so I’m not sure how much I have to add, but here we go. It’s no surprise either — that’s what happens when a preeminent and popular studio releases a sequel to a beloved and acclaimed film franchise 11 years after the last instalment. High expectations abounded. For once, they weren’t necessarily unrealistic: if anyone could pull off such a feat, it’s Pixar.

It was somewhat amazing when Toy Story 2 equalled — some (including me) would say bettered — the first film. We may be more used to quality sequels these days but, as major franchises like The Matrix and Pirates of the Caribbean readily prove, they’re still far from guaranteed. To even try again with a threequel seems madness (no one’s told Chris Nolan this either, it seems). But they tried, and they succeeded: Toy Story 3 is at least the equal of the first two, if not once again slightly better — something that is, as far as my memory can muster, unheard of.

Individual adjectives serve admirably: it’s hilarious, emotional, exciting, scary; a great comedy, a great action/adventure. And Ken’s fashion show sequence is worth the price of admission all by itself. It’s kid-friendly, of course, but it’s not just for kids — it’s for young adults,

who’ve grown up with these films and these characters and, in a way, are letting them go along with Andy; and for adults, who may have left childish things behind but can hopefully still appreciate the thematic sentiment.

Darker sequences support this interpretation, I think — the furnace climax, for instance, which carries a palpable sense, even to a savvy adult viewer, of “will they really do that?” doom. With the intention being that this is the series’ closing instalment — and with Andy grown up and leaving so that, however things end for the toys, this is The End for viewers — there are times when one wonders just how dark Pixar may be willing to push it. The potential that some or all of the toys may be lost along the way is a genuine fear, a move of blue-moon rarity for modern Children’s Films. This is in addition to the usual Pixar style of including jokes and references to skim over the kids’ heads.

I suppose TS3 may not be quite as effective if the first two films weren’t part of your childhood. I feel they were on the edge of mine — I was certainly too old to actually have any of the toys, for instance; I imagine anyone who had their own Buzz or Woody will feel 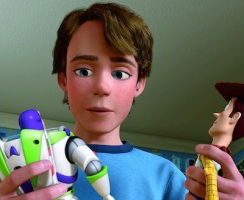 even more emotional seeing them go through what they do here. Similarly, it pays to be aware of events and jokes in the preceding films. You don’t need to know intricate plot details, but there are plenty of pleasing references to catchphrases and moments.

Is Toy Story 3 faultless? Probably not. But I can’t think of any right now. Sublime.

Toy Story 3 placed 2nd on my list of The Ten Best Films I Saw For the First Time in 2010, which can be read in full here.