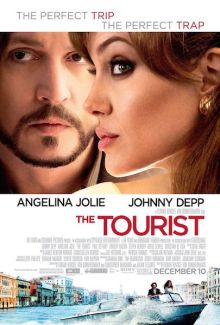 Much maligned on its release, I thought The Tourist was actually a decently entertaining light thriller.

Some of the criticisms are valid: stars Johnny Depp and Angelina Jolie do lack chemistry, there are some plot holes and logic leaps, and the tone is muddled (is it a thriller? A romance? A comedy? All of the above but with the wrong balance?)

However, other parts are good fun, and there are solid, entertaining twists to be found in the plot. It may not be a great movie, but taken as a light amusement, it’s not as bad as its reputation suggests.

In the interests of completing my ever-growing backlog, I decided to post ‘drabble reviews’ of some films. For those unfamiliar with the concept, a drabble is a complete piece of writing exactly 100 words long. You’ve just read one.