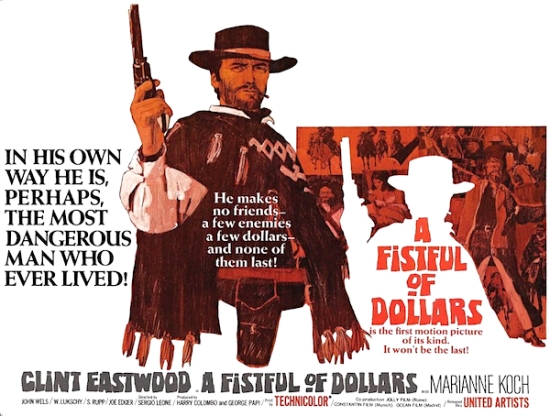 In his own way he is, perhaps, the most dangerous man who ever lived!

Director
Sergio Leone (The Colossus of Rhodes, The Good, the Bad and the Ugly)

Dialogue by
Mark Lowell (High School Hellcats, His and Hers)

Story by
Adriano Bolzoni (Requiescant, Your Vice is a Locked Room and Only I Have the Key)
Víctor Andrés Catena (Sandokan the Great, Cabo Blanco)
Sergio Leone (Duel of the Titans, Once Upon a Time in America)

Based on
Yojimbo, a Japanese samurai film written by Akira Kurosawa & Ryûzô Kikushima and directed by Kurosawa. (Not officially, but the makers of Yojimbo sued and it was settled out of court — presumably because it’s really, really obviously a remake of Yojimbo.)

The Story
The Mexican border town of San Miguel is ruled over by two rival gangs. When a gunslinging stranger arrives, he attempts to play the two gangs off against each other to his benefit.

Our Hero
The Man With No Name, aka Joe, seems to just be a drifter, who rocks up in San Miguel and sees an opportunity to make some money by doing what he does best: killing people.

Our Villains
Neither of the two gangs — the Baxters and the Rojos — are squeaky clean, but the Rojos are definitely the nastier lot. Led by three brothers, the cleverest and most vicious of them is Ramón, who’ll stop at nothing to punish Joe after he threatens their empire.

Best Supporting Character
The innkeeper Silvanito, who warns Joe away when he first arrives, but becomes his friend and almost sidekick later on.

Memorable Quote
“When a man with .45 meets a man with a rifle, you said, the man with a pistol’s a dead man. Let’s see if that’s true.” — Joe

Memorable Scene
As Joe heads off to confront three of Baxter’s men who shot at him earlier, he passes the coffin maker — and tells him to get three coffins ready. Coming face to face with four of Baxter’s goons, Joe asks them to apologise to his mule. They, naturally, refuse… so he shoots them all dead. As he walks back past the coffin maker, he casually apologises: “My mistake — four coffins.”

Memorable Music
Ennio Morricone’s score is as much a defining element of this movie as the visuals or the cast. His later theme for The Good, the Bad and the Ugly may be his best-known work, but there’s a cracking main title theme here too.

Letting the Side Down
It’s just a fact of this kind of production from this era, but the English dubbing is really quite terrible. Well, the acting’s not all that bad, as it goes, but the lip sync is not very synced.

Making of
When it premiered on US TV in 1977, the network found the film’s content morally objectionable: the hero kills loads of people, apparently only for money, and receives no punishment. While that might sound perfectly attuned to US morals today, they had different ideals back then. So they ordered a prologue be shot, showing Eastwood’s character receiving a commission from the government to go sort out the town of San Miguel by any means necessary — thus morally justifying all his later killing, apparently. The short sequence was directed by Monte Hellman (Two-Lane Blacktop) and starred Harry Dean Stanton (RIP).

Next time…
The loosely connected Dollars (aka Man With No Name) Trilogy continued with For a Few Dollars More (which was part of my 100 Favourites last year) and concluded with The Good, the Bad and the Ugly (which someday will get the “What Do You Mean You Didn’t Like” treatment).

The Dollars trilogy were among the first Westerns I saw, and I’ve been meaning to revisit them for many years. I was finally spurred on to start by watching Yojimbo for the first time. Watching that and this back to back, you can’t miss how similar they are — no wonder they settled the legal case, they wouldn’t’ve had a leg to stand on. Yojimbo is the classier handling of the material, giving the whole scenario a weightiness that has gone astray here. Fistful has its own charms, of course, as director Sergio Leone merrily reinvents the Western genre before our eyes — out go the simple white hat / black hat moral codes, in comes baser motivations (greed, lust) and quick sharpshooting. What it lacks in classiness or weight, it makes up with coolness and style.