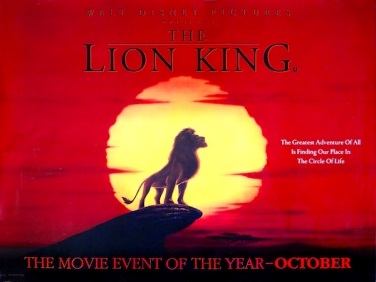 The greatest adventure of all is
finding our place in the circle of life.

Sort of based on
Hamlet, a play by William Shakespeare.

The Story
The savannahs of Africa are ruled by the lion Mufasa, a kindly king who is struggling to instil some sense of life’s importance in his reckless young son and heir, Simba. But Mufasa’s brother, Scar, lusts for power, and manipulates Mufasa and Simba to gain it…

Our Hero
Lion cub Simba is heir to his father’s throne as ruler of the Pride Lands, and a naughty, unruly prince who just can’t wait to be king. All that changes when he winds up outcast, and has to learn to grow up before returning to save his kingdom.

Our Villain
King Mufasa’s jealous brother, Scar, who also just can’t wait to be king. Obviously that’s not going to happen under the regular rules of succession, but Scar is a cunning and conniving sort. Well, he is the villain.

Best Supporting Characters
After running away, Simba falls in with meerkat Timon (voiced by Nathan Lane) and warthog Pumbaa (voiced by Ernie Sabella), who have a laid-back attitude to life, and raise the lion cub to have the same. So successful they had their own spin-off series and were the stars of a sequel, too.

Memorable Quote
Mufasa: “Everything you see exists together in a delicate balance. As king, you need to understand that balance and respect all the creatures, from the crawling ant to the leaping antelope.”
Simba: “But, Dad, don’t we eat the antelope?”
Mufasa: “Yes, Simba, but let me explain. When we die, our bodies become the grass, and the antelope eat the grass, and so we are all connected in the great circle of life.”

Quote Most Likely To Be Used in Everyday Conversation
“Hakuna matata” — a wonderful phrase, it means no worries for the rest of your days.

Memorable Scene
The opening sequence, in which all the animals gather to celebrate the birth of Simba, scored to Circle of Life, is a majestic sequence — so impressive, in fact, that Disney used it, uncut and unadorned, as the film’s trailer.

Best Song
Big romantic number Can You Feel the Love Tonight won the Oscar, and there were nominations for epic opener Circle of Life and quotable comedy hit Hakuna Matata, and you shouldn’t overlook the fun and impressive choreography of I Just Can’t Wait to Be King, but for me the best number is Scar’s Be Prepared. I do love a good villain’s song.

Technical Wizardry
The Lion King continues Disney’s integration of CGI into their animated features, this time using it to create the pivotal wildebeest stampede. A new program had to be written for the sequence, which allowed hundreds of computer generated animals to run without colliding into each other. It took the CG department three years to animate the scene.

Making of
Voice actor Frank Welker (who has over 760 credits to his name on IMDb, including originating Fred in Scooby-Doo and voicing Megatron in the Transformers animated series) provided all of the film’s lion roars. No recordings of actual lions were used.

Next time…
As one of the biggest successes of the Disney Renaissance, The Lion King has naturally had more than its share of follow-ups. The headline has to be the stage musical adaptation of the film, which opened in 1997. It’s the third longest-running show in Broadway history, and is “the highest-earning entertainment property in history in any medium”. In 1998, direct-to-video sequel The Lion King II: Simba’s Pride was released. Apparently its plot is influenced by Romeo and Juliet. A second direct-to-DVD sequel, The Lion King 1½ (known as The Lion King 3 in some countries, including the UK), was released in 2004. It’s based on Rosencrantz and Guildenstern are Dead, re-telling the first movie from Timon and Pumbaa’s perspective. I watched it years ago and really enjoyed it, an opinion supported by its strong 76% on Rotten Tomatoes. On television, spin-off series The Lion King’s Timon & Pumbaa ran for three seasons from 1995, and just last year TV ‘movie’ (it’s only 45 minutes) The Lion Guard: Return of the Roar heralded the start of a new series, The Lion Guard. It’s been renewed for a second season.

What the Critics Said
“Even the inescapable hype cannot diminish the fact that this is one great film. Consider that this movie delivers strong characters, a sophisticated story, good music, captivating visuals and loads of emotion — all within the confines of a G-rated cartoon. […] The most exhilarating part of The Lion King is that it’s not just great animation, but superior filmmaking. Outstanding character animation is a given at Disney, which handles the nuances of movement better than anyone. But the last few animated features show an increasing mastery of cinematography techniques. In The Lion King, the eye of the camera ranges from point of view to overhead to moving with the scene. The opening sequence where the plains animals trek to see the newborn cub and the wildebeest stampede scene are breathtaking.” — Bill Wedo, Philadelphia Daily News

What the Public Say
“Timone and Pumba [sic] are two of the more interesting comic relief characters in Disney films. I’d argue that they’re one of the most wonderful depictions of a same-sex parenting couple that I have ever seen. I don’t want to get drawn into a debate over their sexuality, but the pair are partners in the truest sense of the word, sharing a life. They sleep together, for crying out loud. I don’t care about their sexuality or anything like that, because we’ll never get an answer on that and it’s immaterial. All that matters is that they complete one another, and it’s sweet. […] Even when Simba arrives, it’s very clear that the dynamic is different – Simba isn’t an equal partner in the relationship like Timone and Pumba. They’re a family, but Timone and Pumba are more of a couple.” — Darren Mooney, the m0vie blog

My third Disney pick is consecutive to my previous two (Aladdin and Beauty and the Beast) in Disney’s history of animated classics, which goes to show how successful their ’90s Renaissance was. (Also, when my childhood was.) The Lion King succeeds by combining a selection of memorable, hummable songs with an epic tale of royal politicking — but, y’know, in a Disney way. Unafraid to include plot twists that place it alongside Bambi in the company’s canon, but with some well-performed comedy characters to lighten the mood, it manages to be one of Disney’s most entertaining but also most philosophical (in its way) films.

Jackie Chan and Jet Li co-star for the first time (with shared billing, thanks to the J — on screen as it is on the poster) in this US-produced martial arts epic.

Despite slick modern filming and CGI, it all feels kinda ’80s — not that that’s necessarily a bad thing. But there’s something about the setup — which sees teen Michael Angarano find a magic staff in a Chinatown shop and escape a group of thugs by accidentally transporting back to Ancient China, just in time for a Quest — that rings of ’80s US kids/teenage movies to me, though I’m not exactly sure which ones.

Anyway, it’s once he’s in the past that the fun begins. The staff belongs to the immortal Monkey King, imprisoned as a statue by some nastier fellow immortals, and it’s up to our teenage hero and his newly-found companions to return it. Cue trekking across countryside and fighting lots of enemies. It’s a straightforward and well-trodden story, but it’s serviceable enough to link up the action sequences. Those are well-handled by director Rob Minkoff, which you might not expect from a man whose previous experience was mostly limited to The Lion King and Stuart Little.

The big one everyone wants to see, of course, is Chan vs. Li. Rather than engineer it to form part of the climax, they duel halfway through, in an encounter that settles on a victor just as much as that opening credit does. Nonetheless, it’s an epic bout in terms of both scope and length. It’s clearly been lavished with the appropriate attention, and focuses on the pair’s physical skills rather than being cobbled together with editing or brushed over with lashings of CGI.

We do get the latter during the climax, which is fine; the former never rears its ugly head. Minkoff knows to hold his camera back, eschewing the fast-cut close-up style of most modern Hollywood action for a more traditional use of long shots and longer takes. It’s a natural fit for the extensive, impressive choreography that’s performed by expert professionals.

Received wisdom seems to be that The Forbidden Kingdom is not very good, but I really enjoyed it. It’s undeniably hokey in places, but no more so than your average genuine martial arts flick (this being a “semi-genuine” affair, with its Hollywood lead actor, writer and director, and primarily English dialogue). Best of all, the fight scenes are uniformly great — the highlight may be midway, but the others didn’t disappoint. Not the best work that either Li or Chan has appeared in, I suppose, but an entertaining martial arts flick all the same.