A Czech noir animation, set around Christmas 1989 to the backdrop of the country’s Velvet Revolution. Eponymous character Alois Nebel is a train station guard whose flashbacks to an event at the end of World War 2 see him sectioned, though possibly for other nefarious purposes. Having lost his job, he travels to head office in Prague to try to reclaim it, where he meets a ragtag gang of social misfits. Finally returning home, the mystery of what happened 44 years earlier may be resolved…

If that covers most of the film, it’s because Alois Nebel seems to very much occur in three distinct sequences, most probably the legacy of being adapted from a three-volume graphic novel. They’re linked by the mystery of what happened in World War 2… sort of. I mean, there is a mystery, but what that mystery is isn’t fully elucidated, it goes AWOL during the middle segment of the film, and it remains pretty easy to guess the outcome. Plus, the titular character seems entirely incidental to it — he only witnesses something in the past, and then is accidentally, unknowingly involved in its resolution four decades later. Perhaps that’s part of the point…

Although the events of the past may find a resolution, the film leaves us with many questions. How and why do Nebel’s colleagues get him locked up in the mental hospital? Ok, there’s an element of corruption in the ‘how’ — but how did they know about his flashbacks? And the ‘why’ is certainly never made clear. Then, what is all the Prague stuff about? It seems a complete aside in the middle of the narrative. Is it a “state of the nation at that time” piece, maybe? There’s a revolution playing out in the background afterall, but it’s very much an aside.

Perhaps the whole film is Deeply Thematic, then? It may be to do with the country moving on and making peace with its past, seen in a microcosm in the actions of Nebel (moving past the flashbacks, having new experiences, finding love, etc) and the people around him (finally getting revenge for something that happened nearly half a century ago). Maybe that’s all more clear if you know the Czech mindset, or the history of the Velvet Revolution. The second post in this thread on IMDb gives an idea of some of the stuff you need to know, and how some of the nuance is lost in English — for instance, there are actually multiple languages spoken in the film*, but it all comes out as English in the subtitles.

On the bright side, the language of visuals is universal, and some of the animation here is quite stunning. There are shots and camera moves you don’t typically see in 2D animation, and a greater variety of them too, presumably because it’s all been rotoscoped, so it’s all based on real-life filmed stuff rather than the one painted background someone did, etc. There’s always something moving in shot, too — trees blowing, rain streaming, snow drifting in… The landscape shots featuring that kind of thing are more beautiful than the character animation. The latter is always the oddest part of rotoscoping. Here, it sometimes lends a hyper-realistic style, with all the little shifts and tics you get from real people that you don’t from purely animated ones. The downside to that is you sometimes get a bit of an uncanny-valley effect, or parts of the body changing shape or floating around for no apparent reason. 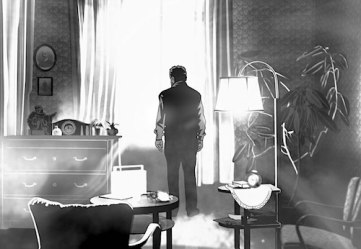 With some attractive black-and-white animation and a sporadically engaging mystery plot, Alois Nebel is far from meritless. However, its firm grounding in a wide spread of Czech history and attitudes suggests it may be best suited to those already well-versed in that country’s history and culture.

* I realise I’ve put Czech as the only language at the top. That’s what IMDb and Wikipedia say and I’ve not found anything that verifies exactly what else is spoken. ^

I’m a bit behind on the MCU, but skipping a couple of movies & several TV series to finally see what all the fuss was about with this’un.
Finally! 🥳
We think of the line blurring between TV and film as a recent thing, but back in the ‘70s they were re-editing episodes of The Persuaders for theatrical release… and now they’re on Blu-ray, thanks to @networkonair 😁
My collection of Bond novels inches closer to completion…