Mumble and his penguin pals return for another adventure, in a series the Australian film industry are reportedly inordinately proud of.

Not as fun as the first, Happy Feet Two suffers from messy storytelling that can’t seem to settle on a narrative thread. For example: a massive subplot featuring a pair of Pythonesque philosophical krill, voiced by Matt Damon and Brad Pitt, is the film’s most fun element, but never significantly connects to anything else.

At least there are a few good musical sequences, one again re-appropriated from existing pop tunes, not least an Australian-accented elephant seal rendition of Rawhide.

One of the most surprising hits at the box office in 2005, as you’re probably aware this is a documentary about penguins. Specifically, it’s about their mating cycle — there’s little information outside of that. It does manage to touch on the sex, death and violence inherent in most nature things though, albeit in a family-friendly U-rated kind of way.

In fact, it’s a film very much about the story of the mating cycle, rather than about information-giving. Along with beautiful shots of Antarctica and cute shots of baby penguins, I suspect this is why it was more of a hit than a straight-up informative documentary would have been. 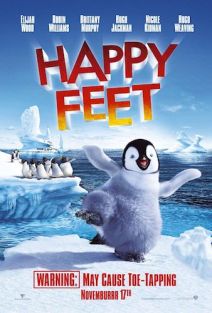 While it might not be in quite the same league as The Incredibles or Finding Nemo, this year’s Animated Oscar-winner does have a few things going for it.

There are a couple of enjoyable songs, a few exciting action sequences, and even some bits that actually make you laugh. Couple this with a positive (if improbable) pro-environment message, and an even better anti-religious one that’s only half-hidden, and you have an entertaining film for kids that grown-ups will find something in too.