So, this TV overview is a little later than normal — a full nine days, in fact — but I guess no one notices that but me, so let’s get on with the shows:

Adapted from the series of novels by Robert Galbraith — the mystery-writing pseudonym of one J.K. Rowling — you might’ve assumed this would’ve followed in the footsteps of the author’s other literary series and have Hollywood come a-knocking. Maybe they did, but TV is a more natural home for the material: it’s a decent low-key murder mystery with appealing lead characters, which is the sort of stuff that can generate TV ratings but doesn’t spell box office nowadays (well, unless it’s Murder on the Orient Express, with its $350 million worldwide gross, but that’s a different kettle of fish). While the general shape of the drama is familiar from, well, every other TV detective show, Rowling’s well-known interest in social issues regularly comes through — not least in its two main characters, one of whom is a war veteran living with the realities of an amputation, the other a talented woman finding equality in the workplace. I suppose that’s all very timely.

The series’ biggest challenge is not whether it’s original or not (that’s clearly not a problem), but may be whether it can keep itself going long-term. Rowling isn’t the type to let other writers dream up new stories for her characters (the path that ends up fuelling most initially-book-based detective shows), but she’s not exactly pumping the novels out either: this first series adapted the initial two books; an adaptation of number three starts tomorrow; and… that’s all she’s published, for now (there are reportedly plans for ten more books). Will Strike end up with a Sherlock-esque production schedule? Or will it just quietly disappear when viewers and/or the cast lose interest after a couple more adaptations? Only time will tell…

Having blown the doors off its own enjoyable premise with a clever twist at the end of season one, I was worried The Good Place had left itself with nowhere to go in the future. Fortunately, that isn’t the case. A cleverly-structured double-length opener burns through what I thought would be the entire second season’s plot, and then the second episode burns through even more ideas at a rate of knots. Where most sitcoms find an idea and milk it for all it’s worth (that’s the “situation” part, after all), The Good Place is restlessly inventive.

That said, it does begin to settle into a new status quo, and at that point it goes off the boil a little. It’s still funny, but not so much as the first season was, and by standing relatively still it’s not as exciting. But then, a little over halfway through, it begins to tear it all apart again, and we’re off on a wild ride where you don’t quite know where things are going to end up — there are several episodes that most other shows would’ve been more than happy to make their finale, but The Good Place just keeps up the “and what happens after that?” barminess. But it does have to end eventually, of course. It doesn’t have a massive twist to rival the end of season one, but then trying to top that would be a fool’s errand. No, instead it sends the show spiralling off in a whole new direction. Superb.

Stana “Beckett from Castle” Katic stars in this mystery-thriller, an Amazon exclusive in the US and UK (and everywhere else there’s Amazon Video, I presume). She plays FBI agent Emily Byrne, who was declared dead in absentia after she disappeared while on the hunt for a serial killer. Six years later, she turns up alive, apparently having been held captive all that time — even though the main suspect was convicted of her murder and has been in prison. Events quickly take a turn where her former colleagues wonder if Emily was in on it too, meaning she has to go on the run to prove her innocence. Of course, none of those people ever stop to wonder what she’s actually been up to for six years (it’s not like the killings continued), or why she’d decide to fake her comeback now, or… all sorts of other things. A subplot with her kid — who was too young to remember her, and now has a new real mom because his dad remarried — has emotional potential, but goes a bit too swimmingly at first and then is soon abandoned in favour of shoot outs, and unearthed skeletons (both figuratively and literally), and all that mystery-thriller stuff. So this isn’t one to think about too much, in any respect, but it’s passably entertaining as a pulp thriller. I’m going to stick with it until the end, at least, but I kinda hope it doesn’t try to end on a cliffhanger — I’m not sure I want a whole other season (or two, or three, or more). 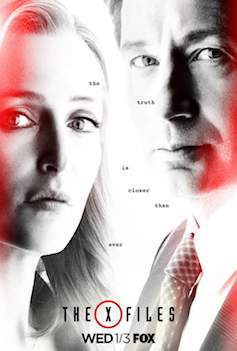 The second season of The X Files since its revival only recently started airing in the UK, but we’ve caught up as far as episode three now. Well, the broadcasts have — I’ve only watched the first episode, and it was so goddamn terrible I’ve not had the heart to continue. (I will, I’ve just not mustered the motivation yet.) Said opener was My Struggle III, continuing the series’ never-ending mythology arc plot, which last season (two years ago now!) was covered in My Struggle I and My Struggle II. Well, at least the mythology episodes are clearly marked these days — there’s a My Struggle IV later in the season, for our sins.

Anyway, the problems with My Struggle III are manifold, but the key one is that it’s confusing. Partly that’s because it plays heavily off what happened in Part 2 — which, as I say, was two years ago now — and partly because it all builds on the entire history of the series’ overarching storyline, which is long and complex and I haven’t even seen all of. (Someday I need to sit down and properly watch the entire show, all 218 episodes of it. Goodness knows when.) But even allowing for that, this was a bad hour of television — poorly made, with strange stylistic choices (what was with all that random voiceover from Mulder?) Ugh. But hey, I guess most of the season will be standalone monster-of-the-week episodes; and while that as a format has fallen out of favour in the past couple of decades (everybody loves serialisation now), I think it’s what The X Files has always done best. 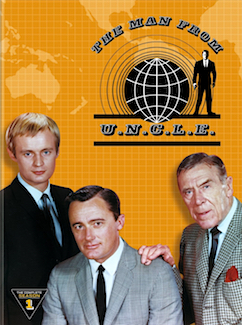 I’ve had this knocking around waiting to be watched for yonks after I picked up the complete series DVD set on offer. (“For yonks” being “since 2015” in this case.) I remember seeing some episodes as a child and enjoying them, though I don’t remember any specifics. I guess they were from the show’s later, crazier, full-colour years, because these early black-and-white adventures don’t quite chime with that vague sense-memory of what the show should be. That said, although they start out almost serious (as ’60s spy-fi goes, anyway), by just a couple of episodes in there’s already a kookier side on display. Anyhow, I expect the best is yet to come.

Murder on the Blackpool Express

This one-off feature-length comedy aired at the end of last year, presumably timed to tie-in with the theatrical release of Kenneth Branagh’s Murder on the Orient Express — as the spoofing poster highlights, of course. (Who thought I’d wind up referencing that film twice in a TV column nearly four months after it came out? I really ought to get on with reviewing it…) Truthfully, that poster is probably the best thing about this. There’s a large cast, all recognisable from a host of British sitcoms, but half of them go underused. Those that do have a part to play get material that’s fairly amusing, amid a plot that’s somewhere between predictable and too mad to be guessable. It was funny enough on balance, but it didn’t live up to its full potential.