At the risk of my blog becoming some kind of film-watching Inception, with a host of viewing goals within viewing goals (the titular one; “What Do You Mean You Haven’t Seen” / Blindspot; all those ones I mentioned in my review of Home on the Range), here’s something new I’m setting out to do (in a vague, loose, ‘will get there one day’ kind of way):

Regular readers will surely remember iCheckMovies, the movie list website where you can check off films you’ve watched and see how many you’ve seen on particular lists, like the IMDb Top 250, or They Shoot Pictures’ 1,000 Greatest, or 179 other ‘official’ lists (or 8,603 user-added ones — seriously). Obviously you can use this as an empty-headed list-completing exercise (and some people do), but it’s also a way to motivate watching well-regarded movies, and to discover new ones.

(What does this have to do with Disney’s dear deer meeting Tokyo’s greatest monster? I’m getting to that.)

There are several lists in particular I have my eye on, for one reason or another. Getting around to some more films on those lists was part of the motivation behind my selections for this year’s WDYMYHS, for example (most of the motivation, if I remember rightly). However, even while I’m a decent way through completing some lists, I happened to notice last night that there are a handful of those 181 official lists on which I have precisely zero checks. 26, to be precise, which in some ways sounds like a lot, but in others is only 14%. Naturally, this inspired one particular thought: to endeavour to get at least one check on every single list.

(The bereaved fawn and gigantic lizard are coming up imminently.) 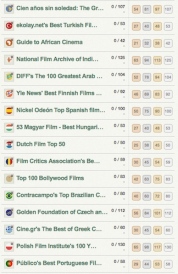 There are pretty obvious reasons why I’ve never seen any films on many of those lists — quite a lot are country or continent specific, and as Western film viewers we’re notoriously poor at having seen movies from, say, Africa. The lack of acclaimed films I’ve seen from the likes of Belgium, Finland, Holland, Hungary, Norway, Poland, Portugal, and Spain is my own fault though, I guess. Anyway, this is something I intend to rectify in the coming days / weeks / months / years / decades — however obscure some of my missing lists may seem, there’s at least one film I’ve heard of on all but one or two of them, so there’s that.

Anyway, I started with the easiest list of all lists: Best Cartoons Ever – A Gift List From Jerry Beck. This list contains “the 50 greatest cartoons of all time, from a poll of 1,000 animation professionals conducted by author/film historian Jerry Beck for the 1994 book The 50 Greatest Cartoons: As Selected by 1,000 Animation Professionals.” There’s all sorts of famous stuff on there, from 1914’s Gertie the Dinosaur, to Mickey Mouse’s debut in Steamboat Willie, to acclaimed classics that appear on multiple other lists, like Duck Amuck and What’s Opera, Doc? But I started with possibly the shortest of the lot: 92-second one-gag short Bambi Meets Godzilla.

I say “one-gag” — there’s one headline gag, but I’d argue there are at least five jokes slipped into the film’s minute-and-a-half running time. Describing the ‘plot’ would be pointless, especially when it would be almost as quick for you to watch it yourself on YouTube; or, if you really want, a couple of years back a fan restored/remade it in 4K with 5.1 surround sound (seriously), which you can watch here. It loses a lot of its charm in that form, if you ask me. Either way, there are less amusing ways to spend 90 seconds of your time. 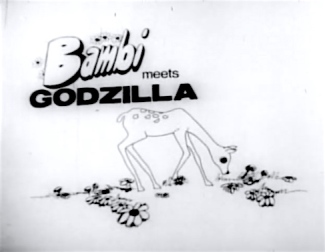 Why is this film notable? In fact, is it notable? Well, it was voted in to The 50 Greatest Cartoons by some of 1,000 animation professionals, so there’s clearly something there. It was created by animator Marv Newland while he was a film student in L.A., after a live-action project he’d been planning to submit was scuppered (according to Wikipedia, uncited, that was due to the loss of “an essential magic hour shot”). Newland created the short animated gag in his room and submitted that instead. It’s a pretty straightforward piece of animation — black-and-white line drawings, some text, few moving elements — with a couple of music tracks on top (Call to the Dairy Cows from Rossini’s William Tell, which you might not know by name but will certainly recognise, and the final chord from the Beatles’ A Day in the Life).

Maybe it’s the subversiveness that makes it significant? It comes from an era when that must have been a factor, surely — there’s a certain Monty Python-ness to it, and it was made the same year Flying Circus first aired. Perhaps it just has some familiarity — I’ve seen comments by people saying it was regularly screened at sci-fi conventions throughout the ’70s, and it was attached to film prints and VHS releases of Godzilla 1985. There are even two sequels, Son of Bambi Meets Godzilla and Bambi’s Revenge, which weren’t made by Newland and are apparently hard to come by. I suppose Beck’s book must explain its inclusion, but if anyone has a copy of that to hand then they’ve not bothered to quote its entry online.

Anyway, for what it is it’s very effective, but it is slight, so I shall give it: