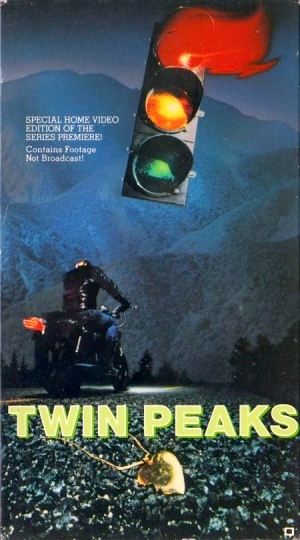 While they were seeking funding for their feature-length TV pilot, creators David Lynch and Mark Frost agreed to demands that they film an alternative ending that wrapped up the episode’s primary mystery. The thinking was that, if the pilot didn’t get picked up to series, it could be released in Europe as a complete movie (why it couldn’t also be released in the US as a movie I don’t know), thereby recouping some of the cash spent on it. Apparently Lynch and Frost forgot they’d signed up for this until towards the end of the shoot, when they were reminded of their contactual obligation and so dashed something off.

But the series did get picked up, and that half-arsed ending should’ve been consigned to the dustbin of history. Instead, Twin Peaks became a massive worldwide phenomenon, and whoever owned the rights to release the movie version exercised said right, naturally including the tacked-on conclusion. Although the rights situation was settled long ago, the ‘extended’ version is still routinely included alongside the proper one on disc releases. I thought it was about time I checked it out — and judged it as a standalone movie, of course. 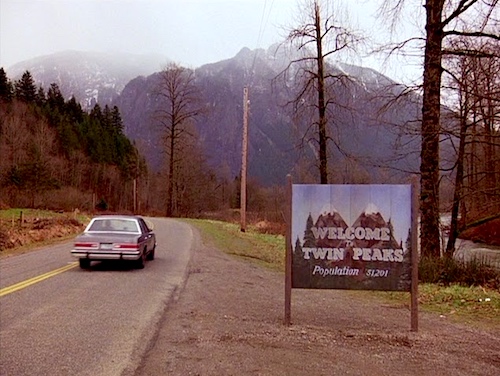 Obviously, for most of its running time the so-called “international version” is identical to the broadcast version of the episode. I would contend that is one of the greatest episodes of television ever made. Everything about it is sublime. For starters, it establishes Twin Peaks’ world quite methodically. We’re gradually introduced to the police station, the mill, the Great Northern hotel, the Double R diner, the school, character’s homes — not just literally the locations, but the people who inhabit them, including their relationships to one another, both public and secret. There’s a ton of information to absorb here, but it’s all laid out so neatly that it doesn’t feel like a chore. There’s also a lot of potential plot lines started or hinted at, which makes a good deal of sense for kicking off a series but (as we’ll see in a bit) is not such a good idea for a two-hour movie…

The episode is also incredibly strong in a filmmaking sense. Thematically, there’s the typical Lynchian obsession with the darkness hiding behind seemingly normal, perfect American lives. It’s not just the weird murder, either: pretty much everyone is sleeping with someone they shouldn’t be, or having some other domestic issue. That’s also very soapy, but that’s deliberate. It’s neither parody nor homage per se, but it’s definitely influenced by how soaps perceive and portray the world. Interestingly, at this point Twin Peaks could be considered just a crime drama with a few quirky characters — all the supernatural weirdness the show’s so known for begins in the next episode (and doesn’t fully kick into gear until the second season).

Visually, Lynch’s shot composition is fantastic, with a strikingly great use of the frame and blocking — very precise, very neat, ordered, but not in a self-conscious, Wes Anderson kind of way. It seems mindful of being shown on the relatively small television screens of the era, but also maintains a quality that carries over to this day. Beyond the purely visual, the content it creates is remarkable too. The sequence in the high school, where the news about Laura gradually comes out before it’s officially announced, is incredible — the way people slowly begin to suspect, the way characters react, the way Lynch is unhurried in letting this unfold. Having watched the episode a couple of times this year now, I think this part is one of my favourite scenes in the whole of cinema. The way it builds to that somehow-perfect shot of Donna sat at her school desk crying is majestic.

However, when judged as a standalone movie, Twin Peaks is a disaster.

After an hour-and-a-half of sheer quality, we reach the 19-minute tacked-on ending. This climax is rushed, simplistic, and refuses to touch on the vast majority of the episode’s subplots. I mean, of course it doesn’t — it was a rush job at the end of production to fill a contractual requirement. It wraps up the Laura Palmer case as quickly and perfunctorily as it can, then Lynch basically says a humungous “eff you” to the notion of having to do a movie version by bunging in a nonsensical dream sequence.

For those who are curious but not minded to sit through the whole thing, I’ll outline what actually happens. The deviation comes in the final scene of the episode as broadcast: instead of having a vision, Sarah Palmer has a flashback to when she was hunting for Laura that morning, realising she saw the killer hiding in Laura’s bedroom. (This, at least, is an effectively creepy notion. Was he actually visible in the quick panning shot of the room we saw earlier on? I daren’t go back to check. Seriously.) Sarah has Leland call Lucy, who’s hanging out at home with Andy (their amusing home life, otherwise unseen in the series, is probably the only reason to watch this). Lucy phones Sheriff Truman so he and Hawk can go to the Palmers and get a police sketch of the killer. Meanwhile, Agent Cooper is awoken by a mysterious phone call (there are lots of phone calls in this) from a man who knows unreleased details about the Teresa Banks murder. The man insists they meet at the hospital, so Coop calls Lucy and tells her to tell the sheriff to meet him there with the sketch.

At the hospital, they discover the mysterious caller is the one-armed man, Mike, who identifies the sketch as Bob. He also babbles some other stuff which I’m not sure has much meaning in this version, but was recycled for one of his later appearances in the series proper. Mike reveals that Bob is currently down in the hospital basement. Harry and Coop pop down there, confront Bob, have a little natter with the creepy killer (whose creepiness is considerably diluted by his chattiness, if only for the duration of this scene). Then Mike barges in and shoots Bob dead. Coop delivers a kind of one-liner, before a title card informs us it’s “twenty-five years later”. Then the famous Red Room scene plays out, just like it does in Episode 2 — and if you thought it made almost no sense in the context of the series, it makes even less here. Where is Coop now? Who’s the little guy? Why does he talk funny? Why does his cousin look like Laura Palmer? What’s she on about? What does she whisper to Cooper? Why are we being shown any of this?! It came to Lynch in a vision, and he liked it so much he repurposed it for the series, where it eventually came to have meaning (some meaning, anyway)… but here it’s utterly aimless.

This international version of Twin Peaks was never really meant to be seen, and it’s obvious Lynch and Frost felt that way when concocting its final act. That ending is rushed in what it does bother to conclude — and, compared to all the plots we’ve just spent nearly two hours watching, what it concludes is not very much. The killer isn’t even one of the people we were considering as suspects. Thank goodness this isn’t all Twin Peaks ever was.

The pilot as broadcast is a five-star masterpiece; not just the start of something truly special, but something remarkable in and of itself. The extended standalone version is so ruined by its final 19 minutes that I can only rate it:

Tomorrow: fire, walk with me.