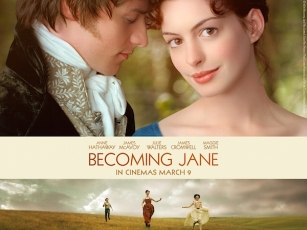 Director Julian Jarrold seems to have found his cinematic niche in “coming a bit late”. His Kinky Boots, while entertaining, was reminiscent of films like The Full Monty… except 8 years later; Becoming Jane rides the Pride & Prejudice bandwagon… except 18 months later; and his latest, the new Brideshead Revisited, had something of the Atonements about it… except 6 months later. At least his lead times have got shorter.

Perhaps Jarrold’s other inspiration here was Batman Begins. No, bear with me, for this is Austen Begins: Jane’s literary career has yet to start, but as the film progresses we see something of her personality taking shape — and plenty of the inspiration for her novels. Lord alone knows how factual any of it is, but I’m sure it must be a lot of fun for certain Austenites. On the other hand, purists might be less pleased with their idol being constantly lovelorn and indulging in (whisper it, children) snogging. For those with only the most cursory knowledge of Austen’s work, these might be the only things that stop them believing this is an adaptation of one of her novels; though, in truth, they’re probably not even that intrusive.

The big advantage to this being a somewhat Hollywoodised version of the story is the slew of English acting talent on display. Julie Walters, Maggie Smith and Ian Richardson are all present, in roles of varying sizes, plus the younger Anna Maxwell Martin (Bleak House) and Laurence Fox (son of Edward); not to mention James McAvoy, busy appearing in everything under the sun at the time. In the lead role, Anne Hathaway does a fine job, though there’s the inevitable question of “why not cast a Brit?” (to which one must assume the answer is, “for the sake of the US box office”). At least her accent is good.

Becoming Jane is a Jane Austen biopic treated as if it were a Jane Austen novel. In fact, so much is it embedded in the writing of Pride & Prejudice — and the notion that most of that was inspired by her own life — that it occasionally feels like another adaptation of it. This approach is a little uncomfortable in places, though probably makes sense considering the target market; and, by being so relatively lightweight, the resultant films seems to have faced less criticism from some Austenites than the similarly-timed TV biopic, Miss Austen Regrets. It’s for precisely this reason that the latter was a superior product, however: it may be darker and less uplifting — it ends with Austen’s death, rather than the start of her literary career — but it has a level of reflection that makes it more than Austen-Lite. Unlike this.