This is one of those films that crops up in the daytime TV schedules now and then and I’d always paid little heed to, because no one else seemed to. Then I read this write-up on Movies Silently and my interest was piqued. (There are many films of interest or recommendation that I haven’t got round to years after hearing of them; other times, I learn of something and watch it more or less instantly. What this says about me I don’t know, but we’ll just have to live with it.)

Ladyhawke is an ’80s medieval fantasy, though relatively light on the fantasy — it’s not Conan the Barbarian. It’s more like an old romance, in the “classical literature” sense rather than the “movie genre” one. (Apparently Warner Bros even marketed it as being based on a real medieval legend, until the screenwriter who actually came up with the story complained to the WGA. Reportedly they paid him off and continued to claim it was a legend. Ah, Hollywood. (Though he has a “story by” credit on the poster, so this may be apocryphal.)) The story concerns fugitive thief Philippe (Matthew Broderick) finding himself indebted to hawk-wielding swordsman Etienne of Navarre (Rutger Hauer), who wants revenge on the bishop (John Wood) who had also imprisoned Philippe — the fact Philippe escaped those dungeons is Navarre’s key to getting in. To add intrigue, that night Philippe is almost murdered by a giant wolf and encounters a mysterious beautiful woman (Michelle Pfeiffer), who disappears with the beast.

“What’s so fantastical about all that?” you may be asking, if you a) have never seen any promotion for the film, and b) didn’t decode the title. So let’s forge ahead with ‘spoiling’ it: the woman is a hawk by day, the man a wolf by night, and they are cursed lovers. See what I mean about “classical-style romance”? The revelation of their situation is played in-film as a mystery and then a twist, and yet it’s central to the film’s concept, how it was marketed, and how it’s discussed today. I always find it weird when movies treat as a big reveal something that’s been readily given away in advance.

Here, there’s a good 45 minutes or so of mystery before said reveal. Obviously, therefore, it would work better as a fresh viewing experience if you didn’t know that going in; but it’s so fundamental to the setup (despite the focus on Philippe, it’s their story) that I wonder if anyone has ever seen it without knowing? On the bright side, it doesn’t really matter: this is not a film where the ‘big twist’ is the point.

Indeed, there’s so much to commend Ladyhawke that I remain baffled as to why I wasn’t more aware of it. Well, there’s one possible explanation: the score. Oh, the score. It’s so reviled that I think it single-handedly explains the entire film’s lack of recognition. The work of prog rocker Andrew Powell, it’s very “of its time”, which means it now doesn’t seem to fit the genre… though, based on people’s comments, I’m not sure it ever did: the music one associates with “the ’80s” has very little in common with what we think of for “medieval fantasy”. It does have its moments though, usually once individual cues have got underway. You’d think you’d get used to it, but no: every time a new bit starts, it still jars. Ah well.

Nonetheless, a terrible score (or “debatably terrible” — it has its fans) is no reason to write-off an entire movie — just look at GoldenEye. Ladyhawke’s many enjoyable elements include some absolutely stunning locations and scenery, often beautifully lensed by Vittorio Storaro. There are good action sequences, in that more freewheeling, less hyper-choreographed way older movies have. They’re also not an end to themselves: this is a story, not a series of set pieces strung together. Concurrently, the screenplay (credited to three writers) is nicely balanced. It’s not a comedy, but it doesn’t feel the need to be po-faced either; the romantic adventure storyline is played straight,

but Philippe occasionally addresses amusing asides to God, for example. It even wisely dodges special effects… most of the time. The few occasions on which it does make motions in that direction, it demonstrates why it was wise not to attempt them more thoroughly. These days they’d slather on the CGI, but shying away from such things is not just due to a lack of technology: it’s far more magical to not be too explicit.

The film also offers an array of likeable characters and performances. For starters: Rutger Hauer as the good guy! Wonders will never cease. In fact, he was originally cast as the villainous captain of the guard, but when the original Navarre, Kurt Russell, dropped out, Hauer got a promotion. It’s a shame, in a way — no offence to Ken Hutchison, who does a solid job, but I wager Hauer would’ve given the villain more presence. Equally, he lends the heroic knight something of an edge that other actors might not have brought. As for the rest, Broderick is a likeable lead; you can believe everyone falls in love with Pfeiffer; Leo McKern turns up as a suitably wise old hermit; and oh look, it’s Alfred Molina, with crazy hair and some prosthetic scars playing a wolf hunter. John Wood’s nameless bishop is an odd primary villain, though. Not afforded much screen time after a couple of scenes early on, we mainly learn of his evil deeds from other characters. Come the climax, he mostly stands there in silence while he’s defeated.

I do wonder if, had I seen Ladyhawke as a kid, among all the other family-friendly ’80s SF/F I watched back then, would it be a beloved childhood favourite? I think it might. 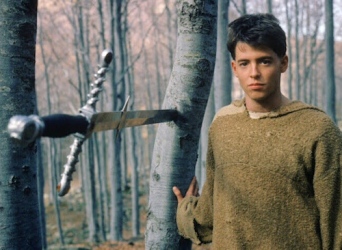 That’s the kind of age when one might be liable to fall in love with it; or, at least, people of (very roughly speaking) my generation would — I suppose Kids These Days fall in love with copious CGI, be that animated or ‘live action’. Anyway, I think it deserves to be less overlooked, and if you’ve never caught it (or not for a while) it certainly merits a chance.