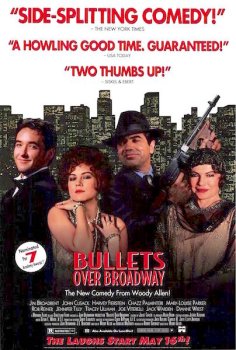 The final Woody Allen film of this little ‘season’ is that rare thing: one that doesn’t star him!

This is its biggest flaw, as John Cusack spends the entire film doing a blatant and middling impression of the writer/director. But he nonetheless does OK, and when the rest of the cast are note-perfect, the script pacy and funny, the photography gorgeous, and the long takes never more appropriate, it’s hard not to be impressed. Special mention for the final scene, a four-way shouted conversation between two high windows and the street — it’s beautifully written and executed.

Another underrated Allen film, and probably the most down-right entertaining of his I’ve seen so far.