Inspired by the infamous Josef Fritzl case (but most decidedly not a a direct fictionalise thereof), Room is a drama about a horrific crime — at times it could even be said to be a crime thriller — but it’s not interested in dealing with the usual outcomes of such filmic narratives; namely, justice or revenge (or both). Rather, it has a goal both more realistic and humane: it’s about the victims, and the psychological toll the crime exerts upon them.

It’s told primarily from the point of view of Jack (Jacob Tremblay), a five-year-old boy whose entire world is Room, the small space he lives in with his mother, Ma (Brie Larson). What Jack doesn’t understand, but is quickly obvious to the viewer, is that they’re being held captive by ‘Old Nick’ (Sean Bridgers), who visits nightly for… well, you can guess what for. Ma has tried to keep Jack sheltered from the reality of their situation, not telling him properly about the outside world — until one day she hatches a plan for their escape.

Which possibly makes Room sound more action-packed than it is. There’s a sequence of edge-of-your-seat tension in the middle of the film, when Jack and Ma execute their plan, but otherwise this is a very grounded movie. Obviously the situation the characters have found themselves in is pretty extraordinary, but we know these things happen (Fritzl is, sadly, not the only example), and Room is committed to being a plausible exploration of such cases rather than an adrenaline-fuelled Movie version.

This is a spoiler, really, but it’s also vital to understanding the film’s point and focus: that escape attempt, which occurs more-or-less exactly halfway through the movie, is a success. After seeing the existence Jack and Ma endured inside Room for the first half, the second is about how they adjust and cope to being in the real world after their ordeal. This half-time switch-up is the film’s primary strength. A comment I read online taps into why that’s the case: “At the beginning it was great. I thought it was gonna be a claustrophobic thriller/horror film following the line of others like Cube, Panic Room or even Das Boot… I got the feeling that if they would had escaped later on, the film would have been better.” This person is, of course, wrong, and their own comment demonstrates why. Sure, you could make this kind of story into “a claustrophobic thriller/horror film”, but that would be a genre B-movie and nowhere near the psychological realism (and, by extension, respect for real-life victims of such crimes) that Room is clearly interested in. I have to reluctantly agree that the first half is the more gripping and involving, but the second half — the having to cope with the psychological fallout once their ordeal is over, a very real but much less-seen aspect of crime — is where the meat and heart of Room lies. Or wants to.

The thing is, is it the case that the characters’ situation is inherently emotional, and therefore it’s pretty hard for a film about it to not elicit strong responses, rather than that this film in and of itself is doing anything particularly special? Some would give that an emphatic “yes” — criticism of Lenny Abrahamson’s plain direction abounds. I think that does him a disservice. This is not a showy movie, but nor should it be. Saying it’s no better than a cheap cable TV movie shows a lack of understanding for the quality of being understated, and the difference between that and thoughtless point-and-shoot quickie filmmaking. Indeed, the wiseness of the filmmakers in not giving the story an overly histrionic treatment is one of its biggest assets. 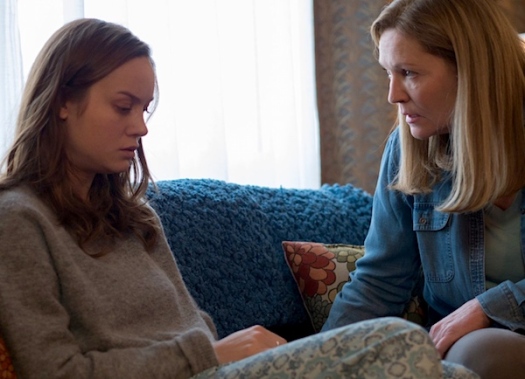 Another is the performances. Larson is excellent, full of subtleties even when called on to enact more obvious Dramatic Moments. Ma runs the emotional gamut throughout the movie and Larson negotiates every changing facet with believability. Tremblay isn’t half bad either. I stop short of bigger praise for him because, frankly, I found his character pretty irritating at times, but that might be part of the point so maybe I’m being unfair. While those two are the natural focus, there are effective supporting turns from the likes of Joan Allen as Ma’s mom and Tom McCamus as her new partner, who gets one of the best scenes.

Despite these qualities, I was left wondering how much it had dug into Jack and Ma’s psychology, really? The decision to focus on the kid keeps us removed from Ma at some key points, giving us a snapshot of how she’s been affected rather than a detailed portrait. But we never fully get the psychology of Jack either. On the one hand that’s because, well, he’s only five years old; and on the other it’s because he’s lived his entire life in a situation we can only try to imagine — it’s hard to connect with his very unique worldview. That’s not to say the film fails entirely — there are moments, even whole scenes, where we’re able to access some level of understanding for what these characters have experienced — but as for the totality of it? Well, as I said, it’d be hard for the film to not generate sympathy just given the pure facts of the story it tells, but in terms of going further than that, I just felt there was something missing.

Make no mistake, Room is a very good, very affecting film, powered by two strong lead performances, but at the end I felt there was more left to understand about these characters and their experiences.

The UK network premiere of Room is on Channel 4 tonight at 9pm.

It was viewed as part of my What Do You Mean You Haven’t Seen…? 2017 project, which you can read more about here. 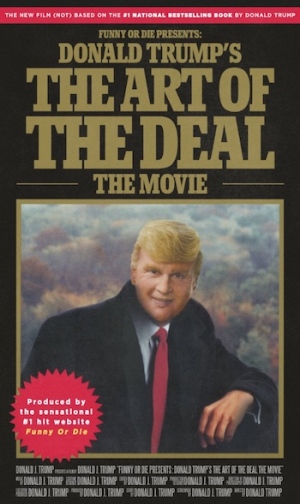 Almost a year ago, Donald Trump was still just a Republican candidate that half of the US and most of the rest of the world laughed at, waiting for something to come along and make him go away. And at that time, this was released: a feature-length(-ish) spoof from sketch comedy website Funny or Die, with a (sort-of-)starry cast, that no one knew was coming. That surprise factor — “a website that does short sketches has made a whole movie and it stars famous people and we didn’t know about it but it’s out now!” — is, frankly, the most memorable thing about it.

Introduced by Ron Howard, who supposedly discovered a VHS copy at a yard sale or something, the film poses as a lost ’80s TV movie produced by Trump himself as an adaptation of his best-selling book of the same name. Trump is played by Johnny Depp, under a pile of prosthetics and doing a passable version of that distinctive voice, who comes across a kid and relates some exploits from his life. There are cameo appearances by quite famous people like Alfred Molina, Henry Winkler, Stephen Merchant, Patton Oswalt, Robert Morse, Room’s Jacob Tremblay (looking vacantly amused), and Christopher Lloyd doing what most of his career has consisted of these past few years: playing Doc Brown in a Back to the Future joke/reference. There are some other people who get billed above some of those people, so maybe they’re also famous in America, I don’t know.

Considering its pedigree, it should come as no surprise that The Art of the Deal: The Movie plays like a very long, out of control sketch. Just like all sketch comedy, some jokes land better than others, and just like most sketch comedy, it begins to outstay its welcome by the end. It gets a lot of passes because Trump is so ridiculous that anyone taking the piss out of him is always welcome, and as such it ticks over with a level of slight amusement rather than outright hilarity.

Bits that do land include the ever-so-’80s title song by Kenny Loggins; the ethnicity of the kid suddenly changing every time Trump notices it; a bit about him paying tramps to piss in a building that (accidentally) has added resonance now; some of the comedy end credits; and a post-credit bookend with Howard, who declares that “we should probably just pretend that this film, and in fact Donald Trump, never even existed.”