As the 2020s loom, with the world in a scary old place for a whole host of reasons, why not retreat to the safety of the 1920s, when posh toffs ran the country because their birthright had put them there rather than because the hoi polloi had actually chosen to vote for them in some act of retrograde nationalism. Downton Abbey does actually feature a subplot where a group of working-class servants secretly plot to overthrow the system… but the system in question is the one about who gets to serve the King and Queen their dinner. The working classes fighting amongst themselves about something fundamentally unimportant while the upper classes carry on serenely above them? It’s almost allegorical, although I suspect not on purpose.

No, like the TV show it’s a sequel to, Downton Abbey is much too busy being a comforting blanket of “it was better in the old days” jollity to bother with social commentary. Creator/screenwriter Julian Fellowes throws in the odd nod to more progressive concerns (republicanism, LGBT rights, the fading fortunes and relevance of the aristocracy), but they’re no more than hat-tips in the general direction of modernity. It’s as if he’s trying to say, “yes, I know this is all terribly outdated,” before adding, “but why don’t we just enjoy it for a bit, eh?” Well, we do all need an escape into fantasy sometimes, and not everyone likes it in the form of a bespandexed private army battling purple aliens.

Certainly, you’ll need to be prepared to engage with the concerns of this rarefied world if you want to find any drama here, where major points of jeopardy include whether there’s enough time to polish all the silver and if they can manage to put some chairs out while it’s raining. Sure, there are subplots including things like an assassination attempt and a police raid on a gay bar, but they’re not treated as being nearly so significant as who cooks dinner.

So, yes, it’s mostly puff about pomp and pageantry — if you were after a film to perfectly encapsulate “heritage cinema”, you could hardly do better. But who would’ve expected anything else? Surely we’re all familiar with the TV series, even if you’ve never seen it, and naturally this big-screen version continues in a similar vein. At its core the series was really just a posh soap, and that style of melodrama is recreated here also: the engaged kitchen maid’s eye is caught by a hunky plumber; what’s behind the uncommonly close relationship between the Queen’s lady-in-waiting and her maid; will someone’s new royal appointment force them to miss the birth of their child; and so on.

If it’s beginning to sound like there are a lot of different storylines, well, there are. That’s another legacy of it originally being an ensemble TV show, of course: there’s a big, broad cast and every character must be given their due. Consequently, some reviews have accused the film of having no story, which I think is unfair. The primary plot is simple — literally just “the King and Queen visit Downton Abbey” — but it’s there. And the way the film chooses to depict this story — as a collage of subplots that, as a collective, show how the visit is prepared for and executed from the perspectives of a variety of roles at every level — is hardly an unheard of cinematic format for providing an overview of an event or situation. The reason for Downton taking this approach are rooted in its televisual origins, but if you wanted to consider it divorced from that context then you’d merely see a structural similarity to something like Nashville, for example.

Of course, the fact that Downton is a sequel to a six-season TV series is something most of us won’t ignore, whether because you’re a dedicated viewer coming to this as the 53rd episode, or you’re a neophyte with a background awareness that anything you don’t understand may be because it was explained in the TV show. I find myself in the slightly unusual position of someone who straddles both these stools: I stopped watching somewhere in the third series, so I know who most of the characters are and where their stories began, but I’m unaware of what went on for them in later years and who some of the later additions are. Fortunately, the highly structured class divide of the setting makes it easy to get a grasp on most things. Characters’ backgrounds are not as clearly explained as you’d expect to find in a truly standalone movie, but I think the fundamentals can be ascertained well enough. That said, I say that as someone who had a leg up from watching some of the series, so a total newcomer may find it more bewildering.

One thing that’s interesting, returning to this world as someone who skipped a few years of it, is how much the emphasis has changed in places. By which I mean, some characters who once had a major are now given short shrift. For example, Hugh Bonneville has always been the de facto lead face of the programme, which makes sense as he’s Lord Grantham, head of the Downton household; and he’s still top billed in the opening credits, although I think that may be more a happy accident (I believe it listed the entire returning series cast in alphabetical order) than an indication of status. Either way, he has very little to do here, with other cast members taking centre stage. The real headliner in the series was always Maggie Smith’s acerbic Dowager Countess, and that continues to be the case here, as she snags both the lion’s share of the funny lines and the film’s most genuinely emotional scene. It feels like something of an ode to the venerable actress herself as much as it is a bit of in-universe business, and who could really begrudge such merited reverence? As to the rest of the cast, there are plenty of reviews out there that approach the film in more detail from either a fan or newbie perspective, so if you’re interested in specifics it may be worth seeking those out.

Some might argue this movie could’ve just as well turned up as a TV special, and, story-wise, it’s hard to disagree. Nonetheless, director Michael Engler and DP Ben Smithard have given proceedings a bit of big-screen pizzazz, using a 2.39:1 frame to accentuate grander shot choices and occasional cinematic flourishes, and much of the photography exhibits a warm-sunlight glow that makes you wonder if they somehow shot the whole thing during golden hour. And while too many big-screen re-dos ignore the emotive power of familiar music (see the Spooks movie for one where I specifically complained about it, for instance), here composer David Lunn’s familiar Downton theme is used to striking effect. I must admit that, even as someone who didn’t stick with the series and hasn’t watched it for years, the opening minutes gave me goosebumps. 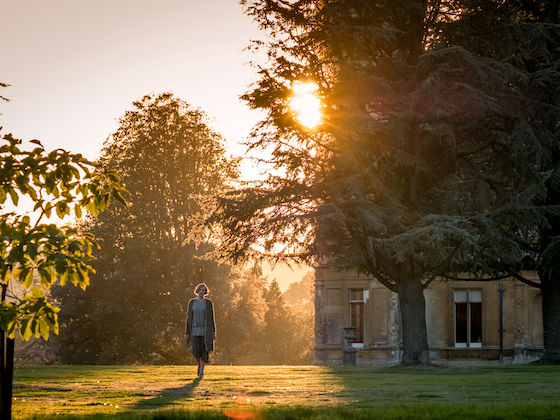 Truth be told, that’s not a terrible analogy for my reaction to the movie as a whole. Its near-fetishisation of regressive social modes should be distasteful, and some of its soapy scenes are accompanied by clunky dialogue and stiff acting that make it feel like you’re watching a period-dress episode of Coronation Street; but it can also unleash a sharp wit or well-constructed bit of farce (I laughed often), and there’s a certain majesty to the scenic, pretty-postcard photography that sweeps you up into its less complicated world. If you take it for what it is — a portrait of a time gone by — then it’s a likeable little jaunt.

Downton Abbey is in cinemas now.