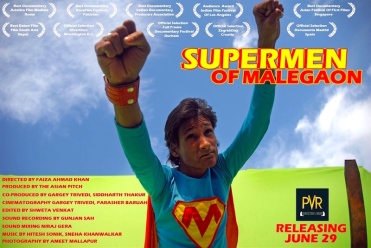 In the impoverished Indian town of Malegaon, everyone either works on the power looms and is paid a pittance, or is unemployed and so has even less; apart from the women, who are squirrelled away out of sight at home. The population is 75% Muslim, the remainder Hindu, and that leads to tension. Outside of work, there is nothing to do for entertainment… except go to the movies. And Malegaon loves the movies.

A number of years ago, one movie lover and video parlour owner, Sheikh Nasir, decided to make his own film. He remade the beloved Indian classic Sholay, but with its setting relocated to Malegaon, and turned it into a kind of spoof. It was recorded on video, edited VCR to VCR, by someone who had learnt filmmaking only by watching films themselves and seeing the behind-the-scenes outtakes on the credits of Jackie Chan movies. He didn’t even realise a film crew consisted of more than one person. Yet Malegaon ke Sholay was a local hit, and so Nasir decided to produce more. All of his films are spoof remakes of popular Bollywood and Hollywood productions, but set in Malegaon and engaging with local issues. They’re something of craze, so much so the people have a nickname for it: Mollywood. 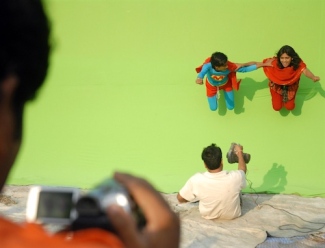 Supermen of Malegaon is the making-of story of Nasir’s most ambitious production to date. Having seen the use of greenscreen in one of those behind-the-scenes outtakes, he realised he could use the process to make a special effects movie — specifically, to make Superman fly to Malegaon. This documentary follows the trials and tribulations of Nasir and his band of hobby filmmakers through their film’s writing, planning, and its sometimes troubled shoot, until it’s completed. In the process, we meet some genuine characters, learn something of the unique lifestyle of Malegaon itself, and maybe even learn something about ourselves too.

The latter is the kind of claim liable to have your everyman viewer thinking, “yeah, right.” It’s a huge, horrid cliché for films to preach about following your dreams, or of finding something life enhancing through simple pleasures even when living in hardship; and generally movies that shove such ideals down our throats are gratingly earnest and/or sentimentally vacuous. Supermen of Malegaon is neither. There is no forcing here — insightful observations spring forth unassumingly; life lessons build up gradually and naturally. This is a film that doesn’t labour a point; doesn’t try to force some heartwarming message on you; but there’s every chance it will, almost incidentally, make you believe in the power of movies.

Even if it doesn’t, the situation in ‘Mollywood’ is an interesting one. This is a cottage industry: everyone involved has day jobs, funding the movies out of their own pocket, or by borrowing cash, or with favours, or by selling in-film adverts to local businesses — yes, that’s right, product placement, not that anyone involved would know that term. Women from Malegaon cannot appear in or work on the films due to local attitudes, so actresses are hired from nearby villages; the screenplay is written and shooting schedule arranged so that the actress only needs to be involved for the minimum number of days, to save money. Bicycles and motorbikes are used to create tracking shots; the director gets a piggyback for a high angle, or is raised and lowered on the arm of a cart to create a crane shot. The ingenuity and inventiveness of these literally-self-taught moviemakers is astonishing.

It really matters to them, too. As one young extra observes, people are keen to do anything they can to be involved, because being in a Mollywood movie buys you street cred in Malegaon. These things are that popular.

And yet it remains just a hobby… or it does for Nasir, anyway. He loves movies and so just wants to make them. He says that even if he was offered a job in Bollywood, he wouldn’t go. Not everyone shares his view: one of his relatives wants to make films as a career; Nasir is vocally against the idea — you can’t support a household doing this, he says. His films cost a pittance: at one point he tries to buy software to do the greenscreen and is quoted a price of $4,000, 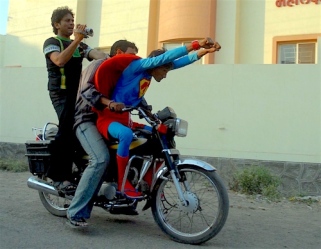 which he turns down because he could make four whole films for that much money. Even that little is scraped together. Mollywood moviemaking isn’t a money spinner, it’s a hobby. Still, one of the writers wants to make it as a proper writer; wants to go to Bombay and do it as his career. This has been his aim for 15 years, he says, and Bombay is no closer.

So there’s sadness here too, and controversy (to Western eyes, the position of women seems ludicrously unacceptable), and yet the ingenuity of these people, the endurance, the sheer love of cinema and the want to be involved, to not only recreate it but to forge something new, with their own enjoyment as the sole reward, is heartwarming, maybe even life enhancing. These are amateur filmmakers, working in their own backyard with a consumer video camera, who have greater integrity than all of Hollywood put together — and are still making movies, not falling to pieces and dying out, as Hollywood seems to think it would if it ever manned up.

In an interview, the director commented that “someone said after watching the film: ‘If you are about to give up on your dream, watch Supermen of Malegaon’.” I can believe that would work. A reviewer said that “if you don’t like it, then it can only mean that films were never really your thing in the first place.” A bold statement, but I’m inclined to agree.

It’s an incredible, one-of-a-kind film; more powerful and life-affirming than it perhaps has any right to be. But then the filmmakers of Malegaon don’t really care about such things. They make movies because they want to, whether they ‘should’ or not; they make them better than you might expect; and it enriches their lives. Their story may do the same for you. In my opinion, it’s an essential film; a true must-see.

The UK TV premiere of Supermen of Malegaon is on Channel 4 tonight at 1:30am. It’s also available on YouTube.

It placed 4th on my list of The Ten Best Films I Saw For the First Time in 2015, which can be read in full here.