Often billed as the first portmanteau horror movie, Waxworks only fits the bill in the loosest sense: its “three stories” are actually two stories and a dream sequence, the first (and longest) of which is, if anything, a swashbuckling farce.

But I’m getting a little ahead of myself. The film begins with a young writer (William Dieterle, who would later become a Hollywood director, responsible for 1938 Best Picture winner The Life of Emile Zola, amongst others) who is hired to pen backstories for the four statues in a carnival wax museum. Yes, four — the filmmakers ran out of money before they could film the fourth tale. As he begins writing, into each story he injects both himself and the museum’s curator’s daughter (Olga Belajeff) as his love interest.

The first tale is set in Arabian Nights-style Bagdad (IMDb says this part inspired Douglas Fairbanks to make The Thief of Bagdad, but a quick look at their release dates shows Fairbanks’ film came out months before Waxworks), and concerns a lecherous Caliph (Emil Jannings) who sets his sights on wooing a baker’s wife. It’s quite a sexualised segment all round: the baker kneads dough so erotically it sends his wife (and himself) all aquiver (I doubt it’ll do the same for many viewers, but it clearly works for them); later, the disguised Caliph sneaks into the baker’s home and spies the wife lying in bed with her back to him, and his gaze (and, by extension, ours) clearly lingers on her bottom (clothed, lest you think the film is uncommonly explicit). I guess the characters were too busy perving to apply logic to their decision-making: when the baker is too wary to slip a ring off the sleeping Caliph’s finger, he decides to chop his whole arm off instead. Totally reasonable. Meanwhile, why is the all-powerful Caliph worried about being found out by a lowly baker? Indeed, why’s he so worried that his guards will know he sneaks out at night? He’s the boss! On the bright side, there’s some beautiful and striking Expressionist set design; an exciting chase scene, set to dramatic percussive music in the new score by Bernd Schultheis, Olav Lervik, and Jan Kohl; and the wife’s save at the climax is a cunning twist. But, overall, it’s a bit of a daft farce. 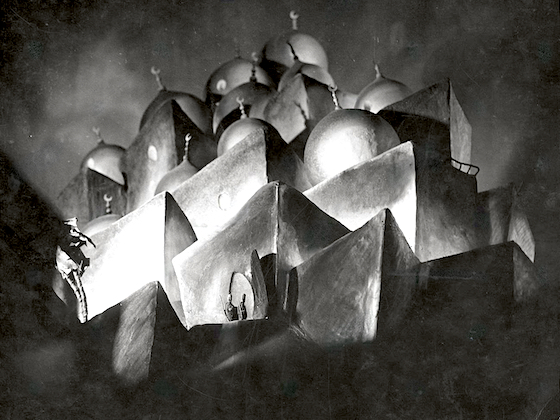 The second story stars Conrad Veidt as a Rasputin-esque Ivan the Terrible, who revels in killing prisoners in the Kremlin’s dungeons with an ultra-specifically-timed poison. If that wasn’t clue enough, this segment is thematically much darker. A bride’s father invites Ivan to attend the wedding, then the Czar insists they switch roles to travel there and the dad is killed by mistaken assassins. Then his arrow-pierced corpse is unceremoniously dumped on the front steps of his home while the wedding banquet continues inside; and when daughter sneaks away to grieve over his body, Ivan has some guards snatch her; and when the angry groom tries to attack Ivan, he’s ordered off to the torture chamber. Puts people who complain about rain on their wedding day into perspective, doesn’t it? Veidt is great as the deranged Ivan, although he’s so mentally unstable that it borders on comical. The finale doesn’t make much sense (he lets the girl go… then doesn’t?), but the denouement delivers a neat and fitting fate to Czar Terrible.

The third and final story begins with just five minutes of screen time left, so you know it’s not going to be wholly-realised tale. (Incidentally, the original German version of the film is lost, leaving us with only the English version, which is about 25 minutes shorter. What’s in those minutes? If anyone knows, they’re not saying online (to the best of my knowledge). Perhaps there was more linking material in the museum? Perhaps the third ‘story’ really was a whole story? Perhaps the first two were once even longer, though it’s hard to imagine how much more there could be to do in either of them — maybe the cuts were for the best…) Anyway, the third segment is the aforementioned dream sequence, in which the waxwork of Jack the Ripper comes to life and pursues the writer and his love (they met earlier that day but already seem pretty committed) through a series of highly impressionist sets, their disjointed oddity exacerbated by differently-aligned multiple exposures. It’s Expressionism to the max, and it’s suitably effective as a chiller. But, of course, it’s all a dream… and that’s suddenly the end! 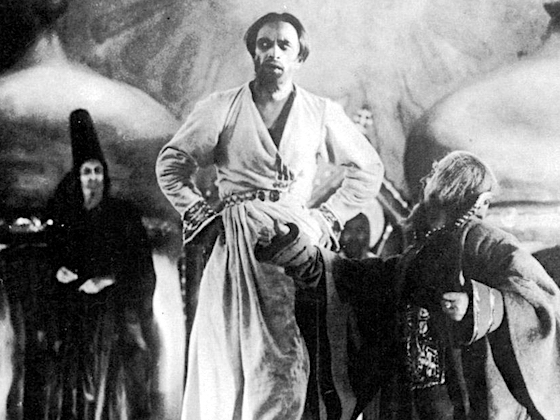 Like so many of the portmanteau films that have followed in its wake, Waxworks struggles to be the sum of its parts. It’s ultimately a bit underwhelming, with the first two stories being slower than necessary (and this is the cut version!) before giving way to a rushed finale. Make no mistake, there’s some very nice stuff in here, but it comes in bits and pieces. It’s a welcome watch for fans of silent cinema or early horror (with caveats about its “horror” content duly noted), and there are enough good parts to recommend it, but I wouldn’t argue it’s a classic in any enduring sense (beyond its obvious influence as a stepping stone to future portmanteau films).

Waxworks is streaming on AMPLIFY! until 22nd November, and is released on Blu-ray as part of the Masters of Cinema Series today.

Also, new on AMPLIFY! today are…

(If you don’t know, “bretzel” is the German word for “pretzel”.)

Disclosure: I’m working for AMPLIFY! as part of FilmBath. However, all opinions are my own, and I benefit in no way (financial or otherwise) from you following the links in this post or making purchases.