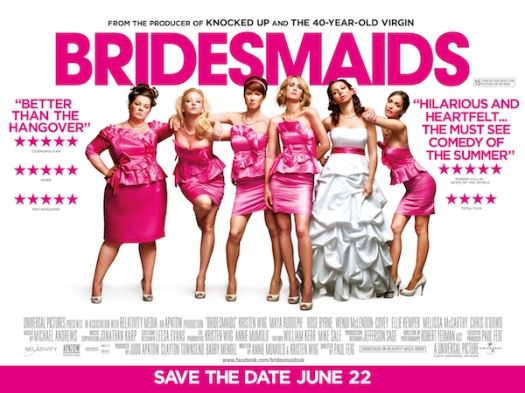 Bridesmaids opens on a shot of the outside of a house, but we can hear the people inside. It sounds like they’re having sex. “I’m so glad you could come over,” one says. Cut to a view of the closed bedroom door. Still sounds like sex. “Cup my balls,” says the male voice. Our assumption is still sex. Cut to inside the bedroom, where it looks like he’s on his back and she’s on top of him — you know, having sex. And it’s maybe at this point that you realise that, yes, they are just having sex — there is no clever, funny twist coming.

Thankfully this unimaginative sequence is not indicative of Bridesmaids’ overall quality. The female participant in that first scene is Annie (co-writer Kristen Wiig), a down-on-her-luck baker who’s struggling with life since her cake store went bust. When her best friend Lillian (Maya Rudolph) announces her engagement, she asks Annie to be her maid of honour. But Annie soon clashes with fellow bridesmaid Helen (Rose Byrne), the wealthy and glamorous wife of Lillian’s fiancé’s boss, who’s keen to replace Annie in Lillian’s affections. Wedding preparations and hilarity ensue.

Despite the rough start, there are some very, very funny parts later on; but, unexpectedly, it also works pretty well in more character-focused sections. You’re not going to mistake this for an emotional drama, but there’s more investment in the characters than you might anticipate given the cast and crew’s pedigree. I guess this is the on-screen result of a telling behind-the-scenes titbit: reportedly, producer Judd Apatow pushed hard for wild, physical comedy, while writers Wiig and Annie Mumolo preferred to go for subtler material. The film’s most notorious sequence — the diarrhoea scene — was largely at the insistence of Apatow and director Paul Feig. I feel like that probably explains a lot about how the film can be restrained and emotionally intelligent at times, and then ludicrously crude at others. 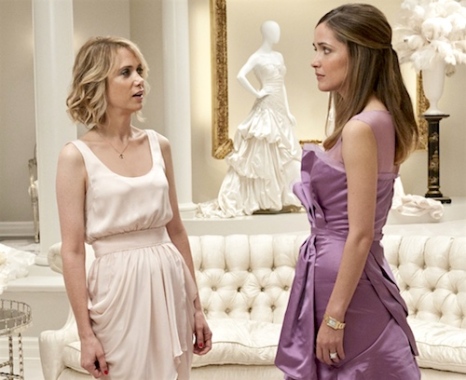 Maybe it also explains how it ended up being too long. The ideal length of a comedy movie is about 90 minutes, so crossing the two-hour mark feels needless. At the very least it could do with just a tighten — trimming some scenes, or even individual shots, would make a pleasant difference. And to think, there’s an extended cut!

Even more baffling is the fact that this earnt Melissa McCarthy an Oscar nomination, which is just… daft. I mean, she’s not bad, and it’s a bit of an excursion from the kind of roles I’ve seen her play otherwise — and doing something different to your norm is the kind of thing that attracts awards attention — but an Oscar? For this? No. That’s just silly.

I guess that was due in some part to the mass of praise Bridesmaids received on its release, after which there was (of course) a massive backlash. Until I read online comments before writing, I’d forgotten just how hyped it was, and how much people turned against that. With several years’ distance things have calmed down, which probably works in the film’s favour: freed from that pressure, it entertains as a largely funny, surprisingly emotionally astute female-driven comedy.

Paul Feig is a guest panellist on tonight’s episode of Insert Name Here, which is… random.