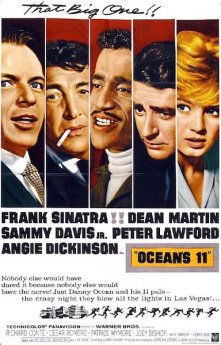 “Remakes are not as good as the original” is one of the rules of filmmaking. Of course there are plenty of exceptions, and everyone has their own opinion, and most modern remakes are expressly about making a quick buck from a US audience who can’t watch a film and read at the same time rather than making a better quality film — but, more or less, the rule persists. It may have won him an Oscar, but the consensus seems to be that not even Martin Scorsese can overcome this rule.

Steven Soderbergh’s star-studded 2001 remake of Vegas-set Rat Pack vehicle Ocean’s Eleven, then, is widely seen as a rarity in bucking this trend. And that opinion is right. This original is a scrappier film, with a less focused story and a seemingly endless number of scenes that are seemingly endless, no doubt due to the indulgence of allowing the matey cast to improvise much of the dialogue.

Indeed, the whole film is more about its actors, their camaraderie and humour, than the heist itself, which is fairly basic… and yet still shown in mundane, repetitive detail. Soderbergh managed to create a likeable, funny crew and an exciting heist, not to mention a story that didn’t feel like it was meandering on with no purpose, besting the original in every respect. 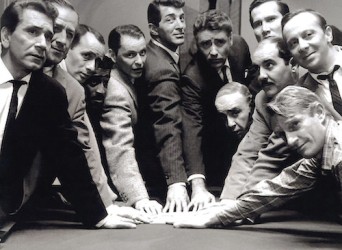 It does have its moments: a couple of songs are shoehorned in (even if there’s only two or three and each gets two or three airings) and the cast do succeed in making some of their indulgences entertaining. Nonetheless, this would definitely be for Rat Pack fans only had it not been for the remake… and, really, there’s no reason the remake should change that.

The two Ocean’s Elevens stand as proof that, given the right filmmakers, a mediocre original can be remade into a highly entertaining film. That would be a good new rule for Hollywood to learn. 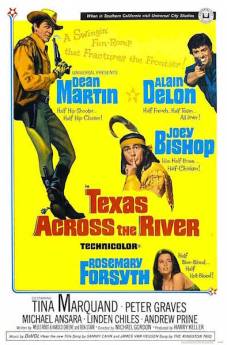 Texas Across the River hardly seems to be a well-remembered film — the only DVD edition available (as far as I can tell) is a legally-produced DVD-R, clearly in the wrong aspect ratio. I only come to see it because a friend happened to have a VHS as a child, enjoyed it back then, and we managed to track down that DVD. [It was later released on UK DVD in 2012. (Amazon claim 2007, which is clearly BS.)]

And actually, it’s a fairly entertaining film. Little more than a comedic Western runaround, it sees Alain Delon — as a Spanish nobleman — trying to get to Texas to escape the Cavalry (led by Jim Phelps himself, Peter Graves) and marry his betrothed. On the way he enlists the help of Dean Martin and his Indian sidekick. Hilarity ensues!

OK, so it’s probably funnier if you watch it before your age hits double figures, but it still has enough entertaining moments and decent gags that its complete expungement from almost anyone’s consciousness seems unwarranted.

I don’t expect it’ll ever undergo some miraculous revival (it’s not that good), and perhaps is of primary interest as a curio for fans of Dean Martin, Alain Delon or Mission: Impossible, but it made me laugh — and, as I believe I’ve said before, that’s all I really ask of a comedy.