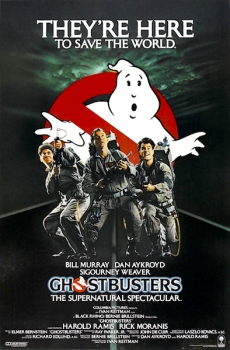 They’re here to save the world.

The Story
After losing their university jobs, a trio of paranormal researchers set up a ghost extermination business. They’re soon hired by Dana Barrett, who believes her apartment is haunted. Turns out it is, by an evil demigod who posses Dana and sets about bringing the world to an end…

Our Heroes
They ain’t afraid of no ghosts! Discredited parapsychologists Peter Venkman, Ray Stantz and Egon Spengler set up the Ghostbusters to combat the increasing problem of paranormal activity in New York City, and later recruit Winston Zeddemore to cope with demand.

Our Villain
Gozer the Gozerian, a Sumerian god of destruction. Likes to turn his servants into supernatural hounds and allow the good guys to choose the form of their ‘destructor’ — which is how you end up having to fight a 112½-foot marshmallow man.

Best Supporting Character
Among a strong cast of memorable characters, one has to feel for William Atherton as antagonistic EPA agent Walter Peck. Peck is so unlikeable that, according to director Ivan Reitman, it “ruined” Atherton’s life: people confronted him as if he were the character, including starting fights in bars. He’s just too good at being a slimy little so-and-so, I guess.

Quote Most Likely To Be Used in Everyday Conversation
“Dogs and cats, living together!” — Dr. Peter Venkman (well, we used it a lot…)

Memorable Scene
The Ghostbusters fail to stop the coming of Gozer, who shortly declares that the destructor will follow, in a physical form chosen by the team. Although three of them manage to clear their minds, something pops into Ray’s head — “the most harmless thing. Something I loved from my childhood. Something that could never, ever possibly destroy us.” Unless it was eleven storeys tall and motivated by evil, of course.

Sing the Theme Tune…
“If there’s something strange in you neighbourhood, who you gonna call?” Ray Parker Jr.’s theme song is as iconic as the movie itself. It lost the Oscar to Stevie Wonder’s I Just Called to Say I Love You. Won the BAFTA, though.

Truly Special Effect
The film is full of excellent effects work — all done practically, of course, in those pre-CGI days. That also means an abundance of techniques were used, from simple stuff like hanging things on wires or using wind blowers to make library cards fly around, to miniatures with a Godzilla-style man in a suit, to full animation for things like the proton packs’ streams. And it was all produced on such a tight schedule that, according to the film’s effects mastermind, 70-80% of the work was achieved in the first take.

Making of
Dan Aykroyd wrote the part of Winston with Eddie Murphy in mind, having just worked with him on Trading Places. When Murphy was unavailable due to working on Beverly Hills Cop, Ernie Hudson was cast. He was so excited by the part that he agreed to do it for half his usual salary, only to then receive a revised script in which Winston had a greatly reduced role. In 2015, Hudson commented, “I love the character and he’s got some great lines, but I felt the guy was just kind of there. I love the movie, I love the guys. I’m very thankful to Ivan for casting me. I’m very thankful that fans appreciate the Winston character. But it’s always been very frustrating — kind of a love/hate thing, I guess.”

Next time…
First came The Real Ghostbusters, an animated series that ran from 1986 to 1991 and produced 140 episodes (the addition of The Real to the title being due to another series from the ’70s). Due to its success, the cast and crew were cajoled into making a film sequel, Ghostbusters II, which scared the life out of me when I was about 4. In 2009, Ghostbusters: The Video Game used the likenesses and voices of many of the original cast, and Dan Aykroyd described it as “essentially the third movie.” Rumours and/or plans for a genuine second sequel persisted for a very, very long time (there’s a mass of details here, if you’re interested), though finally seem to have been abandoned in favour of this summer’s all-female reboot.

What the Critics Said
“The cast could not be better. Although his role is too small, Aykroyd is endearingly serious as a diehard, but easily scared, ghost-hunter. Harold Ramis, the co-writer of the script, is extremely funny as a hopeless egghead […] But Ghostbusters is primarily a showcase for Murray, who slinks through the movie muttering his lines in his usual cheeky fashion and getting off an occasionally hilarious crack that proves he’s thoroughly enjoying himself.” — Kathleen Carroll, New York Daily News

What the Public Say
“the use of special effects, specifically practical effect, shines as well. The ghosts may not be perfectly rendered, but they are so interesting in design and they have so much energy onscreen that you don’t mind it. The practical effects, like having the ground open up or drawers being opened by unseen ghosts are done very well. In a time where many effects-heavy films rely solely on CGI, it’s nice to look back to a time when practical effects were still commonplace in movies and done well in movies.” — Joey Sack, Reel Reactions

Along with Teenage Mutant Ninja Turtles and ThunderCats, I loved Ghostbusters when I was a kid — I had a dressing up set, with a jumpsuit and a proton pack with a yellow foam whatsit for the stream, and one of the traps, and an Ecto-1, and the firehouse playset, and one time I got my fingers caught in the grill on the roof (which was there to pour goo through, because toys) and I’m sure I panicked until liberal application of butter freed me… Good times. I guess back then my love for it was more to do with the animated series than the movie, but the film itself is a work of blockbuster comedy art. The characters are a joy to be around, the dialogue is hilarious and quotable, multiple sequences lodge themselves indelibly in the memory, the special effects are exemplary, and the dramatic stakes can be surprisingly effective for what’s primarily a comedy.

All together now: “bustin’ makes me feel good!”

#38 will have its revenge… in this post or the next.

Cult comedy musical, with a more-than-healthy dose of the surreal, about two brothers on a mission from God, here watched in the extended DVD version (full details at IMDb). Maybe this is why it takes a while to get going — the first hour or so could do with a kick up the proverbial — and has a tendency to sprawl like an unruly first draft.

On the other hand, its insistence at being random, crazy, and incessantly silly throughout is beautifully anarchic. There’s an array of fabulous cameos — Ray Charles! Aretha Franklin! and Carrie Fisher, feeding the anarchy with her ludicrous attempts to kill one of the titular pair. While there were fewer songs than I’d expected, they’re all classics rewarded with infectiously fun performances. Then there’s the climactic car chase, which surely challenges many more serious examples for pure excitement value.

And any film which sees Neo-Nazis jump into a river to avoid being run over has to be good.