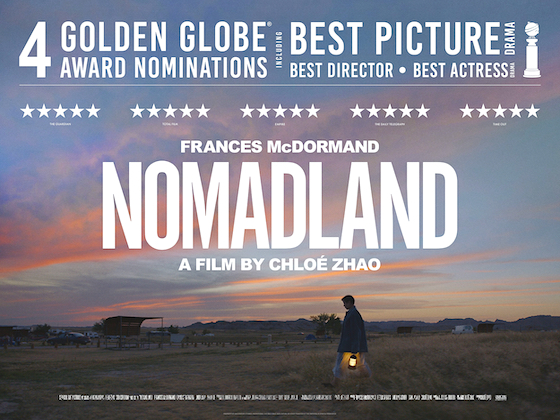 Having won the top gong at the BAFTAs, the Golden Globes, the PGAs, and the DGAs, plus various other smaller ceremonies, and at film festivals of varying significance, Nomadland topped it off by winning the headline prize at the Oscars last weekend, leaving no doubt that it’s been well and truly crowned the best film of 2020. Everyone will have their own opinion on whether it is or is not, of course, but there’s no questioning where the consensus lies. For me, this is the only one of the eight Best Picture nominees that I’ve seen to date, so if I would’ve preferred a different victor, I can’t yet say. Judged in isolation, however, it seems to me that Chloé Zhao’s film is a worthy winner.

The film follows Fern (Frances McDormand), a sixtysomething widow who ends up living on the road in a camper van, after the plant that provided work for most folk in her Nevada town is closed down in the wake of the late-’00s recession. It’s a lifestyle adopted by hundreds, perhaps thousands, of others: a whole community of modern-day nomads, travelling the American West in their van-homes, moving from one temporary seasonal job to another. It might seem fantastical — perhaps even dystopian — were it not based on a real-life subculture (and, in particular, Jessica Bruder’s nonfiction book Nomadland: Surviving America in the Twenty-First Century).

Indeed, Zhao’s film plays almost like a documentary, observing Fern’s experiences in long takes, or edited in that slightly choppy way that suggests it’s been cut down from hours of footage. This is compounded by the absence of any expository voiceover or dialogue; a welcome decision that substitutes telling us what to think for a confidence to rest the film’s weight on the shoulders of Zhao’s filmmaking and McDormand’s performance, both of which are strong enough to take it. On top of that, at times the film arguably slips into genuine documentary: most of the supporting cast are real people, playing themselves or versions thereof, so when these people Fern encounters tell their stories, it not only feels real, it is real. There’s a lot of sadness — in the events that have brought people to this place, and in the struggle to live this lifestyle — but a lot of happiness in what it’s given them, too. The net result is a dignified, deeply humane portrait of people who we might describe with negative words like “homeless” or “dispossessed”, but who in reality are free, in their way. It makes for a powerful, quietly moving experience.

Moments of beauty abound. Some of the places Fern visits, the scenery we get to see, are incredible. At times it feels like the film should have been shot in a taller aspect ratio. That’s partly expectations of a modern indie movie (this is the kind of film many filmmakers would opt for unmatted 16:9, or even self-consciously-old-fashioned 4:3), but also because it’s so focused on people and faces, and on small environments like the back of vans, for which a squarer ratio feels more apt. But when we reach the scenery — the wide open environs with distant horizons — the only appropriate choice is ’Scope. I bet those parts look incredible on the big screen. That there was an IMAX release felt daft when I first heard of it, but seeing those vistas, it seems justified. But it’s not just visual prettiness: when it turns out that one character has just months to live, she shares memories of stunning moments from her life, and it plays like a grounded version of Blade Runner’s “tears in rain” speech, conjuring up real (rather than fantastical) sights. The truth of it makes it just as emotionally affecting, at least.

While it was the real people who stuck with me, for others, McDormand’s performance was the big takeaway. Some have even called it career-defining. I’m not sure about that. I don’t think she’s bad in it, by any means, but I do think she spends a lot of it being quite blank; someone for us to follow, virtually a silent audience avatar, as we hear from and about other people. Only occasionally do we get to see anything of Fern herself. If the rest of McDormand’s career was unremarkable, sure, this would be a standout role; but when you’ve got iconic turns like Fargo and Three Billboards under your belt, I’m not sure this — judged purely as a character and performance — is wholly on the same level. I doesn’t make Nomadland any less of a film, just that if you really want to see what McDormand can do as an actress, I’d say look to one of those earlier films.

Talking of crazy assertions, some have floated the idea that Nomadland is a Western. Surely not? Well, it’s an interesting facet to consider, at least. In one scene, a character explicitly draws a link between today’s nomads and the pioneers of the Old West. They’re not necessarily wrong: these are individuals trying to create a new kind of life in an untamed landscape. If nothing else, there’s a definite parallel there. It could seem like a pretentious, self-mythologising viewpoint, but the fact it comes from an outsider (Fern’s sister, who lives a regular suburban life), rather than one of the nomads bigging themselves up, lends it more credence for me. But even if these nomads are like the pioneers, that doesn’t necessarily mean a film about them falls within the same genre. It might make an interesting point for future study, though.

From what I’d seen and read in advance, I worried that I might find Nomadland a bit boring and “not my kind of thing”. For people who don’t watch this kind of film — who are more used to the regular “narrative fiction” style of cinema — I do think it helps not to approach it like a normal movie (even thought it is, technically, still a narrative fiction). If you’re expecting a clear storyline and character arcs and dialogue and whatnot, that’s not what you’re going to get. It’s more like a travelogue; almost like one of those TV documentaries where a celebrity presenter visits places worth seeing. You watch to appreciate the scenery, the places, meeting the people, experiencing a way of life; not to follow a story or character arc in the traditional sense. It’s almost a film to hang out in, or to escape with — to get away from ordinary life and spend time with these captivating, unusual places and people.

In the UK, Nomadland will be available on Disney+ from tomorrow, Friday 30th April, and is expected to screen in cinemas when they reopen.