When it was announced a couple of years ago that Sony were developing an animated Spider-Man movie, there was, I think, some confusion about what they were playing at. The live-action movies were continuing, so this wasn’t a replacement. Was it connected? If so, why was it animated? If not, why did it exist? What was the point? Besides the obvious, anyway (popular brand + movie = money). Maybe Sony were just ahead of the game: where previously only one actor or series took on the mantle of a character at any one time, we’re increasingly in a world where multiple screen versions can exist simultaneously. Not that this film focuses on the same Spider-Man as the other ones…

Into the Spider-Verse begins by introducing us to… Peter Parker. Well, of course it does — he’s Spider-Man, right? But after a witty do-over of his backstory (second only to Batman’s in terms of the number of times we’ve seen it adapted, I should think), focus shifts to one Miles Morales (Shameik Moore), a Brooklyn teenager struggling to fit in at his new private boarding school and deal with the pressure put on him by his police officer father. Escaping school one night to hang out with his Uncle Aaron (Mahershala Ali), Miles gets bitten by a genetically-modified spider and… well, you know the rest, more or less. But Miles has more than just new powers to contend with: evil scientists have created a machine to open a doorway to other dimensions (who they are and why they’re doing it, I’ll leave for the movie to reveal). But the malfunctioning machine is likely to rip the universe apart, and it falls to Miles to stop it. Fortunately, the dimensional instability means a whole host of alternate-universe Spider-People show up to help him.

It’s bold to do a team-up movie with a whole host of characters we’ve never met before — it’s something DC were criticised for with Justice League as soon as it was announced, and we were actually introduced to half of that team before the team-up happened. Well, Spider-Verse isn’t really a team-up movie in the Avengers Assemble sense. This is Miles’ movie; the other heroes are a supporting cast. This is the kind of thing that goes on all the time in comic books — heroes popping up for cameos or supporting roles in other heroes’ books — and, of course, something Marvel have increasingly brought to the screen in the MCU. Spider-Verse handles its big cast smartly, both in terms of how much screen time they get, but also how they’re introduced. Comic books will often have a cameo occur assuming you know who that character is and why they’re significant, and if you’re not an avid fan this can be confusing. Spider-Verse is a bit smarter. Brand-new characters get a solid introduction, but there are others certain others who pop in with the assumption you’ll know who they are — and, considering we’ve had over 15 years of immensely-popular Spider-Man movies, you probably do. This isn’t really a film aimed at total newcomers to Spider-Man’s world, though you’d probably get by if you are.

That’s just one way in which Spider-Verse is perhaps the most comic-book-y comic book movie ever made. Another is the animation style, which works overtime to evoke comic books of old, while still being suitably modern and detailed. To describe the minutiae of all the little visual tricks and treats going on would take paragraphs and, frankly, get a bit dull — they’re interesting to watch, but not so much to read about spelled out in prose. Suffice to say the cumulative effect is certainly unique. Whether it always works… well, there were times I worried I’d actually wandered into a 3D screening and not brought any glasses, let’s put it that way. (I hadn’t.) But while it might take some getting used to, ultimately I really liked it. 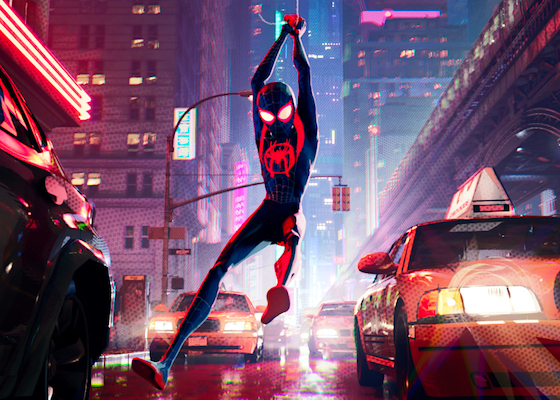 Indeed, that could be said of the film as a whole. Having heard a lot of advance hype from critics and preview screenings, Spider-Verse comes laden with expectation. Some earlier parts of the film play out a broadly standard superhero origin story, and, while it’s by no means bad, it doesn’t necessarily feel exceptional. But as more characters and concepts are introduced, and the film begins to pay off what it’s been setting up, it really comes together. It culminates in a powerful message — underlined by a closing quote from the great Stan Lee himself — that’s especially pertinent in the current climate of media criticism, which seems to see most people pushing for greater diversity of representation and artistic voices, while a vocal minority push back with thin “I’m not a racist but” arguments. Spider-Verse has an inclusivity at its core that is well balanced: if you want to shut out any messages and just enjoy a bunch of super-powered people engaging in hyper-kinetic action sequences, it can scratch that itch; but it demonstrates its core values, only stating them in summation at the end, rather than preaching them.

So it turns out that, yeah, Into the Spider-Verse lives up to the hype, if you give it the time to get there. It’s a movie that will satisfy comic book fans in particular, I think, but also anyone who enjoys animation as an artform. This isn’t your standard Disney/Pixar/Illumination/etc fare, but a thrillingly-realised vision of what animation can do.

Spider-Man: Into the Spider-Verse is officially released in the UK today and the US on Friday.