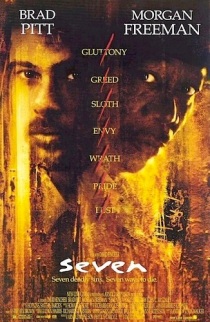 I usually say that Se7en is my favourite film.

I don’t know if it’s just a recent thing, but with the proliferation of online “profiles” thanks to Facebook and, long before that, forums and various other websites*, it feels like we’re asked such questions on a regular basis these days, never mind as a go-to topic when conversation is struggling. So when people or websites inevitably ask what is your favourite film, they expect you to have one. I don’t think they like it if you begin to list 20, or 30, or… So I say Se7en.

This once led to me doing a presentation on the film; specifically, on Andrew Kevin Walker’s screenplay. It went quite well and I was going to use the notes as the basis for at least some of this review — I’m sure there was something interesting in them. I even listened to one of the commentaries (it has four) to glean extra info (in over a decade of buying DVDs now, I’ve only listened to about ten commentaries). Unfortunately the notes are lost to a harddrive buried deep in a box somewhere, or a hardcopy buried deep in old notes goodness knows where, so that’ll have to wait for another day. I just wanted you to know you were missing out. (Don’t get too upset — I’m sure it wasn’t that good.)

As with almost all films I love, be they ones I’ve held dear for years or newly discovered as part of 100 Films’ primary thread, I’m not sure where to begin praising it. Perhaps the cinematography, an aspect Fincher put a lot of work into both originally and then again to make it look right on the DVD re-release. This may well be because the film is incredibly dark. 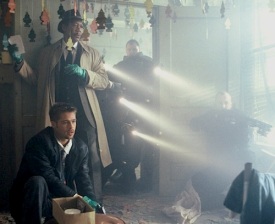 Black seems to be its default position — everything else is cut out of the darkness with as little light as possible. Often backgrounds and locations are better lit than foregrounds or actors, making the viewer focus on silhouettes with minimal light offering splashes of detail. Even the scenes that occur at daytime (most, anyway) do so in the middle of ferocious, ceaseless rain that ensures it never gets too bright.

It’s only appropriate, because the story is pretty much as black as they come. For those who’ve made it this far without finding out, Se7en concerns the police investigation into a series of murders themed around the seven deadly sins. In case you haven’t seen it, I shan’t outline any examples, but none are pretty. The worst, in my opinion, is Lust. However many times you see the film, that segment doesn’t get any easier to watch. It’s a three-way combination of an incredible, haunting performance by Leland Orser (in just one short scene); a photograph of the implement, which we see for mere seconds; and the moment when the film that was prepared to show us the ‘living corpse’ of Sloth victim Victor refuses to show us a body. Since the last time I watched Se7en I have seen 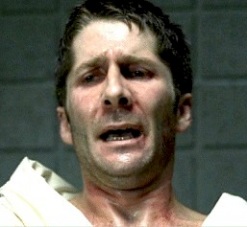 all but one of the Saw films, the uncut Witchfinder General, and various other gory horrors like Flesh for Frankenstein, but none are as gruesomely affecting as the Lust crime.

I imagine it’s contextual. Se7en is, in its way, quite heavily stylised — “dark”, as I discussed — but it’s done so in a very grounded way. To get film studies-y about it, we are asked to believe this is the real world and a plausible series of events are occurring in it. Films like the Saw series, however, clearly exist in a horror movie version of the world (however much some of the filmmakers may be under the impression that it’s a series of grounded thrillers). You view Saw with a horror movie mindset, expecting extreme situations and extreme special effects-driven gore; Se7en, even with its cruel and unusual murders, is always a police thriller. The frame of reference — plus the quality of writing, direction and acting — is what makes Lust so much more affecting.

The acting is brilliant, subtler than some might expect or be aware of initially. To take one example, look at the scene in the bar that (coincidentally) follows Lust. Detectives Mills (Brad Pitt) and Somerset (Morgan Freeman) discuss, more-or-less, Somerset’s reasons for retiring. He sets out his stall, his thoughts and reasons, well rehearsed from telling others and himself. 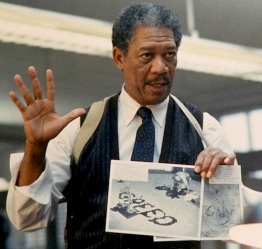 Mills delivers his riposte with greater hyperbole — of course, because that’s the character — perhaps bedded in a form of naivety and idealism, ending with a repetitious “I do not agree. I do not.” Then we see Freeman’s face, completely static, but you can read in it everything you need to — his anger at Mills for making him realise that it’s all a lie he’s been telling himself, and anger at himself for believing the lie. That’s one scene; Freeman is incredible throughout.

For all the darkness, there’s also a nice vein of humour. Not too much, not a desperate attempt to compensate, but a well-judged amount. One of my favourite comic moments in any serious film (“this isn’t even my desk”); the vibrating home; “if I shaved off a nipple…” From an objective point of view it helps us believe in and, more importantly, like the characters. Which is, really, all in aid of one thing:

The famous ending. It’s a twist, yes, but it’s more than that; and it’s mainly the performances that sell it. The twist, first, is perfectly played. We never see what’s in the box; we’re never even told; but we absolutely, positively, unquestionably know what’s in there, as surely as if we were Somerset seeing it with his own eyes. Even once you know what’s coming, though, it’s what follows the twist that’s incredible: three men in a field, three impeccable performances that bring everything we’ve spent two hours watching to a perfect head. 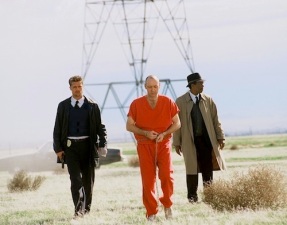 This is where liking the characters pays too, because we are on Somerset’s side and we’re on Mills’ side and we agree with both and disagree with both and don’t necessarily know who’s right or what to do or what we would do. I can spend the whole film anticipating this scene, knowing exactly what will happen in it, how great a piece of filmmaking it will be, yet it still makes my hair stand on end.

Some would claim that Se7en is no more than a standard murder thriller with a stock mismatched pair of detectives. In some respects they’re right, but in enough respects they’re wrong. There’s a killer high concept behind the crimes, for one thing, but it’s really the execution of the film, not the victims, that makes it so much more. It’s in the performances, the way those stock characters are written, their subplots, the story’s pace, the cinematography, the music, individual sequences like Somerset in the library or the climax that (arguably, of course) rise not only to the top of the genre but to the top of the very medium of film itself. There’s so much more; this review only scratches the surface. Se7en transcends its limitations in any one area by becoming far more than the sum of its exemplary parts. 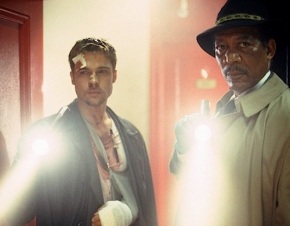 The quality of a crime thriller is often so tied to its mystery that the film can only sustain so many viewings — sometimes, only one — before you know it too well. I have seen Se7en at least seven times now, which for me is a lot — a helluva lot, even — and yet I still get something from it every time. That’s a rarity, that’s a reason to love it, and that is why it may well be my favourite film.

I watched Se7en as part of a David Fincher Week. Read my thoughts on all his films to date here.

* All these people who attribute such things to Facebook, usually in a critical way, are just a bit behind. (That’s a personal bugbear dealt with, then.) ^

New parcel just arrived from Down Under 😍
I’m a bit behind on the MCU, but skipping a couple of movies & several TV series to finally see what all the fuss was about with this’un.
Finally! 🥳
We think of the line blurring between TV and film as a recent thing, but back in the ‘70s they were re-editing episodes of The Persuaders for theatrical release… and now they’re on Blu-ray, thanks to @networkonair 😁