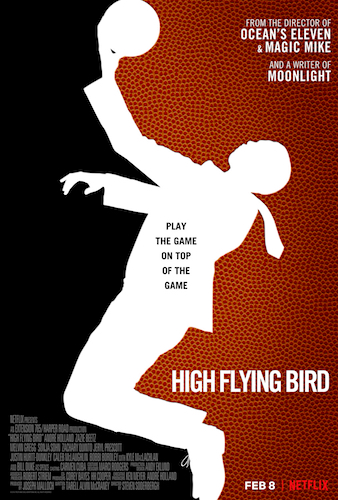 Steven Soderbergh’s ‘retirement’ continues with another shot-on-iPhone movie (following last year’s psychological thriller Unsane), this time going direct to Netflix. Whereas Unsane made a virtue of its iPhone cinematography to heighten a disquieting, untrustworthy atmosphere, High Flying Bird forges ahead with no such baked-in excuse for its visual quality. However, similarly to Unsane, the fact it was shot on an iPhone is almost incidental, noteworthy mainly just because it’s unusual. But more on that later.

The movie is about Ray (André Holland), a basketball agent struggling to keep his players in check during a lockout… and already you’ve lost me, movie: I had to look up what a lockout is. I’m not much of a sports person, and I’m pretty sure we don’t have lockouts in British sports. Basically, best I can tell, it’s some kind of disagreement between the players (through their union) and the team owners, which results in games not being played when they should be, and people not being paid because nothing’s happening. So, it’s a bad thing, and it’s putting Ray in a bad situation — so he sets about trying to launch an “intriguing and controversial business opportunity”, to quote an IMDb plot summary.

Something like that, anyway. Frankly, it took less than two minutes for High Flying Bird to leave me feeling lost and confused, as it dives into an “inside baseball” (as the saying goes) depiction of basketball right from the off. It felt like watching a French movie without subtitles, except here the language isn’t French, it’s basketball. In fairness, I did eventually get a handle on what the overall plot was, but mostly with hindsight and not ’til quite far in — my analogy still stands for what the viewing experience was like until that point. 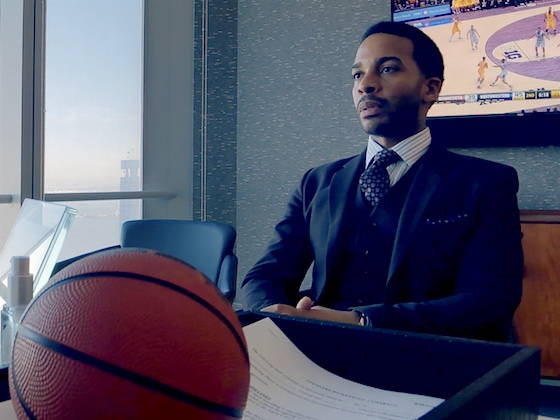 For fans of basketball, or at least those with some kind of knowledge of the workings of the business side of American sport, it might all be more palatable. I think there’s some good stuff in the plot and characters, but I can only say “think” because I made such a lousy fist of following what was meant to be going on half the time. The story culminates in a final twist/reveal about Ray’s actual plan. Fortunately, by that point I’d worked out (more or less) what events had happened, so I followed it — indeed, I got there ahead of it. Well, that’s because before viewing I read a comment which implied this was a heist movie (like Soderbergh’s previous work on the Oceans films or Logan Lucky), so I’d already been on the lookout for what the real con was. Nonetheless, I’m torn between whether the reveal was quite clever, or the film thinks it’s cleverer than it actually is. If I hadn’t had that heads up, maybe I would’ve been as mind-blowingly impressed as Ray’s boss seems to be when Ray reveals the real plan to him. Or maybe I wouldn’t’ve, who can say.

Unsane suggested you couldn’t make a good-looking film on an iPhone. High Flying Bird says, actually, you can. It doesn’t all look great (especially when, for example, the shot literally wobbles from something as simple as someone putting a drinks bottle down on a table), but there are some beautiful shots in here too. Unsane almost had to make a virtue of its odd look, the weirdass visuals chiming with the story of a possibly unstable mind. High Flying Bird has no such excuses, and most of the time it doesn’t need them; though some parts do still look like a first-effort student film, which is very odd coming from a director as experienced as Soderbergh (this is the 56-year-old’s 29th feature, not to mention his 39 episodes of TV).

While researching the film’s production I came across this interesting article at The Ringer, which uses High Flying Bird as a jumping off point to examine the history, increase, and future of using iPhones for professional projects. It basically contends that phone-shot films are the future for everything, and makes that sound reasonable. It’s reminiscent of the emergence of digital photography for movies: it was a big story back when Soderbergh shot Che with digital cameras (Criterion’s Blu-ray release has a half-hour documentary dedicated to it), but it was only a couple of years later that became standard for all major movies, and a few years after that it’s now noteworthy when something is actually shot on film. It seems inconceivable that one day they’ll be shooting an Avengers movie on a phone, but then it once seemed inconceivable you’d shoot a movie that big on digital video…

It’s quite hard for me to give a concise opinion of High Flying Bird. I struggled through much of it, which made for an unpleasant viewing experience. But I acknowledge some of that lies with me knowing less about basketball than the film does. But then again, is it the film’s responsibility to explain to me the things I don’t know? I did get a handle on events by the end, and if I watched the film again I expect I’d follow it better, but I also don’t feel there’s much luring me back for a second viewing. 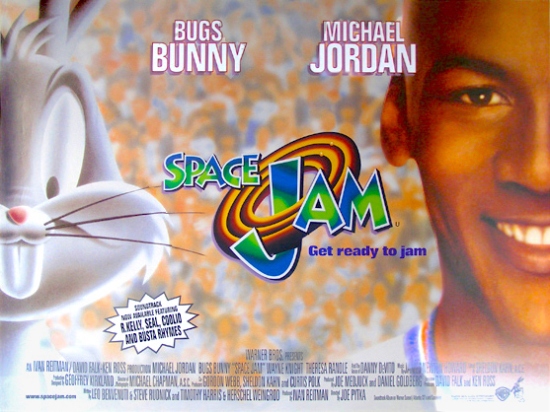 Space Jam is one of those movies that everyone of my generation seems to have seen, and many of them have fond childhood memories of it too. I remember when it came out. I pretty thoroughly dismissed it at the time, because I had no interest in basketball (partly because I’m British — I was baffled anyone else over here cared at all), and not much more interest in the Looney Tunes characters either, to be honest. Plus it just looked silly. And not in a good way. But, as I say, everyone else seems to have seen it, so I thought “why not?” and taped it off the telly one day. (Well, I didn’t tape it — no one uses tape anymore, do they? Recorded it. DVR’d it. TiVo’d it. Whatevs.) Then, one night when my critical faculties were feeling like they didn’t want to be challenged with anything too worthy of my time, I decided to bung it on — and learnt that I was right in the first place.

For those who’ve managed to avoid awareness of this movie, it stars Michael Jordan as Michael Jordan, the basketball player, who ends up being recruited by Bugs Bunny and co to teach them how to play basketball so they can beat a group of aliens who want to kidnap them. I would say “it makes sense in the film”, but it doesn’t make much more sense. 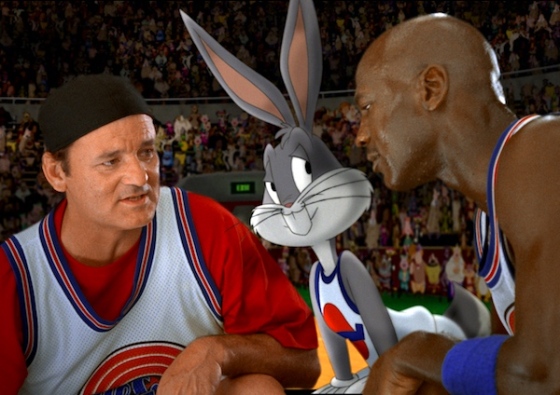 A plausible plot is not a prerequisite for an entertaining kids’ movie, but Space Jam provides nothing in its place. It is joyless. Not funny. Not clever. It’s just flat. The concept of character is nonexistent — no one has an arc. It wastes time on a subplot about a bunch of players who aren’t Michael Jordan. (I say “wastes time” — the whole thing’s a waste of time.) Bill Murray turns up for no apparent reason — did he need the money? Does he really love basketball? I don’t know. He brings some small joy just by being him. Elsewhere, there’s a grand total of one funny line.

Even on a technical level, the animation and live-action interaction isn’t all that good. So much of it is obviously just Michael Jordan on a green screen, looking around himself at thin air which some animators filled in. It’s perhaps a little smoother around the edges than Roger Rabbit (which was released eight years earlier), but it lacks that film’s class and tactile sense that the live-action and animation are genuinely interacting, which is more important than computer-aided precision.

You may have seen earlier this week that a list was released of “Must See Movies Before You Grow Up”, aiming to list the 50 films every child should see by the age of 11. Space Jam was on it. So was Home. Over half the list came from this millennium, a third from the past seven years. There’s lots of good stuff on there but, yeah, I think I’m going to ignore it. Like I suggest you should ignore Space Jam.

Space Jam featured on my list of The Five Worst Films I Saw For the First Time in 2017, which can be read in full here.