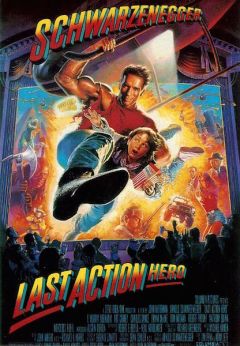 The first film to be advertised in space (no, really) sees movie-obsessed schoolboy Danny (Austin O’Brien) acquire a golden ticket that transports him into the latest movie staring his favourite action hero, Jack Slater (Arnold Schwarzenegger). With Danny’s knowledge of the genre’s clichés, Slater can solve the murder of his favourite second cousin and stop the machinations of sharpshooting henchman Benedict (Charles Dance).

Last Action Hero is effectively a spoof of action-thrillers, albeit with a real-world framing device instead of just leaping in Airplane-style. That has distinct pros and cons. In the former’s camp, the film is most alive in the first and third acts, when the two worlds initially collide and, later, when the fictional characters enter our world only to find that not everything’s the same as in the movies.

The downside is that the bulk of the middle is set in movie-world, and it’s simply too long to spend there. The film that Danny jumps in to, Jack Slater IV, deliberately has a highly generic action-thriller plot… but that means Last Action Hero plays like one too. There’s fun stuff centred around Danny’s “impossible” knowledge of what’s going on, as well as a playfulness with genre conventions, but it quickly runs out of ways to be unique, and we’re left having to sit through a terribly rote story with flashes of humour. 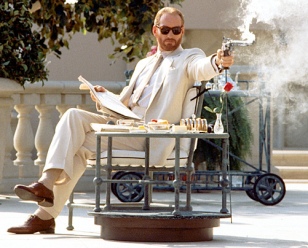 That said, it’s probably a good thing this isn’t a whole movie of “fictional characters in the real world” — you can imagine how that would play out; all the predictable “fish out of water” hijinks. However, at just over two hours, this isn’t a short film, and cutting out some of the middle wouldn’t have hurt.

It’s also a shame it ended up with a 15 certificate over here. It’s very much a PG-13 movie — it’s got that almost-kid-friendly tone, not to mention the pre-teen protagonist. These days it would surely get a 12A, even if changes were needed. I’d argue the disjunct between certificate-based expectations and the reality of the film accounted for some of its poor reception… but as it was a PG-13 in the US and went down badly there too, who knows.

Still, there are many memorable moments, like the (in)famous Arnie-in-Hamlet sequence, and Dance makes for an excellent adversary, both humorous and genuinely villainous. Although it could benefit from numerous tweaks across the board, there’s actually an awful lot to enjoy here, even if the highlights are mainly for fans of the specific genre it’s so accurately spoofing.