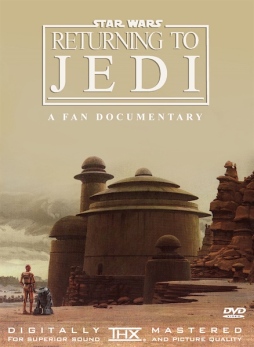 Returning to Jedi completes fan/editor Jamie Benning’s trilogy of documentaries about the original Star Wars trilogy with a look at the making of… well, obviously. In case you’ve forgotten, Benning’s “filmumentaries” are most succinctly summarised by the documentary’s own introduction:

Returning to Jedi is an unofficial commentary. It contains video, audio and information from over one hundred sources taking you deep into the making of Return of the Jedi.

I’m not entirely sure why, but it felt to me that this might be the best of all Benning’s Star Wars filmumentaries (he’s also completed ones for Jaws and Raiders of the Lost Ark). It’s not that anything’s drastically different (the format works), it’s just a certain something that made it the most engrossing. Perhaps there was more material to work with — the result is something like 20 minutes longer than Jedi itself, and a good ten minutes longer than the other Star Wars filmumentaries. Doesn’t sound so much when put like that, so maybe I’m making a spurious correlation.

There’s certainly tonnes of behind-the-scenes footage in this one, more so than the other two. Much of it concentrates on the creation of the special effects, as usual, with particular attention paid to Jabba, the Rancor, and the speederbike chase. As all are noteworthy achievements in effects work, they merit the focus. Audio snippets from various interviews down the years provide some more varied detail. There’s a fair bit of information on variations to the story that were considered and rejected, though it does make it sound like Lawrence Kasdan was desperate to kill someone off: he kept suggesting the likes of Han, Lando, and even Luke should make the ultimate sacrifice, while Lucas maintained no one should die. Kasdan wasn’t alone — Harrison Ford also thought Solo should die,

and Mark Hamill expected more darkness for Luke — but I guess they weren’t to be heard by an increasingly autocratic Lucas (reports of him essentially directing Jedi for Richard Marquand, or of his clash with the Directors’ Guild that prevented Steven Spielberg from directing the film, go unmentioned here).

Highlights include: a look at the set for Jabba’s sail barge and the Sarlacc pit, an enormous raised construction in the Arizona desert that looks incredible; the fact that they consulted a child psychologist, who told them under 12s would think Vader being Luke’s father was a lie unless it was unequivocally stated, hence the scene where Yoda does just that; and a selection of interesting deleted scenes. The wisest deletion was an early scene of Luke building his new saber and hiding it in R2-D2 — how much would that undermine the reveal that Luke had a plan all along? — though also of note are a sandstorm before they leave Tatooine (deleted for pace) and a full-on shoot-out as Han and co enter the bunker on Endor.

Whether Returning to Jedi is the best of Benning’s work or not is neither here nor there, really. Although their length and the fact they sometimes focus on minutiae probably rules them out for the casual observer, who might prefer a shorter making-of overview if they’re even interested, his trilogy of Star Wars filmumentaries are consistently fascinating for fans.

Returning to Jedi can be watched on Vimeo here.

Star Wars: The Force Awakens is released in the UK at midnight tonight, and in the US on Friday. It will be reviewed at a future date. (Possibly Christmas Day. We’ll see.)

The first of Jamie Benning’s “filmumentaries” looks at the making of sometime Best Film Ever, and widely-accepted Best Star Wars Ever, The Empire Strikes Back (as it used to just be known). To quote the documentary’s own intro:

Building Empire is an unofficial commentary to The Empire Strikes Back. It contains video clips, audio from cast and crew, alternate angles, reconstructed scenes, text facts and insights into the development and creation of the film.

It begins with director Irvin Kershner explaining how he came to be involved, though my main observation was how much he sounds like Yoda. Maybe that’s just me…

From there, there’s a focus on the special effects and how they were achieved. There’s a lot of detail about the myriad effects on Hoth, the creation of the asteroid field, and the puppetry of Yoda, as well as boundless trivia, like detailing the set-extension matte paintings. Other major themes include changes from early drafts and in deleted material; audio differences between the many different versions (not only the various release prints and Special Editions, but audiobooks and the like); commentary from actors on the evolution of their characters; plus detail on the actual filming, including the terrible weather on location in Norway (they were able to shoot some of Hoth’s desolate ice fields within feet of their hotel) and the rigours of the Luke/Vader lightsaber duel. 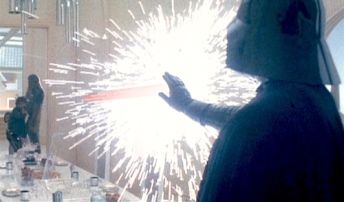 My personal highlight of the documentary comes in Cloud City, at the point Lando’s betrayal is revealed. Benning inserts a “deconstruction of an action scene” (Han shooting at Vader; Vader Force-stealing Han’s gun), using uncut footage and B-roll to quickly glimpse how such things are achieved — or were, before “with CGI” was the answer for everything. Here, Benning’s work transcends merely placing rare interviews or behind-the-scenes footage at the appropriate juncture, instead using that material to create something genuinely new and insightful.

Assuming you’re interested in snippets of minutiae and amusing trivia (if not, these filmumentaries definitely aren’t for you), the downsides are few. It’s a shame that, just occasionally, there are stretches with no additional material (though never for long) when at other times the additions race by in a blink-and-you’ll-miss-it flash. There are also quite a few instances labelled “restored music”, but there’s no comment from John Williams, Kershner, or anyone else on why so much was removed and/or changed. 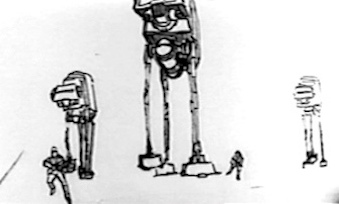 Niggles aside, I felt like I enjoyed Building Empire even more than its later predecessor (how very Lucas). I’m not saying it’s fundamentally better — just as with Star Wars Begins, for those who love making-of details and trivia, Building Empire is a delightful grab bag of such bits and pieces.

Building Empire can be watched on Vimeo here.

Star Wars: The Force Awakens is released in the UK this Thursday, and in the US on Friday.

This year, I finally got round to watching the Star Wars Blu-rays I bought back whenever they came out, so I thought what better time to also finally watch Jamie Benning’s trilogy of “filmumentaries”. What’s a filmumentary, you ask? Well, here’s the opening text of the film itself:

Star Wars Begins is an unofficial commentary on Star Wars. It contains video clips, audio from the cast and crew, alternate angles, bloopers, text facts and insights into the development and creation of the film.

For those familiar with (Warner) Blu-rays, it’s essentially a fan-made Maximum Movie Mode, though drawing on a wealth of archive resources rather than newly-recorded material. In practice, it plays less like a cohesive “making of” and more like a trivia track on steroids. Only rarely do we learn something fundamental; mostly it’s interesting titbits. But then, this is a documentary made by a fan for fans, and fans love minutiae. Consequently, it sometimes comes from a place of deep fan-ish-ness. For example, it refers to and uses clips from the “Lost Cut”, but never bothers to define or explain what that is (or if it did, I blinked and missed it). Conversely, it occasionally transcends “Star Wars trivia” to unveil general “moviemaking trivia” — how different on-set audio sounds to the final mix; demonstrations of how editing can affect the flow and pace of a scene; and so on.

Perhaps the highlight are some early deleted scenes. Featuring Luke, Biggs and their friends on Tatooine, and placed to intercut with the droids’ progress and Vader’s search for them

(i.e. before we even meet Luke in the finished film), the sequences were removed en masse due to execs’ fears they made the movie feel like “American Graffiti in space”. And for once, an exec was right! They give the movie a completely different tone; more grounded and less mythic. Thank goodness they were done away with, to be honest.

Another personal highlight was a snippet from a 1978 interview with Harrison Ford, in which the Han Solo actor says Star Wars is not science fiction, it’s science fantasy. He’s bang on the money — it’s a distinction I subscribe to wholeheartedly. I’d always thought it was a more recent argument, but there he is expressing it right after the film came out, not as some decades-later revisionism.

This is actually the third of Benning’s filmumentaries — he started with Empire and followed it with Jedi, only then going back to where it all began. Maybe there’s a reason for that. Maybe a greater behind-the-scenes scrutiny on the sequels gave him more to work with, producing more in-depth making-ofs, and when he went back to the first he just had to work with what he could find. Or maybe the disjointed trivia grab bag is his style, and here it reaches its apogee. I guess I’ll find out soon enough.

Star Wars Begins may not be the first port of call for anyone looking for an overview of the making of Star Wars, but it’s a goldmine of behind-the-scenes titbits and occasional candid revelations for anyone with a strong enough interest.

Star Wars Begins can be watched on Vimeo here.

Star Wars: The Force Awakens is released in the UK this Thursday, and in the US on Friday. 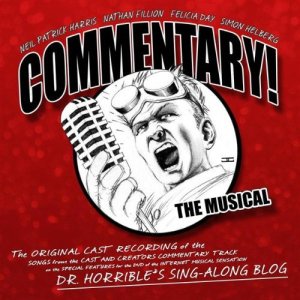 Commentary! The Musical falls somewhere between DVD extra, TV episode and short film. Whatever it should be classed as, it’s utter genius.

You’ve surely heard of Dr. Horrible’s Sing-Along Blog, the project Joss Whedon created during the infamous US Writers’ Strike. (That in itself you could debate the status of. Three-part miniseries? Short film? Feature film? (At 42 minutes it’s over the Academy’s boundary.) And endlessly on.) Well, on the Dr. Horrible DVD can be found this — an alternate audio track, on which the cast and crew discuss the making of the feature… except it’s all scripted and the majority is sung. Not your traditional audio commentary then.

As an audio commentary, it does little to illuminate the production of Dr Horrible — though, surprisingly, it does do some — but instead focuses its energy on spoofing commentary tracks, DVD extras, and the American film and TV industry in general. Specific targets include the Writers’ Strike and its lack of success, rivalry between lead actors, the importance of ensemble cast members, Asians in US TV and film, the dissection of art by DVD extras, and many more. It’s almost all incredibly funny — inevitably there are a few duff gags and dull songs, although they are uncommonly rare — and it moves at a rate of knots, meaning it rewards multiple listens to pick up every gag. Having already re-listened to a couple of tracks, I can attest to noticing funny lines that I was too busy laughing through before. In a spot of technical impressiveness, the commentary is often surprisingly scene-specific, sometimes even shot-specific. When you consider the effort that must’ve been involved to script and time both songs and spoken dialogue to make this happen, it’s even more impressive.

It’s this careful scripting and the sure-handed attentiveness to theme that marks Commentary! The Musical out as a fictional work in its own right, rather than ‘merely’ a DVD extra, in much the same way that Mystery Science Theater 3000 or the short-lived (and easily forgotten) Rob Brydon series Director’s Commentary are original works. With its well-targeted thematically-appropriate comedy and plentiful gags, it’s pure delight for fans of DVDs, or anyone else with a mind open to the concept.