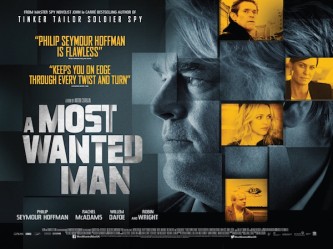 John le Carré adaptation starring Philip Seymour Hoffman as a German secret intelligence operative who must battle internal politicking while tracking a political refugee who may actually be a terrorist.

A typically complex plot requires the viewer to keep their attention level high. Some find the story a plod, but (one languorous interrogation sequence aside) I thought it relatively brisk, aided by accent-defying performances from Hoffman, Willem Dafoe, Robin Wright, Rachel McAdams, and Grigoriy Dobrygin as the refugee. Though beware: its level of realism, with real-life levels of compromise and betrayal, doesn’t make for an ultimately cheery or triumphant conclusion.