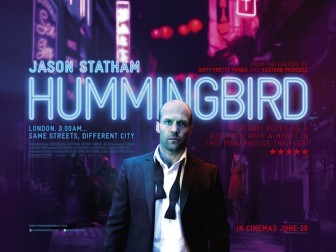 Steven Knight, the writer of Eastern Promises and Peaky Blinders — and, latterly, writer-director of “Tom Hardy driving on the phone” thriller Locke — made his directorial debut with this Jason Statham thriller that isn’t.

The Stath plays Joey, a soldier who did something terrible in Afghanistan that landed him in a mental health unit in London awaiting court martial, from which he escapes into homelessness. Running from some attackers, he stumbles into a plush flat that’s vacant for the summer. Using his ‘borrowed’ wealth, he strikes up a friendship with Cristina (Agata Buzek), the nun who runs his old soup kitchen, gets a job with Chinese gangsters, and sets about finding out what happened to his friend from the street.

Outlined as just a plot, Hummingbird might sound like your standard Statham action-thriller. It really isn’t. Knight’s focus is primarily on the relationship between Joey and Cristina, two people who are both lost, struggling with events from their past, trying to help people, in search of something. It’s a bigger acting challenge than Statham usually has to face. To be honest, he’s probably not wholly up to the task, but he makes a good fist of it. Buzek has a more striking arc, in some respects, and navigates it subtly but successfully. The crime storyline, in particular Joey’s investigations into the fate of his friend, are a frame on which to hang the development of these people.

The film’s problem, perhaps, is that it slips a little between two stools. It’s certainly not action-packed enough to appeal to a good deal of Statham’s fanbase — the one or two instances of him kicking ass are very much asides. On the flipside, it may not commit to the character drama fully enough to satiate the needs of that kind of viewer. However, for anyone at peace with those two apparently-disparate styles — like, well, me — Hummingbird will be a more satisfying experience.