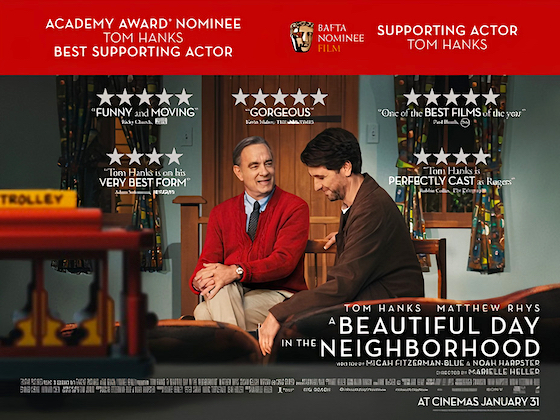 Thanks to the ubiquity of their films and television programmes, American culture permeates the world. Even if something isn’t directly exported, there are enough references to it in other media that we all get to know it by osmosis. (If you think I’m exaggerating, here’s one example: there are many documented cases of people trying to “plead the fifth” when being interviewed by law enforcement in countries where the fifth amendment to their constitution has nothing to do with criminal procedure.) So, it’s all the more unusual that Mr Rogers is apparently an influential part of American childhoods, but he wasn’t (as far as I’m aware) widely known outside of the US until a couple of years ago. That was thanks to the acclaim garnered by documentary Won’t You Be My Neighbor? As these things often go, that was followed by a biopic — which is this.

However, rather than try to tell Mr Rogers’ whole life story, A Beautiful Day in the Neighborhood (a reference to the fictional land in his TV series, which is presumably why the US spelling was retained even for the UK release (except on DVD covers, etc)) focuses on one man’s encounter with Rogers. That man is Lloyd Vogel (Matthew Rhys), a cynical journalist with familial problems aplenty. He’s assigned to write a puff piece on Rogers — a couple of hundred words for a magazine issue about “heroes”. The pair seem an ill fit, but that’s the point — it’s basically a punishment from his long-suffering, usually-indulgent editor. Lloyd is initially reluctant, then sceptical — surely the whole “Mr Rogers” thing is a persona; an act? But as he spends more time with the man, it begins to change his view on the world too.

Okay, it probably takes a while for the film to get to that point, exactly, but I’m not spoiling anything — you know that’s where it’s going. “I met this guy whose world view was so much more positive and optimistic than mine… and it didn’t affect me at all, I’m still a grumpy bastard.” That’s not a story Hollywood’s going to tell, is it? Heck, that’s not even a story. So, yeah, of course Mr Rogers’ fundamentally decent and kindly nature is going to have an impact on Lloyd. 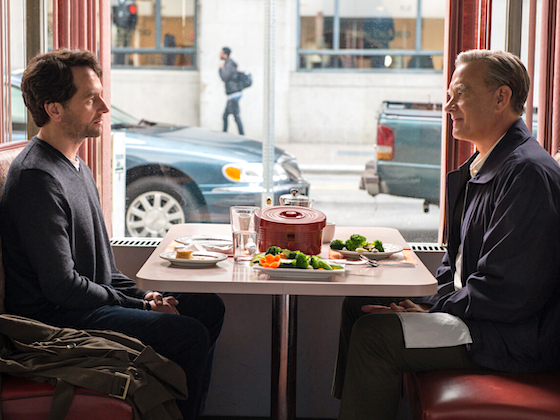 Despite Mr Rogers being the focal point, then, the film is really more about Lloyd’s personal journey. But that journey is instigated and facilitated by Mr Rogers, so his “supporting character” part is vital. And who better to portray the very embodiment of decency than Tom Hanks? Rogers’ widow has said that Hanks was the perfect actor to play her husband; for his part, he’s said taking the role was “terrifying” due to the cultural significance. Hanks is as accomplished in the role as you’d expect, and it deservedly earnt his sixth acting Oscar nomination (his first in almost 20 years, and long overdue, I think).

If it all sounds a bit predictable, director Marielle Heller dodges that with some indie-movie-esque flourishes. There’s a touch of Wes Anderson to how she uses Mr Rogers’ TV show, switching into Academy ratio to demarcate us entering a different ‘world’ — not just literally clips from the show, but bookend narration, dream sequences, location transitions, and so on. IMDb lists the 1.33:1 ratio as just being used for “TV scenes”, but I think that undersells its use and effectiveness, which is more comparable to (say) how Anderson used three different ratios in The Grand Budapest Hotel.

Its those kind of inescapable but well-considered flourishes — plus the believable transition in Lloyd’s character, which is more grounded in reality than the “slightly unlikeable guy becomes super positive” cliché — that elevate A Beautiful Day in the Neighborhood out of the predictable or twee, and into being a genuinely heartwarming kinda film.

A Beautiful Day in the Neighbourhood is available on Sky Cinema and Now TV from today.