Superman: The Movie is one of the greatest superhero movies ever made, perhaps even the greatest. Its sequels… not so much.

It took three movies to get there, but through them you’ll believe a franchise can die…

I feel like I must’ve seen Superman II as a kid — I know I saw Superman and enjoyed it, so why wouldn’t I have seen the sequel? But all the things people go on about from it (“kneel before Zod!”) I only know because other people go on about them, not from any memory of my own, so maybe I never saw it? Well, sitting down to watch it now, I didn’t remember any part of it. But that doesn’t mean I definitely didn’t see it because, frankly, I didn’t find Superman II particularly worthy of being remembered. I know some people love it — heck, James Gunn even included it in a list of “sequels that are better than the original” the other day. But James Gunn is wrong.

For me, the film breaks down into a few simple and distinct sections. First, it begins with an eight-and-a-half-minute recap of the first movie. That’s… long. And largely unnecessary. I mean, when it bothers to include the telephone booth gag but omits the turning-the-world-backwards climax of the movie, you get the impression it’s not there to get you properly up to speed on the plot.

Next, Lois and Clark spend most of the first hour titting about at Niagara Falls investigating a honeymoon hotel scam (a what now?!), while evil Kryptonian General Zod and his gang veeery slooowly make their way to somewhere significant. Then there’s half-an-hour of Lois and Clark being too self-absorbed to notice Zod take over the world. Not-so-super, Superman. Then, finally, the all-action last half-hour actually gives us some Superman stuff. Hurrah!

The humour quotient is waaay upped from the first movie. Based on his previous work, I guess much of that was the influence of replacement director Richard Lester. He wasn’t a good choice all round: Margot Kidder disliked working with him; Gene Hackman didn’t return (all his scenes are either footage previously shot or done with a lookalike and impersonator); John Williams walked off the film after seeing Lester’s footage. He reshot a bunch of stuff original director Richard Donner had already filmed, partly to get a sole director credit, partly because he didn’t approve of the epic visual style Donner had chosen. Instead, Lester aimed for a visually flat “comic book” style. Ugh.

25 years after Superman II’s release, Warner Bros relented and let Donner complete his original cut of the movie, released in 2006 as The Richard Donner Cut. Maybe that version’s better — I haven’t watched it yet, but it does have a much higher score on IMDb. But how anyone could genuinely love the originally-released version, I don’t understand. It’s not outright bad, it’s just mediocre, and not a patch on its predecessor.

If you said “imagine a Superman film by a director who won the Palme d’Or”, you wouldn’t picture Superman: The Slapstick Comedy… and yet here we are.

The director in question is Richard Lester, returning after Superman II, a movie he inherited, so I guess it’s only here that he’s really allowed to show what he thinks a comic book movie ought to be. Turns out, that’s more like Airplane or a Jacques Tati film than the David Lean influence he felt Richard Donner was aiming for on Superman: The Movie. He even lets the title card appear over the epic superhero imagery of… three phone boxes that have been knocked over dominoes-style by a hot dog cart. Wow.

Ironically, almost all of the film is humour-focused apart from the scenes starring comedian Richard Pryor (who thought the screenplay was terrible, but did like the $5 million salary). Concurrently, the technological and scientific parts of the plot make absolutely no sense. Like, a weather monitoring satellite can be accessed from a small-town wheat firm and then be reprogrammed to control the weather. And that same satellite can then use its lasers to analyse rocks millions of miles away to find out what elements make up another element, which just… Ugh. It so doesn’t make sense that it’s too much effort to explain why it doesn’t make sense.

With Gene Hackman presumably only too happy to be rid of this franchise, the villain is now Robert Vaughn, who has an entourage that feels like a blatant attempt to emulate Lex Luther & co from the previous films. There’s also an all-powerful supercomputer, which Superman defeats with what appears to be a bubbling-over pot of strawberry jam. 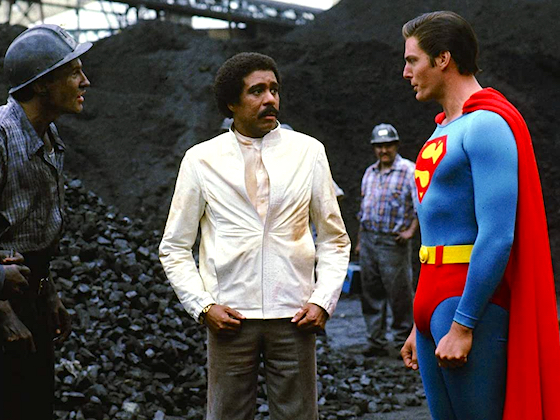 The story also involves Superman going bad — you can tell because he’s grown a five o’clock shadow, developed bags under his eyes, and started wearing a suit with a colour scheme more suited to a Zack Snyder interpretation of the character. And he begins to do really terrible things, like… straightening the leaning tower of Pisa, and… blowing out the Olympic flame. Ooh, edgy. Why does he do it? God, I don’t know. There’s no logic in this. There’s a fight between good Superman and bad Superman, which some think is brilliant; “a highlight of the series”, said one comment I read. Maybe it’s just because Evil Superman is so damn cartoonish, but I didn’t particularly care for it.

It did inspire the original title of the movie, though, which was Superman vs. Superman, and that in turn led to a bit of trivia more batshit insane than anything in the film itself: that original title was dropped after legal action was threatened by… the producers of Kramer vs. Kramer. What in the fucking what now?! I know America is famed for spurious lawsuits, but c’mon!

Of course, if you take the whole film at the face value of its tone, it doesn’t really matter — it’s just a daft comedy. But it shouldn’t be, should it? This isn’t the Superman the first film promised us.

At one point in this movie, a young character calls Superman “the Dude of Steel”. Yeah, we’re down with the kids now! Superman (okay, Clark Kent) even does aerobics. Hip and happening!

After Superman III tried its damnedest to turn Superman into a comedy, Superman IV swings the other way and turns it into a polemic. It’s like an 8-year-old was asked to write an anti-nuclear weapons essay and chose to do it in the form of a Superman story. It seems like a mercy that it only runs 90 minutes, although that’s part of the problem: the original final cut was 134 minutes, but the producers chopped out 45 minutes of material. No wonder it grows increasingly nonsensical as it goes on. But then so did Superman III and they had no such excuse, so there’s no saying the longer cut would’ve been better.

Indeed, on the evidence of what’s left, I think we can assume it wouldn’t have been. Gene Hackman’s Lex Luthor is back (goodness knows how they talked him into it), but his plan involves creating a physical adversary for Superman: Nuclear Man! Nuclear Man has many of Supes’ powers and strengths, but none of his brains, as he stomps around just roaring at people. He flies around the world basically just being a vandal, and Superman follows along to clean up after him, like some kind of super-powered babysitter. Then he punches Supes once and… he loses all his powers? And then Nuclear Man sees a woman on a cover of a newspaper and suddenly getting her is his only motivation; and Superman’s back, thanks to a magic crystal, and he somehow knows exactly what/who Nuclear Man is after; and so Superman defeats him by… tricking him into an elevator… which he drops off on the Moon; but not the dark side, so the sun’s rays revitalise Nuclear Man… when the sun rises. On the Moon. Jesus wept.

There are some good ideas in Superman IV. As co-writer Mark Rosenthal discusses on his audio commentary, the idea had been to explore the age-old question of “if God is all-good and all-powerful, why is there still suffering” — because, with all his powers, Superman is basically a mythological God; so why doesn’t he just get rid of all those nasty nukes? The answer, of course, is that he’s not real. And so in the fictional world of the fictional film, the fictional hero gets rid of the nukes, which is nice for the fictional people but not so much use to the rest of us.

Because Lois Lane is in love with Superman but not so much Clark Kent, they decided to give Clark a love interest, which I’m not sure quite understands the characters or their dynamic properly, but whatever. It did inspire one fun idea, though: a double date between Superman & Lois and Clark & new-lady. The idea was for a quick-paced farce of a scene, with Clark and Supes coming and going at speed, like something out of a Cary Grant screwball romantic comedy. I guess no one told the director, because the scene as filmed lacks the fast pace needed to make it work. You can have all the great ideas in the world, but if you don’t have the skills to execute them properly, it’s worthless.

Apparently it was really Christopher Reeve who fought to make the movie happen, and everyone involved had good intentions and didn’t want to let him down. Well, they did. The returning cast are the only people who emerge unscathed from this mess — Reeve is as wonderful as ever as Superman; just perfect. His chemistry with Margot Kidder is great, and Gene Hackman is still managing to have fun as Lex. But why suffer through the rest of this terrible movie for those scant bright spots when you could just watch the first Superman instead?

Superman IV featured on my list of The Worst Films I Saw in 2020.

19 years later, after a couple of decades relegated to various TV incarnations, they attempted to return the Man of Steel to the silver screen in big-budget style with Superman Returns, which was conceived as a continuation of the Christopher Reeve series. My original review of that movie is here.