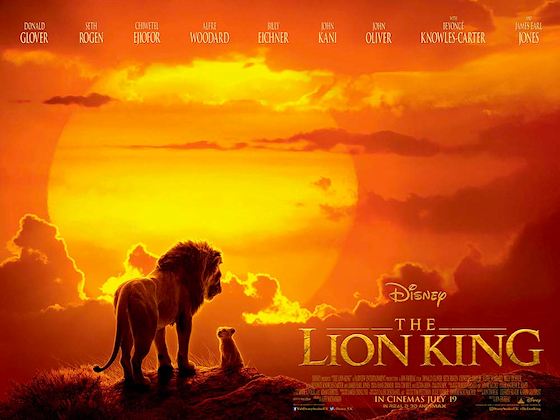 The Lion King might be the best Disney film. It’s that or Beauty and the Beast. (I’m sure many classicists would plump for something older, but sorry, I’m a ’90s kid.) (Also, by “Disney film” I mean their animated output. Obviously Disney release tonnes of other stuff, and have for a long time, but by “Disney film” we really mean the animations, don’t we? Not “any film that happens to be released by Disney”. I do, anyway. Especially in this context.)

Sorry, let me start again: The Lion King might be the best Disney film. So when they started down this road of live-action remakes of their beloved classics, it was inevitable their attention would turn to it. Of course, you can’t really do a live-action version of a film whose characters are all lions and hyenas and warthogs and stuff — not without going down the puppetry/costumes route of the stage version, anyhow, which apparently is gangbusters in the flesh (I’ve never seen it; that’s changing in August, Coronavirus permitting) but I can’t envisage working for the mass moviegoing audience. So instead they did the obvious thing and went for photo-real CGI. Heck, most “live-action” blockbusters nowadays are 50%+ CGI anyway, especially Disney ones (they didn’t even design the Avengers’ costumes for Endgame until post-production, ffs). But, at the end of the day, “photo-real CGI” is just another kind of animation. So what Disney have done is remake the animated Lion King in the totally different form of… animation.

Yeah, you probably knew all that already, and maybe had similar rants in your own mind / reviews / Twitter feeds / in Wendy’s / shouted at tea, Sue (delete as culturally appropriate). But it remains a relevant perspective on this film, because it indicates the essential question one keeps coming back to when watching it:

Why does this exist? 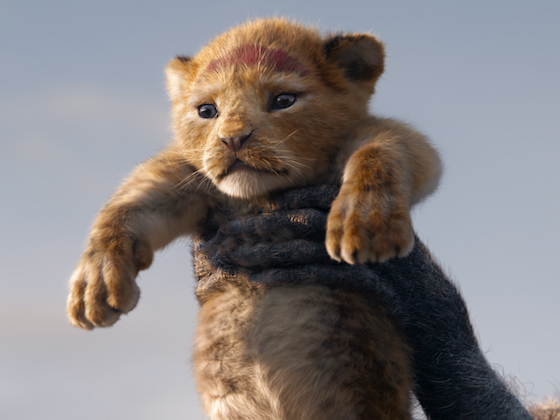 Obviously, the simple and true answer is “to make money”. These Disney live-action remakes have been financial successes, otherwise they wouldn’t keep doing them. The more popular the original animated movie, the more successful the remake. The Lion King is one of the most popular of them all, ergo it was a safe bet to be a big hit. The biggest risk was that “why bother?” question — audiences might’ve felt it was pointless and stayed away — but that didn’t happen: it made $1.656 billion worldwide, making it the 7th highest-grossing film of all time. The original film is down at a lowly 47th. If you were the kind of person who thought box office numbers were the be-all and end-all, you might conclude that this film is even better than the already-classic original. It is not. That it did well at the box office is no surprise — I think there’s a massive curiosity factor involved in these remakes (how faithful will they be; what will they have added or taken away; how will this familiar tale look and feel in a new medium) — but that would only get it so far, and most of it would come from opening weekend. Something obviously worked for audiences, because they must’ve kept coming back.

Well, I can’t explain that one for you. On my first viewing, I didn’t think it was a particularly good film. I rewatched it last night, this time in 3D, and enjoyed it a little more second time round. In part that was because it has really good 3D. Indeed, the praise I’d read for that version was the only reason I was tempted to give the film a second look, and it didn’t disappoint in that department. Whatever you make of the rest of the movie, the photo-real CGI is undeniably a phenomenal technical achievement, and it’s only improved by the life-like dimensionality brought by 3D. With a screen-filling 1.78:1 aspect ratio, it really is like looking through a window. Beyond that, though, I liked the film itself a little more. That’s probably down to expectations — not that I was expecting great things on my first viewing, but knowing exactly what was coming, being fully aware of all the disappointments in store, mitigated them somewhat, and so I was able to enjoy the bits it did well.

Nonetheless, I think the best way to sum up the experience is to say it’s like a cover song from a TV talent show: a reasonable approximation of the original, although clearly not as good, with unnecessarily added riffs and tricks as the cover artist struggles in vain to “make it their own” while not fundamentally deviating from what made the original so beloved. The trailers made it look like a shot-for-shot remake (possibly deliberately), but director Jon Favreau insisted it wasn’t. He’s right, but it might be better if he had been slavishly faithful, because when he strikes out in a different direction it undermines some of the best bits of the original. At least two songs are rendered as damp squibs by less-imaginative staging, while Can You Feel the Love Tonight is for some reason staged in the afternoon. But even more poorly handled is Be Prepared. It’s perhaps the greatest villain’s song in the Disney canon. You might’ve thought it was impossible to ruin a song so inherently fantastic. I certainly did. Sadly, Favreau has proven us wrong.

The voice cast are uniformly adequate, with a couple of standouts. The major one is Chiwetel Ejiofor, who gives a suitably menacing and conniving performance as the treacherous Scar. It’s at least the equal of the original, which considering that was performed by villain par excellence Jeremy Irons is saying something. (Be Prepared is obviously a black mark against this interpretation, but it’s not Ejiofor’s fault he was lumbered with an underpowered rewrite.) James Earl Jones reprises his commanding performance as Mufasa from the original movie. Actually, I don’t know whether he performed it anew or they just recycled his original recordings. You assume the former, but the film is so faithful that the latter may have sufficed. Elsewise, it’s the comedy parts that are given room to shine, with a nice double act from Billy Eichner and Seth Rogen as Timon and Pumbaa, and John Oliver nabbing the lion’s share of the best lines as Zazu (pun very much intended). 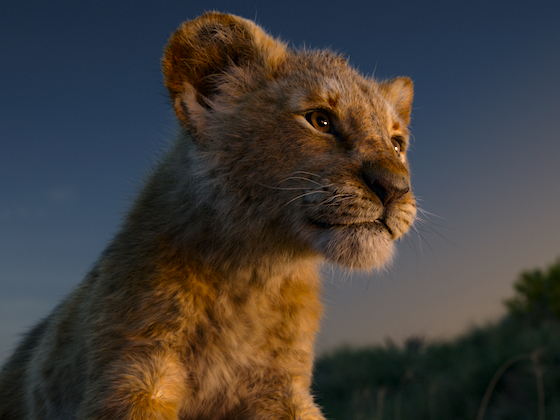 This remake has enough residual quality leftover from the original film to tip the scales into the “didn’t hate it” category. More critical viewers may not be so kind — indeed, they haven’t been. Conversely, those who are less demanding may find the result reasonably likeable (I first saw it with my mum, who thought it was a pleasant couple of hours at the cinema). Still, even with all the technical prowess on show, it can’t replicate either the magic or the majesty of the original animation.

The not-live-action live-action Lion King is on Sky Cinema from today.