Surprised-announced by co-writer/director Colin Trevorrow on Twitter just a week ago (although, reading about it after the fact, it seems dedicated fans were already aware something was coming thanks to that regular modern blockbuster spoiler source: action figures), Battle at Big Rock is a short film entry in the Jurassic Park/World franchise, which premiered on the US FX channel on Sunday night (early Monday morning for us Brits) and is now on YouTube.

Set one year on from the cliffhanger-ish ending to the last film, Fallen Kingdom, this short presents a vignette in the Jurassic world that will help bridge the gap between the previous feature and 2021’s third/sixth instalment. But aside from that large franchise-minded goal, it’s also a chance to see some different characters have a different kind of encounter within the films’ universe.

Well, I say “different” — dinosaurs fight dinosaurs until humans are caught in the crosshairs, then a big toothy dinosaur goes after said humans. The real difference is that this happens to just an ordinary family out on an ordinary camping trip in California, not people who’ve chosen to go to a remote island filled with giant prehistoric lizards. Of course, they’ve decided to go camping in a region where it’s known a bunch of the aforementioned giant prehistoric lizards escaped a year ago and might be roaming about, but whatcha gonna do? When you gotta go camping you gotta go camping, I guess. Also, they’re not white, which is a notable characteristic in this franchise, unfortunately. (That lack of representation across five feature-length movies is hardly rectified by one short, but I’m certain it was part of the intention.) 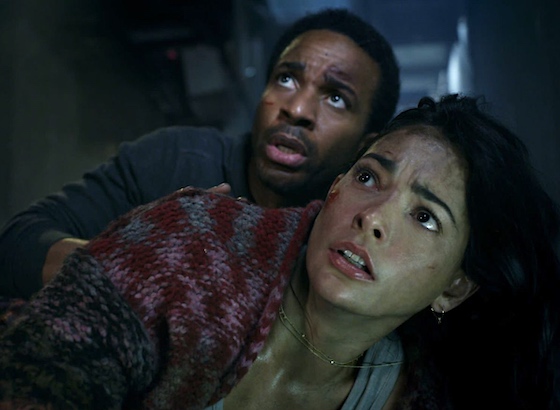 What Battle at Big Rock lacks in originality it makes up for with brevity. This is a concise hit of dino action, cramming many of the franchise’s familiar thrills into a sub-nine-minute package. It also looks great for a short film. Yeah, sure, it still has the backing of Universal Studios — this isn’t exactly an indie production — but it’s not got the full weight of a theatrically-released blockbuster behind it, either. Nonetheless, it manages to include two species of dinosaur, one achieved via a mixture of CGI and a genuine animatronic, and adventure-movie set-piece-level action. It all looks mighty pretty too, although the nighttime fire-lit photography is no doubt partially about hiding the budgetary limitations.

Indeed, the film’s production is possibly its most impressive aspect. It was actually shot back in 2018, so they’ve kept it hush-hush for the best part of a year. And it can’t be easy to keep quiet a film shot on location, and outside of moviemaking’s usual stomping grounds, in Ireland, where apparently there’s a grove of trees that look exactly like a North Californian national park. Presumably the real deal was a no-go because they’d’ve been spotted even more easily there; but, equally, you’d think a big American production team rocking up in Ireland would attract attention — especially when they had a giant animatronic dinosaur in tow. Maybe the locals just presumed it was Game of Thrones…

Anyway, the end result is a success, both as a little burst of dinosaur action for those of us who enjoy such hijinks, and as a tease for events we’ll see in the franchise’s next major instalment. Rumour has it the short’s budget spiralled beyond the limits Universal originally set, but, considering the ill-will generated by the underwhelming Fallen Kingdom, I’m sure they’ll consider the audience’s re-stoked interest (a sentiment I’ve seen expressed repeatedly across social media today) to have been a worthwhile investment.