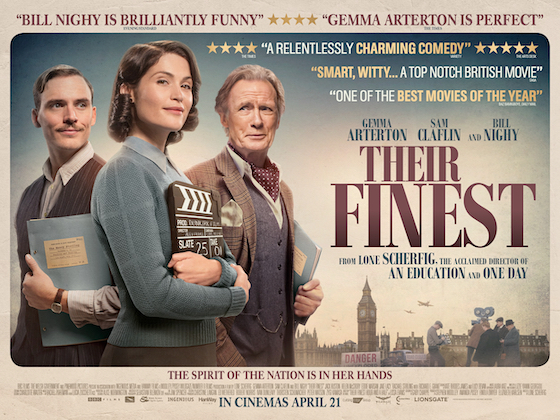 One of three Dunkirk-related movies released in 2017 (which is a bit random — it wasn’t a particular anniversary or anything), Their Finest is adapted from a novel by Lissa Evans called Their Finest Hour and a Half, which is a much better title. “Their Finest” is kinda bland and meaningless — slap it on any wartime film and it’d work just as well. The original title is a neat pun, though, mixing the famous saying (which comes from a 1940 Churchill speech, if you didn’t know) with the common running time of a movie, thereby indicating when the story is set (World War 2), what it’s about (the making of movies), and indicating a tone (it’s a pun, but not an outrageous one, suggesting lightness without going full-blown comedy). Maybe someone noticed this runs nearer two hours and didn’t want to give audiences the wrong idea…

Their Finest Hour and a Half stars Gemma Arterton as Catrin Cole, a young woman in wartime London who finds work writing female characters’ dialogue in movies — “the slop”, as it’s derisively called by her combative superior, Tom Buckley (Sam Claflin). When a news story about twin sisters who took part in the evacuation of Dunkirk is fast-tracked into production, with a cast that includes fading leading man Ambrose Hilliard (Bill Nighy), Catrin and Tom wind up on location with the film, hastily rewriting to include changes mandated by the War Office. Despite Tom’s standoffish attitude and Catrin’s marriage to a good-for-nothing war artist (Jack Huston), who’s jealous of her newfound status as the breadwinner, affection begins to blossom between the two writers…

Yeah, much of Their Finest follows the expected shape of a story like this (the love triangle; the woman coming to be respected by her initially dubious colleagues; etc). Two things work to stop it feeling too staid: an engaging lead cast, and some weightier developments and subplots. The latter includes at least one wholly unexpected twist, which helps make this a more powerful film than the potentially-light “people go on a jolly to make a movie during the war” premise initially seems. There’s a somewhat classical balance of comedy and tragedy there, which is reminiscent of movies from the era the film’s set. Frame it in 4:3, shoot in black & white, and give everyone RP accents, and parts of it could almost be a ’40s melodrama.

Talking of accents, why oh why did they lumber Gemma Arterton with a Welsh one? It isn’t bad, exactly, but I did find it constantly distracting. Presumably it’s because the story is loosely based on the life of Diana Morgan, a Welsh screenwriter whose wartime work for Ealing Studios mostly went uncredited (though she does have one on the famous propaganda film Went the Day Well?, amongst a handful of others), but, considering it’s not actually a biopic, surely there’s no need for the accent? Well, other than to attract funding from the Welsh Government’s Media Investment Budget, I suspect… Anyway, it’s a minor complaint (as I said, her accent isn’t bad), and even with it Arterton is typically charming, generating good chemistry with Claflin, who plays a Mr Darcy-esque role as the initially-unlikeable inevitable love interest. As usual, Nighy threatens to steal the show, hamming it up just the right amount as Ambrose. He gets a significant subplot about his hard-fought transition from leading man to character actor, which also brings in Eddie Marsan and Helen McCrory — just two more high-quality actors helping round out a strong cast, which also includes Rachael Stirling, Richard E. Grant, and Jeremy Irons, among others.

Ambrose is another man who initially misreads Catrin but eventually comes round to her. I suppose the “a woman proves her worth” element is another that’s been well-worn, but it seems fitting here, given that women in the film industry are still struggling to be treated equally. In this case, it’s using the “women suddenly in the workplace” reality of WW2 to make it both feel relevant to the present while remaining era-appropriate, unlike so many period movies that project present-day values onto eras where they don’t truly fit. It’s not as heavy-handed in its moralising as others can be, either.

Indeed, I’d say the entire film is very well pitched. It straddles the comedy-drama divide skilfully, entertaining as a jolly romance set in the world of moviemaking, but with enough grit from the reality of wartime to give it an edge. Everyone involved has, I’m sure, given it their finest hour-and-a-half(-and-a-half).

The UK TV premiere of Their Finest is on BBC Two tonight at 9pm.

* It’s rated R for “some language and a scene of sexuality” — there’s a couple of “fucking”s and a brief glimpse of one practically-silhouetted breast. God, the MPAA are daft. ^