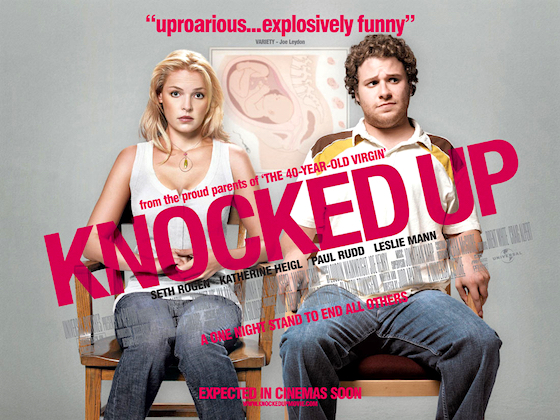 I don’t really know why I watched this. Well, I do: it’s because it’s been on one of my 50 Unseen lists for over a decade (as have 14 other 2007 films, of course, but I intend to get round to most of those too), and at the time it was available on two different streaming services, so it sort of sat there going “why don’t you watch me? Go on, watch me!” until I did. And then I actually quite enjoyed it.

It’s about career-driven Alison (Katherine Heigl), who ends up having a drunken one-night stand with freeloading pothead wannabe-porn-website-designer Ben (Seth Rogen). She gets pregnant, and suddenly the mismatched pair are connected for life. Despite the raucous setup, it’s actually a surprisingly sweet, warm, heartfelt movie… with dick jokes. Maybe that’s why this Judd Apatow-masterminded stuff has been such a success: it manages to simultaneously hit two demographics (essentially, rom-coms and frat-coms) that used to be mutually exclusive.

Alongside that main story there’s a subplot featuring Alison’s sister, Debbie (Leslie Mann), and her husband Pete (Paul Rudd). They’re established as supporting characters, but that feels like underselling it — they’re practically co-leads, given the amount of screentime that’s spent on their storyline. You could probably trim much of their stuff out and make a more efficient, more comedy-length movie; but then you’d really be losing something, because it’s actually quite good, mature, genuine material. But it’s just that’s not what this movie is — or, at least, not what it purports to be — and so it’s, like, why is that here? Why isn’t it off somewhere as its own movie? (Debbie and Pete were later the stars of a spin-off, This is 40, which was billed as a “sort-of sequel” — considering they’ve got such major roles here, I can see why. It makes me wonder why they didn’t get Heigl and Rogen back and just go the whole hog, but that’s a question for another review.)

Anyway, being too long was Knocked Up’s biggest problem, in my opinion — chop out 20, even 30 minutes (heck, do it properly and get rid of more, even) and I reckon it’d be better. It’s also a bit needlessly crude, I guess, but I’ve seen far worse and less funny examples of that. It makes up for it by how well-handled the more dramatic parts are. Overall, I liked it a lot more than I expected I would.