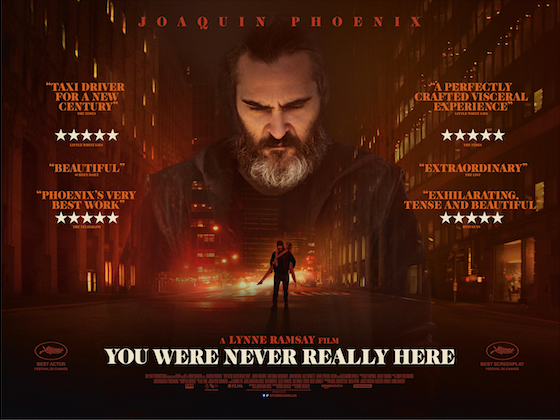 Writer-director Lynne Ramsay tackled serious dramatic subjects in her previous features (none of which I’ve seen, I’m ashamed to say, so I apologise if my “this is a change of direction” intro is off base), but here shifts into genre mode to adapt Jonathan Ames’ noir-ish crime-thriller novella, albeit while retaining a good deal of the arthouse idiosyncrasy you’d expect.

The film follows Joe (Joaquin Phoenix), a middle-aged-or-so guy who lives with is elderly ailing mother (Judith Roberts), and seems even more tired of life than she is, plagued by memories of things he’s witnessed. That history has given Joe a (as Liam Neeson would put it) very particular set of skills, which nowadays he puts to use for private clients, via multiple middle men, primarily (or wholly — the film doesn’t clarify) to rescue abducted children. But when he’s hired to rescue a US senator’s wayward teenage daughter (Ekaterina Samsonov), things end up going sideways in unforeseen ways.

Joe’s weapon of choice is a hammer. He uses it to take out multiple Very Bad Men in this film. But if the combination of “genre: thriller” and “using a hammer to take out bad men” makes you think You Were Never Really Here is about to unleash a low-budget action-fest upon your eyeballs, I refer you back to the writer-director being Lynne Ramsay and my mention of “arthouse idiosyncrasies”. I thought I’d mention this point upfront because I’ve seen others be disappointed by the lack of overt action in the film. Ramsay has instead chosen to keep most of the violence offscreen — we sometimes see the build-up or the aftermath, or both, or maybe neither, but only rarely the act itself. It’s not that kind of movie. And that’s not a problem, so long as you’re not expecting those kind of kicks.

Instead, the film becomes more of a character portrait, interrogating who Joe is and why. What kind of man does a job like that? What events in his life brought him here? What toll does it take on him? Or is there no toll because the damage has already been done? Explicitly writing these questions, which the film does seek to consider, causes me to question the worth of a serious-minded exploration of such a character’s psyche. It makes me wonder: are there real-life people like Joe? Does anyone actually do this job in the real world? Is the universe Joe moves in — a netherworld, parallel to our own but hiding from everyday view — a true one, or just the stuff that fills genre fiction? And if the answer to “is this real?” is a “no” — if these characters, situations, and environments are all just genre fodder — is there value in getting psychologically real about it?

Some would say “no”, because we don’t necessarily come to this kind of genre fiction for realism, even when it’s given a dark or gritty spin. I mean, take a slight genre sidestep into something like Paul Greengrass’ Bourne movies, for an example: they’re shot with a documentary-esque style, but no one thinks they’re plausible portraits of real life espionage activities. Stories like You Were Never Really Here have a greater reality claim than that, but I still question their actual adherence to our real world. But surely these extreme spins on reality are invented, at least in part, to justify simultaneously inventing heroes to put into them, who can then sort it all out by wielding some weaponry and special skills that we might not accept in a totally true-to-life story-world.

Maybe I’m over-theorising this now. But You Were Never Really Here is the kind of movie that leaves gaps to invite you to think about it, to fill in your interpretations and personal notions. It’s a film with a lot of quiet space — literally, in the sense of its often minimal dialogue and, shorn of action scenes, little of the thudding and thumping you’d expect in the sound department; but also figuratively, with long scenes that make room for you to think about what you’re witnessing; scenes that don’t hand-feed you every piece of information, so you put it together yourself. (If you want an example: no one ever tells you where Joe got his skills, but flashbacks give you visual clues to put it together.) Maybe the film isn’t trying to say “guys like this exist outside of genre pieces, and they’re like this” — maybe it’s saying “if guys like this existed outside of genre pieces, what would they really be like?”

In the source novel, the title is explained via Joe’s methods: he uses fake identities, surgical gloves, and hides from cameras, all so that he was “never really there”. In the film he’s more low-tech and somewhat less scrupulous, meaning the same explanation doesn’t quite wash. I thought perhaps Ramsay meant it to have a new, arty meaning. Maybe it doesn’t — maybe it’s just the title of the book, so it stayed. Or maybe everything I’ve written is right, and people like Joe were never really here, in the real world… but if they were, they’d probably be like this.

The UK network TV premiere of You Were Never Really Here is on Film4 tonight at 9pm.