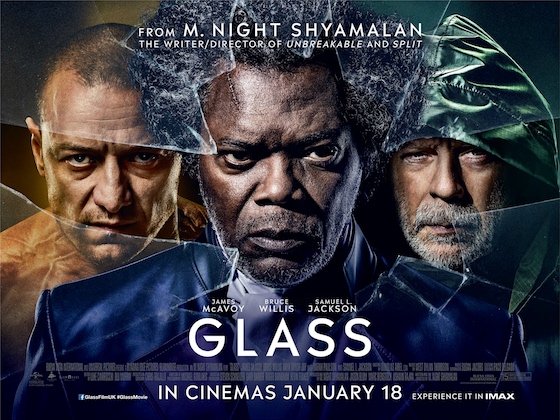 About 18 years ago, I first watched Unbreakable on DVD. It was the new film from M. Night Shyamalan — a name no one knew a year or two earlier, but the huge success of The Sixth Sense had somehow catapulted him to the top of the zeitgeist, where he was talked about as the new Hitchcock or Spielberg. Maybe no one could spell or pronounce it (I remember a lot of “Shamalamadingdong”s), but for some reason this wasn’t just “The New Film from the Guy Who Directed The Sixth Sense“, it was “The New Film from M. Night Shyamalan”. Anyway, it had met a mixed reception, but for some people it worked, and I joined their ranks. From there, it seems to have developed something of a cult following — it has many ardent fans, but others still don’t get it.

In interviews, Shyamalan mentioned that Unbreakable’s plot had originally been just the first act of the film, until he decided to expand it to the whole movie, and so he had ideas that acts two and three might become two further movies and form a trilogy. There began a long wait for the film’s fans, ever hoping that one day Shyamalan — whose reputation went steadily and increasingly downhill with every film he made from that point — would come back round and continue what he’d started. I can’t speak for everyone, obviously, but I’d begun to give up hope: in December 2016, I added Unbreakable to my 100 Favourites series, and in that post I wrote, “16 years on, I guess hopes of a continuation are long dead.”

…but in case you don’t: Split was a stealth sequel to Unbreakable, only revealed in its very last scene when Bruce Willis suddenly appeared and name-checked Samuel L. Jackson’s character. I say “only” revealed — I found out on Twitter, the first day after the film went on general release. Damn you, internet! But anyway, the point is: suddenly the hope was back alive. And it was confirmed to be so shortly afterwards, when Shyamalan announced that a sequel to Unbreakable and Split had been officially greenlit.

Now, I’ve devoted a massive chunk of this review to that history lesson for one reason: to make it clear just how much I was anticipating this movie. I’m certainly not alone in that; but if you’re not someone who saw Unbreakable almost two decades ago and have been hoping for a sequel ever since, I hope the last few paragraphs gave you some perspective of how those of us who did feel about Glass finally being here. This is my most anticipated superhero movie in a year that also includes an Avengers that will tackle the fallout from a humungous cliffhanger, a new X-Men (a series I also love), a new Spider-Man (which I think looks great), and more (the most superhero movies in one year ever, apparently). So, for some of us, this has a lot of expectation to live up to.

And I think expectations — whether they come from the previous films, the trailers, critics’ reviews, or what have you — are going to have a big effect on people’s reaction to Glass. Expecting a Marvel-style superhero throw-down? It was never going to be that, you fool. Don’t like movies where most confrontations come through dialogue? Okay, but did you actually watch Unbreakable and Split? (Those are both criticisms I feel I’ve seen in other reviews I’ve read.) Want to see Bruce Willis and Samuel L. Jackson face off again in a film that’s fundamentally Unbreakable 2? That’s not an unreasonable hope, but Glass is as much a sequel to Split as it is to Unbreakable, perhaps even more so. Certainly in tone, Glass has more in common with the slightly-pulpy, almost-B-movie style of Split than it does with the quiet, characterful mode Unbreakable operated in. That first film was a Drama, all about believable people coping with their personal issues, whereas the two follow-ups are much more genre movies. That said, they’re still genre movies that have been filtered through the unique mindset of this particular writer-director — don’t expect a great deal of easy satisfaction here.

Do expect twists. Of course there are twists — it’s a Shyamalan movie! Indeed, it’s almost the most Shyamalany of Shyamalan movies, because Glass has more than one surprise reveal to pull out during its final stretch. Some are almost obvious, especially if you’re aware of fan theories from the previous films. Some are entertaining, the kind of rug-pulls you’d expect in the last act of a movie whose villain is a genius. Some are… more startling. Some people will appreciate the boldness; others will feel it undermines what came before, or what they wanted to see here. I don’t think anything is an outright “that doesn’t make sense” betrayal of the world Shyamalan has created in this trilogy, but some people will be displeased about the directions he chooses to go.

Talking of which, one of the big complaints I’ve read (and, fair warning, kinda-spoilers follow for the rest of this paragraph) is that the middle of the film wastes time trying to convince us these characters’ powers aren’t real, when we’ve already seen that they are. I think that’s a somewhat unfair criticism; one that comes from not properly investing in what we’re watching. Dr Staple is trying to convince the characters of reality, that they can’t have powers; and, as I saw it, the point of those scenes is to make us doubt it too. Yes, we’ve seen them do extraordinary things, but as Dr Staple lays out, can those things not just be explained by science and/or personal delusion? They’ve shown special skills, but are they really superhuman abilities? Several characters are swayed by her argument… so was I, to a point… except then I remembered the critics who’d said this was “a waste of time”, and therefore I guessed Shyamalan couldn’t be building to a reveal that these characters didn’t have powers after all, because if he were then it wouldn’t be a waste of time. So thanks for that, whichever Negative Nelly’s review I read that spoiled it.

As Dr Staple, Sarah Paulson is the main new addition to the cast for this finale. Her character’s a bit of a blank slate — we don’t really get to know her, why she’s doing this job, why she believes their powers can’t be real (other than the sheer implausibility of it, anyway). She exists to challenge the leads and their beliefs, not really to be a character herself. Or is that blankness just a facade, and that’s its point? I’ll say no more both out of an awareness of spoilers and because I’m not sure myself. It’ll be interesting to rewatch the film and see what, if anything, else presents itself about her on a closer rewatch.

Despite having the title role, Samuel L. Jackson is mainly reserved for the third act, but when he comes to life he revels in the part so much that I didn’t mind having to wait. James McAvoy gets to show off like he did in Split, only this time with an even greater number of distinct personalities. Some people think he’s overacting; I think it’s impressive. Split was more of a showcase for his skill, because here he has to share screen time with so much else that’s going on, but Shyamalan helps him out by actually giving different alters their own separate character arcs. In places that’s done quite subtly, so I think some might miss just how much McAvoy has to do.

While McAvoy gets to negotiate multiple arcs, the last of the three headliners, Bruce Willis, barely has one. Some have said he phones in his performance here, but I think that’s unfair. Shyamalan hasn’t actually given him that much to work with, which is a shame — some people will feel like they’ve waited almost two decades to get more of David Dunn and been shortchanged. Well, David was always a quiet, introspective character anyway, so in some respects it’s fitting. In the two or three scenes where he was allowed to really do something, I felt like Willis had recaptured the part.

It’s not just those four who have a significant role to play, either. For me, Anya Taylor-Joy actually has one of the film’s best parts, and gives one of its best performances. Here, again, is where Glass is at least as much a sequel to Split as to Unbreakable, in the way it devotes time to the development of her character and to her relationship with McAvoy’s. Also returning is Spencer Treat Clark as Joseph, David’s son. I wasn’t sure if this was a case of managing to lure back a child actor who’d drifted off, or if the guy had continued to work since. Well, having IMDb’d him, it turns out he’s been working virtually nonstop since Unbreakable, but it just happens I haven’t seen anything he’s been in (well, except he was in one episode of Mad Men, apparently). His is a somewhat less complex supporting role, but he’s particularly good at conveying Joseph’s thoughts in a few key dialogue-less moments.

But the biggest returnee of all is behind the camera: writer-director M. Night Shyamalan. (Who is also in front of the camera, actually, with a cameo that exists largely to reconcile his cameos in the two previous films. It’s an amusing bit of fan service.) Shyamalan has, I think, always been a good director. He shows a good eye for strong and rich visuals, be they simple face-on close-ups or more innovative shot choices, but without being needlessly flashy. The film incorporates flashbacks using deleted scenes from Unbreakable, which at least one reviewer took to prove Shyamalan has deteriorated as a director in the past 20 years, but I thought they integrated seamlessly. His weakness has always been more as a writer, and your mileage will vary on how much that’s a problem here — as I discussed earlier, it’s quite a talky film, with the characters confined to a limited set of locations, and that likely won’t please some viewers. There’s also some thuddingly terrible dialogue (you may’ve read about the “showdown” line), but he’s been responsible for worse. 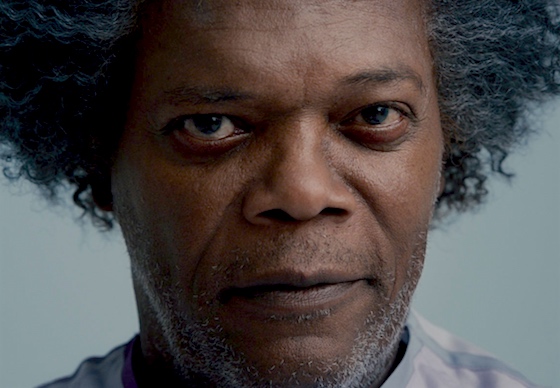 Reading other reviews and audience reactions, it’s clear that Glass is going to be divisive to some degree. In some ways it seems to deliberately confound expectations, which will frustrate some viewers even as it delights others. It’s not interested in being a typical comic book movie, or even really in deconstructing the genre, another thing I think some viewers were expecting it to do. Instead, comic books are a launchpad for its own mythology, and Shyamalan’s own ideas about what’s important from them. In that respect it’s very much his movie, and I think that’s a good thing. It’s not a stone-cold classic like Unbreakable — it lacks the subtle feel for real-life human emotion that makes that film so powerful — but I enjoyed it a lot. I’d certainly rather have something that tries to be fresh, to do something different, to push at boundaries, than an attempt at empty repetition for the sake of easy results.

Glass is in cinemas now.