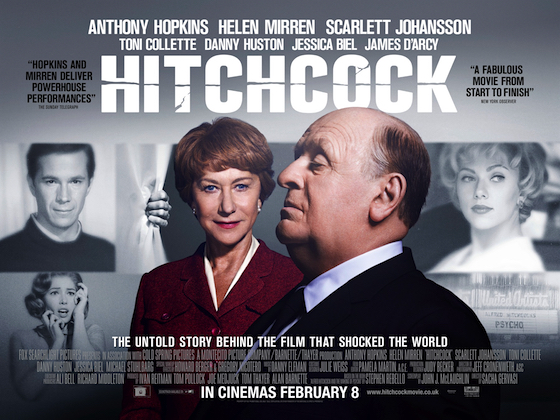 Arguably the most famous film director of all time, it was inevitable that one day there’d be an Alfred Hitchcock biopic. Indeed, as is so often the case in Hollywood with an obvious idea waiting to happen, two turned up at once (the other being BBC/HBO TV movie The Girl). Rather than taking an overview of the man’s life, however, both focus in on the making of a single film — in this case, arguably the one he’s most famous for today, Psycho.

That’s half of what the film’s about, anyway. It’s a mixed success. I’ve no idea how true it is, but the setup — the acclaimed Master of Suspense who’s so established that people are judging him over the hill, determined to do a striking new project no one else believes in to prove he’s still got it — is a good’un. It’s especially effective precisely because it’s about Hitchcock and Psycho: it’s the film that defines him for many people now; so, yes, we know the ending, but that lends dramatic irony — how do we get from that starting point to the acclaimed classic we all know? However, it all feels slightly hamstrung by the filmmakers failing to get the rights to directly recreate any shots from Psycho itself, making it feel like the film is having to constantly pull punches there.

The other half of the film is about a blip in Hitch’s marriage — a storyline which is mostly fictional, unsurprisingly. That Hitch was a pervy old letch shouldn’t really come as a surprise to anyone anymore, but the way the film decides to draw links between the director and twisted murderer Ed Gein (the inspiration for Psycho) is a bit weird. It feels like the scenes of murder, etc, have been included for mere titillation rather than actually revealing anything about the titular moviemaker.

The latter storyline leads to a reconciliatory ending that is cheese personified. By the scene just before that wraps up the Psycho storyline in a much more effective manner, with Hitchcock listening to the film’s premiere screening from the lobby, ‘conducting’ the audience’s screams during the shower scene. It’s probably the highlight of the movie; the main insight into why Hitch ever did what he did, perhaps. (Well, that and all the lust.)

In the title role, Anthony Hopkins is completely submerged as the big man, helped by a pile of prosthetics. Sometimes I think Hopkins is a distinctly overrated actor, but he’s put the effort in here. As his under-appreciated wife, screenwriter Alma Reville, Helen Mirren is superb as ever. The cast is rounded out by a bunch of decently-served small roles, performed by the likes of Jessica Biel, James D’Arcy, Danny Huston, and, in particular, Scarlett Johansson as Janet Leigh. She seems to fit the era perfectly. Inexplicably drawing the short straw is Toni Collette, in a totally nothingy role as Hitch’s assistant. 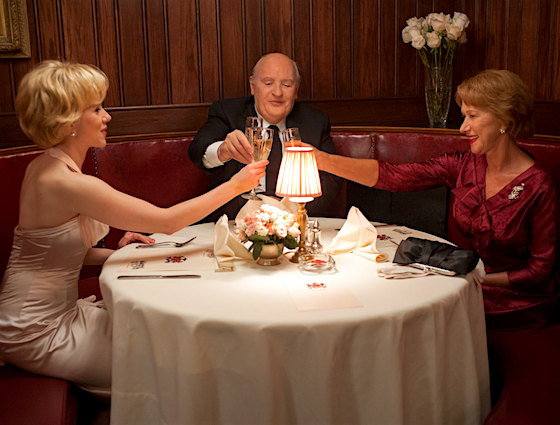 With a running time that barely crossing 90 minutes before the credits roll, Hitchcock feels very slight. This is a small incident in the long and storied life of the great director; and while it may touch on various themes that concerned his whole career, thereby acting as an exemplification for all of them, it still feels more like a vignette than a full-blown biopic.