With the series finale of The Americans on UK TV tonight (at 12:05am on ITV4), I thought I’d bring my monthly TV review forward a bit and share my thoughts on the final season of a series that, for those of us who found it, will be sorely missed.

Plus! The latest episodes of Westworld — much more widely discussed than The Americans, but does it deserve the attention? And quick thoughts on the end of Archer Vice and another series finale, that of Peter Kay’s Car Share.

The Americans  Season 6
“It’s the end of the world as we know it, and I feel fine.” 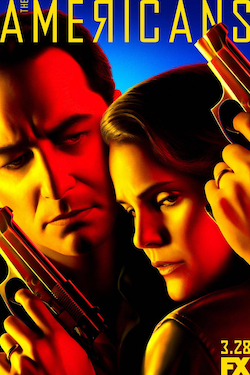 That song was released in 1987, the same year as the final season of The Americans is set. The show has typically avoided featuring well-known music in favour of cult favourites and obscurities, but R.E.M.’s classic would’ve been an appropriate number to hear during one of the series’ trademark music montages in the finale. (That said, it did contain both Dire Straits and U2, so they weren’t above using big hits.) Maybe it would’ve been a bit on the nose, but it certainly was applicable: it was the end of the world as the characters knew it, and so too for fans, as six incredible seasons came to a final end. But do we feel fine? That depends how you define “fine”. The show will be missed terribly, but goddamn if it didn’t stick the landing to cement itself as one of the greatest TV series ever made.

It all began with a good setup for a concluding season: finally, after years of disagreements about their jobs and their personal lives and how both should be handled, the world conspired to pit the Jennings directly — and secretly — against each other. The Americans isn’t usually so overt in its plotting, so it’s no surprise that the scenario doesn’t play out as a straightforward spy-vs-spy battle. But it certainly tests the lead characters both professionally and personally, and to an extent they haven’t been before, forcing them to question every one of their loyalties: to their employers, to their country, to their friends, to their family, and to each other. To say too much about how it unfolds would be a spoiler, obviously, but it has some clever ways of challenging even the characters’ most deeply-held beliefs.

Most spy-based TV shows ratchet up the scale or stakes season after season — I’m thinking of Spooks, where in season two they spent a whole episode debating the ethics of performing an assassination, but a couple of years later that was just routine first-act stuff; or 24, where season one was just about someone trying to assassinate a presidential candidate, but by season four it was about multiple coordinated attacks including bombing trains, kidnappings, melting nuclear power stations, shooting down Air Force One, a nuclear missile strike… The Americans has, if anything, gone in the opposite direction: there’s still spy stuff there, of course, and it’s as grounded as ever, but it’s increasingly taken a backseat to the characters’ relationships. Maybe this is just a matter of perspective, but I felt that in earlier seasons the spy stuff was the focus,

given texture or sometimes affected by the relationships, whereas by this point the relative importance and impact seems reversed. I guess you could still enjoy it as “just a spy show”, but I don’t think you’d want to — the stuff you’re invested in has shifted. That was always the programme’s genius, of course: it’s not about spies who happen to be married, it’s about marriage through the prism of people who are spies.

For a while it almost doesn’t feel like the end (the season opener even begins with a montage set to Don’t Dream It’s Over), but then comes episode five, The Great Patriotic War, and suddenly years of stuff is brought to a head: the status quo and people’s values are flipped, then re-flipped; there are massive changes and developments — but all managed with The Americans’ usual understated believability. As the fallout begins in episode six, Rififi, you can’t tell where it’s going to go. It keeps the focus squarely on Elizabeth and Philip’s relationship, as if we could ever forget the show is, at heart, all about that, not the big spy stuff. The season isn’t just engrossing on a thriller-ish “will they get caught?” level, but also on an emotional “will they stay together?” one. A big part of this is the performances by Keri Russell and Matthew Rhys, both of whom are so, so good — the subtleties and nuances of their performances, and the way the series trusts them to convey what’s needed with just silence at times, is phenomenal. That they haven’t received more recognition for their work here is a crime against television.

The penultimate episode, Jennings, Elizabeth, is where things really begin to come to a head, and Jesus, the tension! It’s hair-raising. It’s intense. It leaves your nerves shattered, not just during the programme but after it too. I’m glad I saved the season up to watch on consecutive days, because I don’t know how I’d’ve spent a week with that hanging over me. And as for the finale, somewhat ironically titled START… I’ve been worried about how they’d end the show basically since it started. I spent that last hour covered in goosebumps and with my heart in my throat, and it was kinda perfect. It didn’t give me everything I wanted, but perhaps it gave me all that I needed.

As a commenter on the A.V. Club’s review put it, “I have to say it is of greatest compliment that the show both wrapped up the story and left me wanting more. It felt equal measure satisfying and gut wrenching.” That’s exactly how I felt. Also, it contained what I have no qualms about calling one of the greatest scenes in TV history: just a handful of characters talking in a garage, and it was absolutely stunning, the true culmination of the entirety of the show.

If you haven’t been watching The Americans (and viewing figures suggest you probably weren’t) then do yourself a favour and rectify that at some point — a 75-episode masterpiece awaits. Without doubt, one of the greatest TV series ever made.

I wrote last time about how Westworld season one took a few episodes to warm up but eventually got me completely hooked. Season two is so far failing to pull the same trick — over half the season has felt like it’s still just getting underway to me. And then, in the blink of an eye, episode seven, Les Écorchés, catapults us from “just getting started” to “endgame” over the course of an hour. I’m not sure how I feel about all that. There’s some exciting and interesting ideas in the mix here, but what also feels like a bit of flailing around. Maybe it’s all in aid of a Big Surprise? Season one certainly had a few of those in its final episodes — they were the most talked-about part of the show in the end, I’d wager — so I assume they’re going to end up shooting for the same.

One thing they’ve definitely copied from that freshman run is the multiple timelines. Back then it was a secret, and it ultimately paid off, but now it’s out in the open, and I’m not sure what it’s for. I mean, there are some very basic uses in play — “how does Character X get from that situation in the past to this situation in the present?”, “where have half the cast gone between the past and now?” — but that seems a bit… facile. As I say, I hope they’ve got some surprise to pull out of their sleeve — something to do with how the hosts struggle to differentiate between memories and current events, perhaps — but it’s a long time coming…