Yes, I am very, very, exceptionally late to the party here. For example: whenever I watch a film I log it on Letterboxd, then have a scan through the ratings my ‘friends’ have given it, whether that’s just one other person or a few dozen. This had by far the highest number of ‘friends’ who’d already seen it that I’ve ever encountered. And it was on Letterboxd that I first encountered La La Land, in fact, when it started screening at festivals in the latter half of 2016 and everyone was raving about it. It was a must-see long before the Oscar buzz started to build, and obviously that only intensified the film’s reputation. It’s a lot of anticipation to heap upon one movie. Fortunately, La La Land can bear it.

For anyone who’s even later to it than me, it’s the story of aspiring actress Mia (Emma Stone) and aspiring jazz musician Sebastian (Ryan Gosling), who encounter each other randomly, initially hate each other, but fall in love. Don’t worry, I haven’t spoilt the ending — there’s more story beyond that typical romance plotline. And much of it is told through the mediums of song and dance. 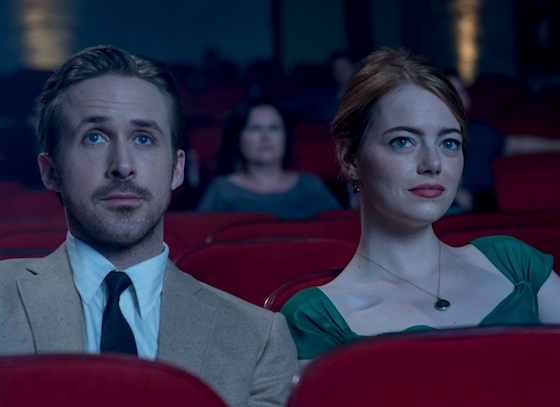 La La Land isn’t “kind of a musical”, or “I suppose you could call it a musical”, or “a film with songs, a bit like a musical” — it is a Musical. And while the leads can’t really sing, that doesn’t stop there being some beltingly good numbers in it — though, for my money, the best either (a) don’t involve the leads at all, or (b) don’t involve singing. Coincidentally, two of those are the set pieces that bookend the film. The opener is a colourful stunner, a bright and breezy singalongathon on a gridlocked freeway, made even more enjoyable by being realised in a (faked) single-take. Related thought: I feel like we need to bring back done-for-real oners — people are faking them too easily and too often nowadays. Though, saying that, another particularly joyful sequence is the dance routine that adorns the poster. Its success lies in part with Gosling and Stone’s well-performed moves, but also, like the opening number, with how well shot it is. I assumed it was done on a set with some CGI’d backgrounds and probably some invisible cuts, but no, it was achieved on location, the shoot squeezed into the real ‘magic hour’ — actually a half-hour window — and is, I believe, a genuine single take.

Now, the other bookend is (obviously) the ending. Well, I think they actually label it an epilogue, because its events occur after the main story; but an epilogue is an addendum, isn’t it?, and I reckon this final sequence is as vital as any other part of the film. It’s how the story really ends, and it’s an all-timer of a finale. That comes both from the tone it takes (no spoilers here, but see my Letterboxd comment) but also the sequence itself, a stunning marriage of visuals, soundtrack, and meaning — and I say this as someone who (for a pertinent example) disliked An American in Paris specifically because of its extended ballet bit at the end. Damien Chazelle well earned his Best Director Oscar.

Speaking of which, I must mention what went down at the Oscars. Well, not so much the snafu itself (though that made for great telly), but the ultimate result. I think there can be little doubt that Moonlight is a more significant film for our times, for all kinds of reasons, and it’s certainly a quality work of filmmaking in its own right, but La La Land is a more purely enjoyable cinematic experience, with just enough grit in the mix to stop it being too sappy. I don’t resent Moonlight its victory, but I’d’ve voted for this.

The 2018 Academy Awards are handed out tonight from 1am GMT.